It's unfortunate Wolfgang Halbig has wasted so much donor money pursuing lawsuits against bloggers or perhaps he would have the money he needs to get documents from Connecticut, as he promised.  - Sandy Hook Facts

Wolfgang Halbig will be in Connecticut for a FOIA Hearing on Feb. 18, 2016.

Just before announcing to his cult-like followers that he was closing up his Facebook due to some odd, unexplained fear of a drone strike, Wolfgang announced he would be flying into Connecticut on Feb. 17, 2016 for the hearing.    Wolfgang refused to provide details of the case to his followers.

No, Wolfgang did not make it clear how closing his Facebook down would protect him from the hallucinatory Halbig-seeking drones he fears.

Wolfgang also announced that he would once again be with a film crew from "Caravan to Midnight". Newtown would be prudent to be prepared for Wolfgang's arrival. Wolfgang has been removed with trespassing warnings from several properties in and around Newtown and the last time Wolfgang and his "Caravan Film Crew" were in Connecticut, security officers at St. Rose Lima School called 911 reporting the unauthorized filming of school children. 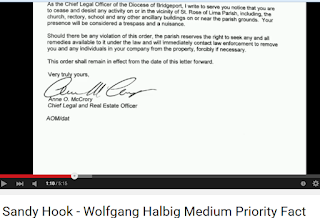 Wolfgang has also publicly announced he plans to find "Mr. Urbina"; therefore, certain families in Newtown should reasonably be concerned.

"Be On the Lookout" - Jonathan Reich  - Arrest Warrant

Jonathan Reich often travels with Wolfgang Halbig.  Presently, the State of Connecticut holds a $100,000 warrant for Reich's arrest for failing to appear to answer for charges stemming from alleged harassment in the wake of the school shooting.

Jonathan is presently on the run while he launches fundraisers pretending that Connecticut is the one delaying the trial.

The below photo, a screen save from one of Wolfgang's visits to Connecticut, is one of the most recent photos of the fugitive.    If you see Jonathan Reich, please call 911 immediately.  It is not advised that you attempt to apprehend him without Police assistance. 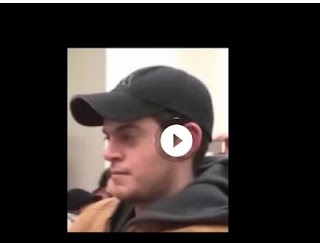 This is his well known mug shot for his arrest as reported by several main stream media outlets:"

Wolfgang has withheld the details of his upcoming hearing from his donors and followers; however, it is believed Wolfgang will be seeking the following items at the hearing:

1. Dashcams from Bahamonde and Chapman.  These videos are known to contain sequences of minor victims and /or witnesses and therefore claimed as exempt from disclosure by Connecticut Law. For example, Chapman's vehicle is known to have faced directly towards the North East Corner of the school. This is the door from which most children evacuated; therefore, hundreds of children would have been captured on this video.  The chances this video is released is nil.

2. Dashcams for Sinko and Seabrook.  These videos have already been released by Newtown.  CSP is referring Halbig back to Newtown to get these copies.  It is possible the FOI Commisison orders these re-released to Halbig.

The actual documents, to the extent they exist, were never released with the final report. Instead, CSP claimed an exemption applied to the "witness statements"; the CSP released a summary of the officer's statements (Rios Doc # 43911 and Vanghele.  Doc # 2060).

Sandy Hook Facts has never agreed with CSP's position on releasing summaries of the statements, so if Wolfgang is successful at getting the actual documents released, over a claimed exemption, that would be beneficial (not to mention extraordinary).

It's unfortunate Wolfgang Halbig has wasted so much donor money pursuing lawsuits against bloggers or perhaps he would have the money he needs to get documents from Connecticut, as he promised.

In any event, based on the displayed competency of Wolfgang and his counsel at the last hearing, it is not likely the Halbig side has the skill to prevail; but one never knows.     A ringer re-request like the Sinko / Seabrook videos makes at least a small Halbig victory possible.

CSP Not likely to Comply with FOI Commission without court order
Connecticut State Police are very stingy with the release of documents.  Dave Altimari prevailed at the FOIA Commisison hearing regarding documents related to the shooter; Altimari's case remains on appeal with the courts; CSP still has not released a single document based on the FOI Commission ruling in favor of Altimari.  The 911 calls were similarly not released until ordered by the court.

All FOIA requests by Sandy Hook Facts to CSP for documents have been ignored or denied; however, we do not have the means to pursue them further and have abandoned the requests.

Any idea if this hearing will be televised like the last one?

No I dont sorry