"Connecticut residents should never trust anything coming from Ablechild. What else do they leave out when it suits their agenda?"


Ablechild is a group of radical conspiracy theorists who have become well known supporters of Sandy Hook Hoax Group.  Today, Ablechild continued their dishonest disinformation campaign in regards to the Sandy Hook Shooting. Ablechild falsely contended, as they have in the past, that "Bushmaster" would have an easy time illustrating that the [Sandy Hook] bullets didn't come from their guns."

Ablechild has bragged they have extensively studied the report.   The group has conducted FOIA requests and published numerous articles on Sandy Hook. Since the information presented here is from the easy to read, 48 page summary report, Ablechild know's or reasonably should know the truth.  We can therefore impute dishonest intent with their claims.

This is why Connecticut residents should never trust anything coming from Ablechild. What else do they leave out when it suits their agenda?  Children are too important to even consider a deceptive "truther" organization like Ablechild.

Sandy Hook facts will present the information from the report that Ablechild does not want their followers to know. 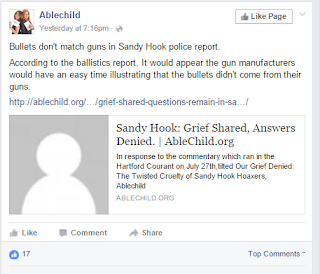 "Bullets don't match guns in Sandy Hook police report.  According to the ballistics report, It would appear the gun manufacturer would have an easy time illustrating the bullets didn't come from their guns".


The post is in regards to the fact that  numerous Sandy Hook Families are suing Bushmaster.

Like most conspiracy theorist websites, Ablechild's support for their claim is THEIR OWN link.  Their previous misinformation is their "reference".

Their reference post contains this as their sum total of relevant information:

"Additionally, in regard to investigative questions, one cannot help but wonder what the odds are that 148 bullets/bullet fragments were extracted from the crime scene and none – zero – can be matched to the barrel of the Bushmaster Rifle reportedly used in the shooting incident."

Ablechild intentionally misleads their audience into thinking that the gun manufacturer (Bushmaster) can easily show (in the Parents vs Bushmaster lawsuit)  that their weapon didn't commit the carnage because the bullets don't match.

In reality, that is not Bushmaster's defense at all.  Bushmaster  is claiming a Federal law exempts them from the lawsuit.  Federal Law exempting Bushmaster is fairly clear; that law will be  a significant legal mountain for the Sandy Hook Families to climb.  Sandy Hook Facts has a tendency to believe that at some point in the proceedings, Bushmaster's argument will prevail; on appeal or otherwise.

Bushmaster is not attempting to show, nor will they attempt to show that their manufactured weapon did not do the damage  because the report makes it clear that the scientific testing shows that the Bushmaster AR-15 WAS the weapon used.

Let's look at the facts.  The summary final report can be found here:
http://www.ct.gov/csao/lib/csao/Sandy_Hook_Final_Report.pdf

Ablechild cherry-picks the first sentence out of the following paragraph as the basis for false talking point; they intentionally omit the rest of the paragraph's information:


“No positive identification could be made to any of the bullet evidence submissions noted …in 5.56 mm caliber. The physical condition of the bullet jacket surfaces were severely damaged and corroded. They all lacked individual striated marks of sufficient agreement for the identification process. The test fires also exhibited a lack of individual striated marks on the bullet surface for comparison purposes. This condition can be caused by fouling in the barrel of the rifle and the ammunition itself. The Bushmaster rifle cannot be eliminated as having fired the 5.56 caliber bullet evidence examined,” quoting from the 6/19/13 Forensic Science Laboratory report.


Obviously, Ablechild leaves out the fact that the bullets matched the bullet fragments found in that, due to barrel fouling, individual striated marks were not found, even in test fires with the weapon after the shooting.  Moreover, the Bushmaster could not be eliminated as having fired the bullets.  In testing, these iarr extremely significant finding md and cannot be fairly parsed out.

Ablechild also completely omits the fact that every single shell casing found at the shooting matches the weapon.


The following weapons were recovered in the course of this investigation: (1) a Bushmaster Model XM15-E2S semi-automatic rifle, found in the same classroom as the shooter’s body. All of the 5.56 mm shell casings from the school that were tested were found to have been fired from this rifle.

When you have a 5.56 weapon found on scene that can't be eliminated as having fired the bullets and expended casings that are a 100% match for the weapon, that is conclusive evidence.   Add to it the fact there was victim DNA splatter on the weapon and shooter DNA on the weapon; this is "case closed" on the murder weapon.

Hoaxer organization Ablechild's contention that Bushmaster would have an "easy time illustrating that the bullets didnt come from their guns" is completely false on it's face; misinformation by an organization of dubious intent.


Presented by SandyHookFacts.com at 8:52 PM

Sheila Matthews is a wanna-be important person. She leads a feckless organization that constantly attempts to insert themselves into conversations and issues as though they are some type of "expert". She/they are not.

All of Connecticut should be disgusted with her organizations support of Halbig and his hurtful, dishonest movement.

Bring awareness to Hoaxer activities & prosecute those who consciously, publicly defame, harass and emotionally abuse the victims of high profile tragedies. Send us report about your harassment in our webpage http://honr.com

I think Sheila Matthews sees an opportunity to make a name for herself and her organization. Sadly, it's going to turn out just like Tracy and Halbig...discredited and delusional.

She should have her tax exempt status revoked. She has hurt people with her blatant lies and has recently reported that a doctor was responsible for the death of a patient that he never treated due to the fact he no longer was working at the hospital. She has been making up lies for her tax exempt organization that gives her a paycheck and expense account. Recently she has published so many lies regarding a case under the guise of her non profits mission. Raising money through lies is not only fraud but is subject to libel and slander. She does more harm to people then she does good and she is rewarded with donations and expense accounts.