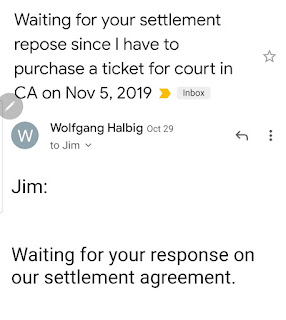 The stage has been set for what is hopefully the last round of the four year legal battle - Wolfgang Halbig vs Sandy Hook Facts.

As many know, in 2015 Wolfgang Halbig violated free speech when he attempted to use the courts  to silence Sandy Hook Facts.

The case has trogged through the courts for years; however, it appears to be drawing to a final conclusion.

On 9/17/19, on remand from appeal, the trial court will hear oral argument on the amount Wolfgang Halbig owes Sandy Hook Facts.  The only issue on the table at the hearing is "How much" is owed to SHF.  SHF filed briefs seeking compensation for the rightfully owed amount of nearly $300,000.

That amount could go up, depending on actions of Halbig and findings by the Court.  Halbig, of course, filed briefs attempting to duck his obligations entirely.


A brief background -
Wolfgang Halbig, with his attorney, Orlando based Cynthia Conlin, filed suit against a people who were speaking out against Halbig's vile lies and defamation of Sandy Hook families and victims.  Debunking Halbig was hurting the fundraising. Cynthia Conlin and Halbig wanted the opposition silenced.

A lawsuit to silence people is called a SLAPP suit (Strategic Lawsuit Against Public Participation).  While Halbig and Cynthia Conlin's SLAPP suit silenced a number of Halbig's detractors; SHF refused to be silenced by their bullying and hired counsel.  More information on SLAPP can be found on the links below.

Here is a timeline and informational links:

May 2015:  SHF's post forshadowed what would happen if Halbig decided to bring Sandy Hook Facts into their SLAPP lawsuit. SHF, a California resident, would use California's anti-SLAPP laws to defeat Halbig and Cynthia Conlin's anti-free speech lawsuit.


Aug 2015: Wolfgang Halbig decided to ignore California law when he attempted to use a subpeona to drag Sandy Hook Facts into his ridiculous Florida lawsuit without justification.  Sandy Hook Facts and his skilled counsel prevailed and were awarded $22,495; far below what was owed.  Halbig, soundly defeated in California, soon had his his entire Florida SLAPP suit dismissed by the Court.

Halbig promptly appealed the California Decision. SHF cross appealed because the amount awarded was far below what was owed by Halbig.


Nov 2018:  Victory on appeal.    In a precedent setting published decision, SHF prevailed over Halbig on every point before the appeal court.  Halbig was completely defeated. The case was returned to the trial court to recalculate the amount owed.

You may view the published decision here:
In re Google:

You can search for the California case at the link below. No direct link is available.
Easiest Method: Case search for "Wolfgang Halbig"
Case number is: 2015-1-CV-280191


Presented by SandyHookFacts.com at 11:04 AM No comments: