Today was the FOIA hearing for Wolfgang Halbig vs State of Connecticut Deparment of Emergency Services and Public Protection
-- i.e the Connecticut State Police; the CSP.

Mert Melfa has published the hearing and you may watch it here:

The Commission kept control of Wilson and Halbig

Connecticut Attorney L. Kay Wilson, ever the unprofessional, came ready to go off on irrelevant tangents; however, it was not allowed. 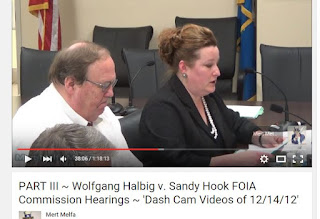 Kay Wilson wanted to discuss items unrelated to FOIA, such as Halbigs wild eyed ideas; thankfully, this hearing officer did not allow any Halbig/Wilson nonsense and kept them on task and discussing documents. This was Commissioner Streeter's major failure at the first hearing.    Any time Wilson wanted to steer the hearing into her hoaxer wonderland, the hearing officer, Attorney Victor Perpetua, stopped Wilson dead in her tracks.

The hearing was held timely and was not a two-day grandstanding and show boat session by Halbig and Wilson. There were no uncontrolled hoaxer outbursts screaming about Connecticut Mafia; no child-like temper tantrums by Halbig.  Halbig had one uncontrollable outburst and the hearing officer told him to control himself.
Well done to Hearing Officer Perpetua.

Dash Cams
As to the Dash Cams, CSP is claiming exemption as "evidence" and refers the Commission to the Altimari appeal pending before the Superior Court.  The Altimari appeal has been covered by this blog extensively.

When SHF FOI'd the exact same Dash Cams at issue here, Sinko and Seabrook were produced.  Newtown claimed exemption under Conn Gen Stat 1-210 (b)3(B) (Disclosing the identity of minor witnesses) for the Bahamonde and Chapman videos. Newtown, therefore, utilizes a much more solid legal reason for denying release of the two videos. 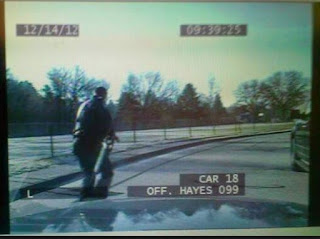 This above is a screenshot from Chapman's vehicle.  Most teachers and children exited the North East Corner door of the school and walked down that side walk area to the firehouse; therefore, many children would have walked right in front of this camera. Further, Chapman's audio captured that last final shots fired.  The written time lines in the report affirm both videos show exiting children.

While the CSP can choose to redact and release, FOIA laws does not require redactions; therefore, they cannot order CSP to redact the children.

I noted that in the hearing CSP Legal Affairs Officer Ms. Plourde made it a point to state that she had not reviewed the dash cams.  I think that holds the door open for a renewed appeal against releasing the documents based on 1-210(b)(3)(B) once she "reviews" the Dash Cam footage.

CSP will save that for another day, in my opinion. An ace in the hole that could be insurmountable by Halbig and his funds.

Court Appeal will be forthcoming
CSP made it fairly clear they are not going to release the Dash Cams pending court ruling.  The FOI Hearing Officer made it clear they were going to order them released, as they are obviously public records. Therefore, the stage is set for an appeal and court process.  That will be up to Halbig to undertake.

My bet, Kay Wilson will likely be very lazy here and that will cost Halbig.

It will be interesting to read the briefs to see what has been ruled in the past.  Intuitively, it seems police statements are public records; however, it's obvious the CSP is simply not going to willingly release information it thinks will harm the Newtown families.

That is really the unspoken bottom line, here.

My feeling is Halbig will prevail on most claims; however, CSP will not comply without a  long fight. This is Round 1 and CSP did not even play all their cards.  CSP has been down this road with the FOIA Commission many times.

The "document" side of me does not see much harm in releasing these particular documents; however, the empathetic side of me understands why Connecticut does not want to release the videos of their children to be spread throughout the internet and to hoaxer predators.  It's a real catch 22.

On the other side of the catch are Wolfgang's motives. His motives are greed, meanness, cold hard cash, and fundraisers.   Halbig has raised nearly $100,000 off of stunts like this. This just might be a spring board for more cash for his pockets.  For him, today was a win.

When L. Kay Wilson outlined her case for the Hearing Officer, she made no mention of anything having to do with Ms. Hicks.

Obviously, Ms. Hicks has no information that could be reasonably calculated to lead to relevant information as to documents in possession of CSP; therefore, the subpoena was frivolous.

It would be nice to see a complaint filed against L. Kay Wilson and to her see her sanctioned for her disgraceful abuse of process and harm caused to an innocent Newtown resident.

Presented by SandyHookFacts.com at 8:41 PM

Whoa...he's not looking all thst great...what's up with the lip twitch...

You booze you lose Wolfie.

Am I missing something here?...wasn't he already give a copy of the dash-cam videos? If he wasn't, any videos he receives with children are going to be redacted. Sooooooooo....what's he end game

We have the same videos... Sinko and Seabrook. Chapman and Bahamonde have never been released due to an exemption claimed by Newtown.

what a colossal waste of time and money and public resources.

i think a precedent needs to be set here. this is not about the FOIA. i understand the the courts are obliged to treat this case as they would any other FOIA request. that is the law - and that is how it should be.

but what we all understand is that this is about something much more important. it is about allowing predators and gang stalkers to turn national tragedies into for-profit harassment campaigns. this case is about enabling people with unscrupulous intentions to 'play' the system for the sole purposes of perpetuating a fraud and, in the process, heaping more misery on the family victims of high-profile violent crimes.

If this is allowed to continue - it will encourage and enable more predators to hide behind the 1st amendment as a way towards a means to profit.

on the other hand - if it can be demonstrated that society is ready, willing and able to rise to the occasion and CRUSH these miscreants - it may give pause to the next person who thinks they can simply use the internet as a weapon against victims of violent crimes - with impunity.

it is for THIS reason that i STILL cannot understand why the town of Newtown will not use the MILLIONS it received in donations to PROTECT its citizens - and take aggressive action against Jim Fetzer and Wolfgang Halbig. Sue them for defamation of character, slander, gang stalking, and every other charge they can muster up. FORCE these people to appear in court and train counsel and defend themselves. make it PAINFUL for them.

the idea that our tax dollars in Connecticut needs to go towards defending against frivolous FOIA cases - instead of benefiting the victims of their gang stalking - is outrageous. when is someone going to grow a brain and take the fight to them - on behalf of ALL victims nationwide?

I am going to agree that in no way would I as a parent. If my child was killed in a school shooting would want pictures of my child to ever be posted anywhere.
However, My question is why did they not release any photos of the shooter. The photos of the Columbine shooters as well as the areas where the victims were was avail .

The Columbine photos are available, but were not released by police. they were leaked to the enquirer 3 years after the shooting. correct facts are important. Likewise Ct law prevents release of Animals photo although I agree it should be...

...and another lie from Sandy Hook Hoax:

"Lt Vanghele - "I typed out my statement in my office and submitted it via a "thumb drive" to the CT State Police Crimes Division. I did NOT sign the witness statement that I submitted to them."