Newtown High School went on lockdown today due to reports of a sucidal man near the school.

According to reports: The man, 50-year-old Timothy Lockhart of Nashua, N.H., “was suicidal and threatening harm to others,” Ruszczyk said.

Sandy Hook Facts has been provided an *EXCLUSIVE PHOTO* of the standoff - you wont see this anywhere else folks!! 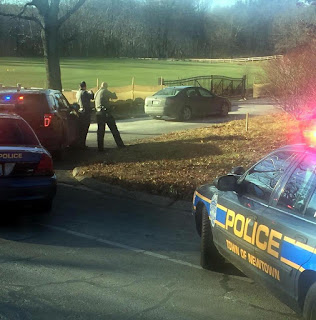 According to the Newstimes:

The Newtown High School was put in lockdown as a precaution,” said Ruszczyk. “After a lengthy standoff with police, the male was taken into custody with force.” The sergeant wrote that police charged Lockhart with breach of peace and released him to the custody of Danbury Hospital, “where he was held on 72-hour emergency commit.


More can be read:


Presented by SandyHookFacts.com at 9:00 PM

Email ThisBlogThis!Share to TwitterShare to FacebookShare to Pinterest
Labels: Newtown

this incident appears to be completely unrelated to the hoaxer situation (although it has not been 100% confirmed). But - i think it underscores how tragic this entire situation is that parents are forced to live in fear that some crazed hoaxer will show up at our schools and endanger the safety of our children. when i received word of the lockdown i was forced to call my wife who was forced to leave work early to rush to get our child in the elementary school. perhaps we overreacted - but this is the insane environment that the hoaxers are creating for a community still healing from PTSD from the original incident. this is the impact that Halbig and Tracy and Fetzer and Mead are having on an entire community. we have already endured bomb threats and hoaxers harassing family members - and death threats (as in the case of the recent calls to Mr Pozner).

all of these idiots to participate and spread this garbage are either directly or indirectly endangering an entire community - and they need to know that.