Mike Fl of Sandy Hook: Focus on Facts has done a great job putting together an comprehensive debunking a number of the claims regarding the Sandy Hook Massacre. This information is must read for those with questions, fair misconceptions, or if going toe to toe with hoaxer liars.

I wanted to post his work on my blog for reference and exposure.

June 23, 2014 at 11:03am
1. The claim of exactly 26 Christmas trees lined up beside the firehouse (Sandy Hook Volunteer Fire and Rescue) on December 14th.
2. The claim that News 12 Connecticut chopper footage shows people walking in circles/recycling around the firehouse.
3. Six children at the end of Gene Rosen's driveway.
4. The claim that Gene Rosen has worked for FEMA.
5. The claim that the shooter, AL, never existed.
6. The claim that Sandy Hook Elementary School was not an operational school/closed for an X amount of years/Wayback Machine doesn't show snapshots. 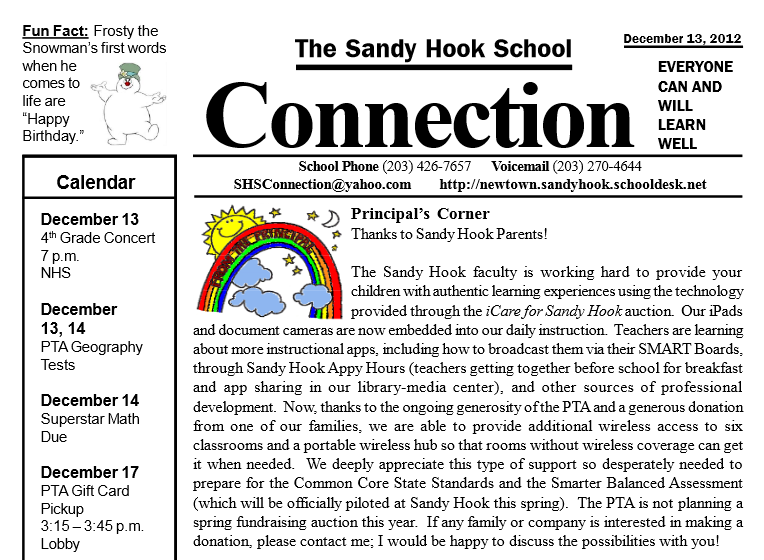 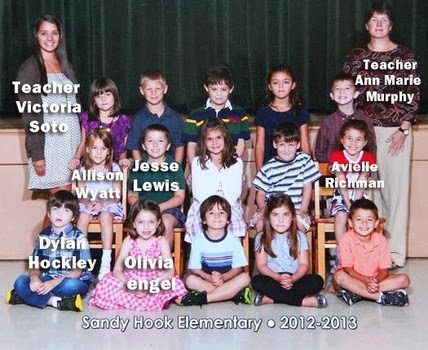 Wayback Machine
If you look up other schools, you will see the same type of results. Example:

This calendar view maps the number of times http://phoenix.edu was crawled by the Wayback Machine, not how many times the site was actually updated. More info in the FAQ." https://archive.org/about/faqs.php

7. The claim that there was information about the shooting before it occurred (such as Facebook pages, videos, blog posts, articles, Twitter feeds, Google search results).

At the time, Facebook stated: "You can't currently change the name of a Page with 200 or more likes."(Now Facebook allows you to request a name change, providing instructions on how to do so: http://www.facebook.com/help/271607792873806)

However, with less than 200 likes, the page name can be changed, which also automatically changes the name of the URL. You cannot change the date a Facebook page was created.

Note: Changing the date of when a page was founded (or born, started, opened, created, launched) does not change the date of when the page was actually created:
http://imgur.com/Y3sMFvI.jpg
http://imgur.com/Ngw0WHF.jpg
How do I change my name?: http://support.gofundme.com/knowledgebase/articles/98400-how-do-i-change-my-name-
Example...
https://twitter.com/StribJany/status/279612038798520321
Not signed in: 7:41 AM - 14 Dec 2012
Signed in with (GMT-05:00) Eastern Time (US and Canada) in account settings, which is Connecticut's time zone: 10:41 AM - 14 Dec 2012
If you google, Google Search showing wrong date, you will see people reporting about wrong dates showing up: https://www.google.com/search?q=google+search+results+inaccurate+dates#q=Google+Search+showing+wrong+date

There's one description that says: "May 14, 1980 - Mourners grieve at one of the makeshift memorials for victims of the Sandy Hook Elementary School shooting, Sunday, Dec. 16, 2012, in Newtown, Conn."  http://imgur.com/S3GuGJ7.png

8. The claim that Christopher Rodia/his car was at Sandy Hook Elementary School due to his name and license plate being heard on the recording of a police radio transmission.
9. The request for video footage at/inside Sandy Hook Elementary School.
10. The claim that Sandy Hook victims do not appear in the Social Security Death Index (SSDI).
Note: https://www.dobsearch.com/death-records lists all the victims, except Ana Grace Márquez-Greene. Same with http://search.ancestry.com/search/db.aspx?dbid=3693. I do not know why. Ancestry, however, does list Ana under United States Obituary Collection.

21. The claim that we were lied about when school evacuation times were, via the final report timeline, due to the dash camera recordings not matching up.

The information contained in this report is based on the documentation, audio, video, and statements, provided to us by Newtown Police Department in September of 2013." https://www.cpcanet.org/site/assets/files/1144/cpca_newtown_report_final.pdf

22. The claim that Lenny Pozner, father of victim Noah Pozner, was not at his son's funeral.
23. The claim that the money shown in a photo, from the final report, was found in Victoria Soto's classroom.
24. The claim that TransAct Technologies, where Benjamin Wyatt works at, is not a real business.

One Hamden Center: http://www.belfontiproperties.com/commercial_onehamden.php
2319 Whitney Ave, Suite 3B
Hamden, CT 06518
25. The claim that Steve DeMartino, who is on the mailing address for sending checks to donate for Allison Wyatt Memorial Fund and Fund For Allison's Sister, is the name of someone who has passed away before December 14, 2012.
26. The claim that two nuns are wearing identification badges, wearing 511 Tactical Shoes, and that one nun is carrying a gun under her coat.

27. The claim that a 2010 forum post, by kathaksung, predicted the Sandy Hook Elementary School shooting.
28. Sandy Hook appearing on the Gotham City map in The Dark Knight Rises movie.
My husband was always doing stuff like that if the movie permitted it and it received approval (directors, producers have the final say). I am sure the people in the film didn’t even know that Sandy Hook was a real place, just sounds cool for a film’s map." http://beforeitsnews.com/alternative/2014/04/fascinating-new-sandy-hook-twist-video-2943820.html

30. The claim that Lt. Paul Vance said that anyone who spreads misinformation about the Sandy Hook, December 14th shooting, will be prosecuted.
Lt. Vance is clearly referring to what is found to be state or federal law violations, as also noted in the official press release below.
31. The number of students who attended Sandy Hook Elementary School.
Two students probably left between the time frame of November 30th and December 13th, though getting that confirmed would be great.

While I am not sure what happened here. I would like to point out that most of your "debunking" facts are opinions and from the "official" story. You're really going to tell me that in all that chaos they only managed 3-5 STILL photos of kids being evacuated? This is the big thing for me. With all these kids in the school and all the cameras and flying helicopters they only managed to get a few questionable still photos....

Why would they bother to redact just the video part of the evacuation? then release still pictures of it? this is where the whole crux of the case comes down to. no reason whatsoever to redact the dash cam video. you are quick to give "debunked" on everything including that but offer no good reason as to why such video should be redacted?

"Why would they bother to redact just the video part of the evacuation? then release still pictures of it?"

gee, maybe because they weren't counting on people to believe everything they see and read on YOUTUBE! nor, did they think it would matter, nor did they think anyone would care if its a photo or a video. maybe because the pictures showed more then the video with close ups? its the media, they'll do what ever it takes to capture the moment.

....you've gotta be high. did you not scroll up and watch them flush every single one of those down the toilet?

Here's the unscrambled audio related to Christopher Rodia. He provided more detailed information than what would be ceded from a driver's license. The man was apparently reading from a computer screen. Notice how long it takes for him to find (9 seconds) his birthdate.

Nearly every link that you use on this page as "evidence" and debunking does not work? Gets errors? Does not exist?

@Leah Hobbs.....every single link I clicked on worked. Not sure why it isn't working for you. :(

Why anyone would want to take photos of the evacuation and depict it in a pretty manner? This was a tragedy not a photo op There are basic photos that were taken and that's it
Who in their right mind, unless being a reporter would take pictures in such a heartbreaking incident? where does your appetite end? at 5, 10, 20, 100 photos?

Conspiracytards needs to grow up. Their thirst for this kind of nonsense is down to their paranoia and lack of intelligence

Conspiracytards need to grow up. Their thirst for this kind of nonsense is down to their paranoia and lack of intelligence

clasic conspiritards, claiming that the media made fake evidence even though they themselves make fake evidence... lol. they need to get help with their paranoid delusions. the government isnt coming for you...