"For almost two years James Tracy has been shilling for dollars on his popular website.. but is he licensed in Florida to do so?" -- CW Wade
It appears James Tracy thinks he is not only above the  Collective Bargaining Agreement (CBA) with Flordia Atlantic University, but above Florida State Law.

The Letter of Termination from Florida Atlantic University states that Tracy refused to submit an "Activity Form" required pursuant to his CBA and University Policy; failing to do so for 2013-2014, 2014-15, and 2015-16.

According to the University, rather than simply complying with his CBA and submitting the form, Tracy waited until Nov. 22 (about 288 hours) and than emailed his boss explaining why he felt he did not need to comply.

Since James Tracy is a wild-eyed rabidly paranoid hoaxer conspiracy theorist, one can only imagine what Tracy's letter to the dean stated: "blah blah independent media", "freedom of speech", "government oppression" "FEMA Camp", "You're not taking my guns", "Obama!!!!".

It is difficult to imagine how Tracy could justify not formally disclosing his blog for a "conflict evaluation" considering that Tracy's blog makes FAU and James Tracy an international laughing stock.

Unlike SandyHookFacts.com, where SHF does not solicit donations nor receive any remuneration whatsoever, Tracy solicits funds via his website for his cause.

It is unclear if Tracy admitted to Florida Atlantic University's Dean that he operates Memory Hole Blog as a fundraising entity; however, more concerning, Tracy's fundraising venture may be in violation of Florida Law.

Prominently displayed on Tracy's MemoryHoleBlog is a "Donate" Button.  For example, when 'tough-guy Tracy' decided he was going to bully and cyber-terrorize a 9 year old girl by publishing an article attacking the little girl and her family, Tracy did so to raise money.  Here is is a screen shot of the Donate Button prominently displayed on the "attack and bully a little girl" article. 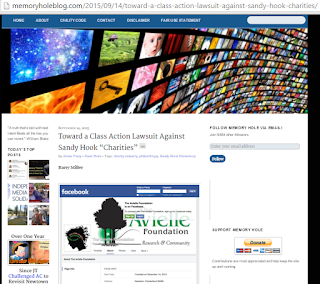 The 'Donation Cause'  Tracy listed when he created his button was to "keep the site up and running"; therefore the donation purpose is specifically for  "Memory Hole Blog".

Tracy ensures the Fundraising Button is on every page of his blog.    When you click on the button, the cause you are donating to is listed as "Memory Hole" and "Memory Hole Independent Research Fund", a very valiant sounding charitable cause and organizational purpose:

Paypal is very clear about the terms of using the Donate Button. When you use the "Donate button" you are agreeing that you are "Fundraising for a Cause".  You cannot escape the language of the term of use; it is even prominently displayed on the "create button page" itself.

Tracy is obviously knowingly operating a "Fundraiser for Cause" from his website; at a minimum, he reasonably should know.

Florida Statute 496.404
(1) “Charitable organization” means a person who is or holds herself or himself out to be established for any benevolent, educational, philanthropic, humane, scientific, artistic, patriotic, social welfare or advocacy, public health, environmental conservation, civic, or other eleemosynary purpose, or a person who in any manner employs a charitable appeal as the basis for any solicitation or an appeal that suggests that there is a charitable purpose to any solicitation.

Florida law is very clear. All fundraising organizations must register with the Florida Department of Consumer Services PRIOR to soliciting donations.  A "Fundraiser for cause" seems to specifically meet these requirements and therefore Tracy must register.

Accordingly, failure to comply with Florida charitable organization laws could be a felony:

496.417 Criminal penalties  Except as otherwise provided in ss. 496.401-496.424, and in addition to any administrative or civil penalties, any person who willfully and knowingly violates [this act] commits a felony of the third degree, punishable as provided...

Despite the fact that MemoryHoleBlog appears to bill itself, on behalf of James Tracy, as having a charitable fundraising purpose for "Independent Research",  SHF's independent research found that Tracy does not have a business name registered for MemoryHoleBlog (or any similar name) and therefore may be illegal for many reasons.  Tracy does not appear to have any business registered at all.  http://www.sunbiz.org/ficiown.html 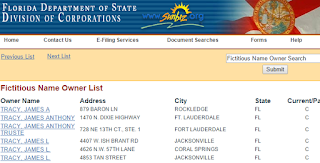 SHF checked every "James Tracy" on that list and none were from Boca Raton and none indicted "MemoryHoleBlog" or other similar type business name or purpose.

Further, I checked with Florida Records to see if Tracy was registered to operate a charitable fundraising organization, in compliance with Florida law.  I tried multiple combinations and variations of "MemoryHoleBlog" and none could be found.
https://csapp.800helpfla.com/cspublicapp/businesssearch/businesssearch.aspx

It is unclear when Tracy began his Fundraising activities; however, they were in place as early as March 2014 according to the official Web Archive.  Since at least early 2014, Tracy appears to have continuously shilled web articles for donor money to support his "Independent Research".

This archive from September 15, 2015, as Tracy was apparently ignoring his reprimand and as his website bullied a little girl:
https://web.archive.org/web/20150915035339/http://memoryholeblog.com/

For almost two years, Web Archive documents James Tracy's conspiracy minded charitable fundraising shillary.  It appears that James Tracy has as much as issue complying with his own CBA as he may have with complying with Florida State law.

Presented by SandyHookFacts.com at 8:38 AM

isn't there ANYONE in this man's life who can organize an intervention? he's married with a baby. isn't there ANY family or extended network of friends that can intervene here to get this guy some psychiatric assistance?