Sandy Hook Justice is releasing piece-meal snippets of court documents related to the Jonathan Reich case as part of "HartfordCommunityCourt.com".

Let's break down the snippets of information.  We'll start with this one, the first one on his page:

It's very common to correct court documents; he will get no where with this claim. I think it is more of a money making gimmick. If SHJ can trick a few people into thinking that means something, and they donate, then it's worth saying.

Much more interesting was this bit of information: 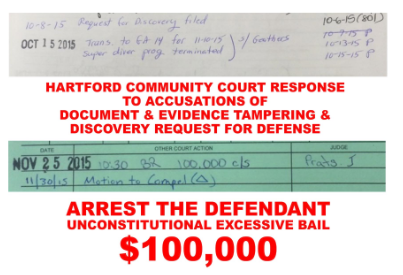 "Hartford Community Court" did not order the arrest of Jonathan Reich.  Hartford Superior Court GA 14 - Judge S. Prats did. Reich was transferred OUT of Community Court on Oct 15. 2015, according to the document he, himself provided.  Warrant ordered Nov. 25, 2015 by Judge Prat.

A look at CT Judicial Website confirms, Reich is at Superior Court- GA14 for further proceedings:

This confirms what I wrote in previous post; Reich's assignment to Community Court was part of the sweet heart deal his father's high priced attorney's worked out. After exhaustive research, I found NO OTHER harassment cases assigned to Community Court.  Reich was getting a very special deal, and he's blown that deal, along with the $50k is dad spent working that deal out. 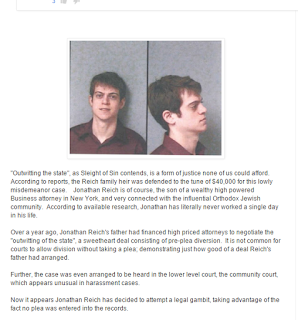 Now that Reich has blown the sweet heart deal his father purchased, Reich will very likely be doing hard time from Superior Court.  This also explains his very high bail.  The court is obviously tiring of his games such as failing to appear in court and frivolous requests for an unredacted copy of the final report, not to mention whimpering ad naseum about his case instead of complying with his agreement.

This also could explain why Reich failed to appear; he's running scared from Superior Court and near inevitable jail time. According to a well placed source, chances are that when Reich appears, he will be remanded to the custody of Corrections.

9/24/16 UPDATE and RETRACTION:  DETAILS OF THIS ARTICLE CHANGED DUE TO THE CONFIRMATION THAT ZEEROE3 WAS IMPERSONATING JONATHAN REICH DURING THIS TIME PERIOD.
It is unfortunate that ZeeRoe3 made a "game" of the Jonathan Reich case.
http://sandyhookanalysis.blogspot.com/2016/09/new-york-sandy-hook-hoaxer-threatened.html

what a jackass this kid is