Lake County, Florida
In the Sandy Hook lawsuit Lenny Pozner  vs Wolfgang Halbig, Halbig committed a major blunder when he amateurishly attempted to demurer to Lenny Pozner's complaint well after the case is ongoing.

Case in the discovery phase
Wolfgang Halbig answered Lenny Pozner's complaint in October 2015.  Since then, the case has progressed and is in fact in the discovery phase.   Despite the ongoing discovery, Halbig now comes to the court hoping for a dismissal for "Failure to State a Claim" for relief.  The time for that filing is long past!   If there was no claim, he should have brought that up in his answer.  Now he has waived that potential defense.

Oddly enough, Halbig cites the exact Florida law he should have read before causing Lenny Pozner to incur yet more legal expenses to fend off Halbig's frivolous filing. Had Halbig read the law he cited, he would know that he has already waived the defense when he answered the lawsuit on 10/15/15.


That makes  Wolfgang Halbig's hoaxer filing frivolous.  Lenny Pozner's attorney wasted no time pointing  this out.    The frivolous court filing cost Lenny Pozner attorney fees and the court will likely award those fees to Pozner as a sanction.  Why would Halbig frivolously cause harm to a Sandy Hook parent?  That question is for the reader to answer. 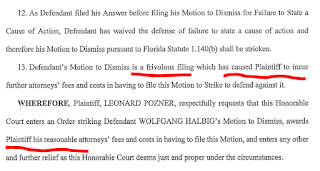 Halbig will not answer a few simple questions

The lawsuit has been ongoing since September 11, 2015, yet Halbig has refuses to cooperate with the legal process and answer discovery demands.

Lenny Pozner filed a Motion to Compel Wolfgang Halbig to comply with the discovery process.  As part of Halbig's frivolous "Motion to Dismiss", Halbig weakly claimed he has not received the discovery request.

Of course, Halbig was personally served the discovery on 9-24-15 at his home, as proven by the proof of service performed and signed bya professional process server: 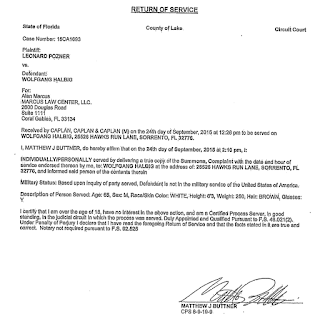 Halbig's dirty tricks may play well to his wide eyed conspiracy theory followers during Halbig's donation drives, but it is not likely to amuse the court.

$100,000 in Donations Missing
According to the NY Mag profiling hoaxer Wolfgang Halbig, he has raised  $100,000 for his Sandy Hook Justice fund. Despite that fat wallet, Halbig has decided to wage the legal battle against the Sandy Hook parent without the aid of his attorney.  Where has that money gone? Halbig has not provided the public a full accounting of the $100,000 donations.

Wolfgang Halbig, in the past, has utilized the services of Cynthia Conlin, of Orlando and fellow hoaxer, Kay Wilson.  Neither of those attorneys have made an appearance to assist in the legal battle.

The rank amateur filing is yet another display of Halbig's incompetence in the legal field, so why can't he afford an attorney?

Halbig, show us the money!
Halbig's failure to produce any Freedom of Information Act material or a full accounting of the funds is causing followers of the Sandy Hook Hoaxer saga to wonder, where are the documents?

Halbig has been very unproductive in his FOIA requests; quite frankly, he has not produced any quantifiable results!   So where has the $100,000 dollars gone?  Even if $50,000 was spent on Halbig's fruitless FOIA requests, where is the other $50,000 K?

Any documents Halbig has received via FOIA, he hides from his donors!  Halbig refuses to release his FOIA documents, likely because they disprove his radical conspiracy theories.  According to New York Magazine Halbig "ignores countervailing arguments and exaggerates both the evidence for his theories and his credentials".

Halbig, thus far, is specifically refusing to release the work orders from Sandy Hook Elementary School to his followers. Halbig received hundreds of these documents from Newtown as they dutifully complied with Halbig's requests.

Self styled Sandy Hook Hoax sleuths are demanding he release the documents he obtained with donor money.  One has to wonder, just what is Wolfgang hiding?  Why can't he answer these simple questions?  Youtube User JFK371 posted this video, begging Halbig to "pretty please" release the documents. Thus far, Halbig refuses the simple, fair request.


This parody of the NY Mag article, posted by an anonymous user, has surfaced bringing a little humor to the otherwise horrific subject.

While this response reminds us what it's all about: 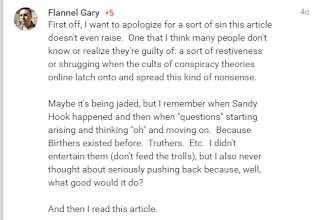 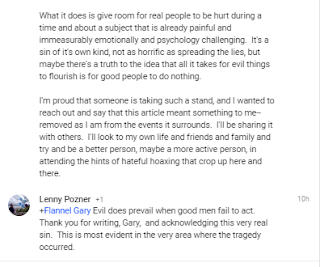 Presented by SandyHookFacts.com at 2:59 PM

He'll die a painful cancer death along with Tony Mead.

"Failure to state the content or name of website" is actually a fatal flaw in this suit.

An amateur mistake worthy of Halbig himself.

If you file a lawsuit claiming defamation without stating what those remarks were and where they were found, no judge is going to read beyond that point.

Its not a defamation lawsuit.. .. just fyi

I'm thinking, if Wolfturd really wants to raise money, he could become a spokesman for Depends...after all, he has shitforbrains.

Wolfgang Halbig still thinks he can handle the lawsuit like one of his FOI hearing, where people had to give him what he demands. But this time is different, he is digging himself deeper, until he runs out of funds.