New York Sandy Hook Hoaxer Threatened Newtown Teacher Jason Adams
“We brought all the information to the authorities, but the police never filed a report.”
-Colleague of Jason Adams on the suspected hoaxer

There is a bombshell development in the Sandy Hook Hoaxer terrorism saga, as reported by main stream press. 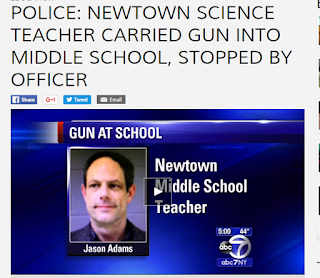 Details are now emerging about Newtown Middle School teacher Jason Adams. He was arrested for carrying a loaded handgun in the school where he worked.
https://www.washingtonpost.com/news/morning-mix/wp/2016/09/23/newtown-teacher-says-he-brought-gun-to-school-because-he-feared-sandy-hook-truthers

Adams plead guilty and was sentenced to a diversionary alternative sentencing program. If he complies with his sentence, his case will be ultimately dismissed.

Note: You can read about this type of sentencing with the case of Jonathan Reich.  That is interesting considering developments below.

At sentencing Adams explained that he had been threatened and harassed by Sandy Hook Hoaxers.  The judge appeared empathetic to his plight and justice appears served.

In one message, the man told them to leave their home, she said. And in another, the man sent a picture of Geri Adams reading to a kindergarten class, along with the words, “Have fun reading to the dead children.”

“We did a background check and discovered the identity of the man,” she told the News-Times. “We brought all the information to the authorities, but the police never filed a report.”


Maxwell, Adams’s attorney, said Adams would keep the gun locked in his car during work. But on the day of his arrest, he was rushing to a staff meeting and he inadvertently brought it with him, he said.


"I'd move if I were you, you don't want me anywhere near your town, I'm bad for people's health.
"It was serious, because the gentleman was in close proximity to New York's border," said Gina Caallaro, a former colleague.

The news did not in identify the suspect who threatened Jason Adams and his family, nor have they taken any action to investigate or stop the threats.

Immediately, there was buzz in the alternative media world that the suspect discussed was Jonathan Reich.   At this time, Sandy Hook Facts does not support this link as there is no real evidence linking the two.

Information Wanted
If you have any information on the harassment suffered by Jason Adams or the suspect, please email:


Final thought
We really have no idea who contacted the residents of Newtown,including their children, harassing and stalking them.  It is past time for the "Youtube" conjecture to stop and the police to get busy uncovering the stalkers identities, making arrests, and start the prosecutions.

When is enough, enough?

Presented by SandyHookFacts.com at 9:18 PM

These "twoofers" are not about truth on any level or topic. All they want is, someone to believe their position is factually correct...so, they lie, manipulate and twist the story, the identities and the logic to achieve their goals. EVERY SINGLE ONE OF THEM, ARE COWARDS.

ZeeRo3 is a spine-less pussy who WILL get his ass kicked one of these days.

so - this teacher lost his job - his life was ruined - because of these sandy hook hoaxers threatening him? he felt compelled to carry a gun because of their death threats?

yeah after my wife and kid survived being a sandy hook school. and I'm quite trained. ie state of ct handed my permit back. and my life wasnt ruined..... not because of anyting that newtown ever did for me...lo