Pete Santilli stays in jail for the weekend

Pete Santilli and the Malheur militants appeared in Federal Court on Monday for a detention hearing.

The government called Pete Santilli a 'danger to the community and a flight risk with a professed unwillingness to abide by any authority...' The prosecution once again used Pete Santilli Show words against him when he professed that all his guns were buried, he's not going to be at the mercy of the system."

That's the understatement of the year. 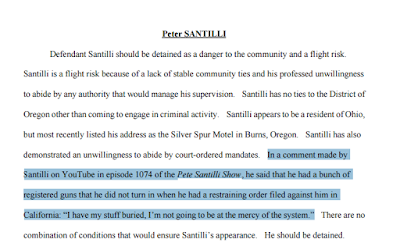 Pete Santilli was remanded without bail for the weekend while the judge reviews the case against him. The judge may make a decision on bail/release on Monday.   Let's hope she determines he stays in jail.

A memorandum in support of release was filed by Santilli's government paid defense attorney; however, I doubt it is worth the $.10 per page it would cost me to download it from Fed Court records. 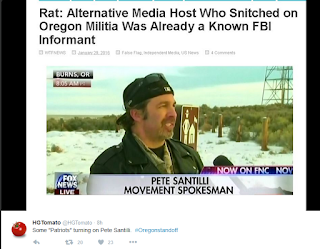 As to the non-hoaxer militants, release was denied for Ammon Bundy, Ryan Bundy, Ryan Payne, Jason Patrick, and Dylan Anderson.  Josephy O'Shaughnessy and Shawna Cox were released with ankle monitoring and GPC.  O'Shaughnessy's release was appealed by the government.  Brian Cavalier and Duane Ehmer will be reviewed on Thursday. 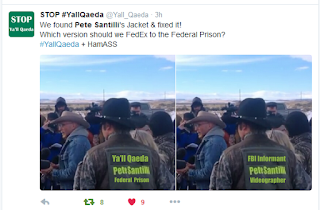 Meanwhile at the FBI, the 4 Refuge holdouts offered the FBI:

Let us leave with our guns, no checkpoints, and amnesty.


The delusion is strong in Bundy Followers.

*Update*   View these recent videso on Pete "the Shill" Santilli:

The "arrest" of Pete Santilli in hi-def

Presented by SandyHookFacts.com at 10:04 PM

Santilli is just too stupid for his own good. His false bravado as he hides behind his "Press" vest and threat of buried weapons will be his undoing in court.

This what happens when a stupid person believes their own stupidity.

I feel sorry for the people who had to watch that show of his on you tube in order to find the quotes.

"A significant amount of the FBI’s information used to charge Ammon Bundy came from an activist named Pete Santilli, who was living inside the refuge and broadcasting live his conversations with fellow activists.

To demonstrate a conspiracy, the government has a lower burden than it would with similar charges, such as aiding and abetting, or solicitation. A conspiracy charge in federal court does not require the underlying offense to have taken place, so prosecutors can charge the defendants based on their statements, without proving they actually committed a crime.

That is where Santilli’s broadcasts proved so useful to the FBI.

“We’re continuing the stand at the Malheur National Wildlife Reserve,” Ammon Bundy told Santilli in a conversation on Jan. 2, the day the occupation began. “Let everybody know that.”