The business of Jim Fetzer and Professor James Tracy, Professor at Florida Atlantic University, is to profit off of peddling bold faced lies and debunked trash, with the intent to to victimize victims of violent crimes resulting in the fueling of predatory online stalking of devastated innocent victims, including little girls, and as they rake in the profits off their new book, business is good.

With the publishing of their widely popular book,  "Nobody died at Sandy Hook" Fetzer and Tracy just upped the ante by directly creating a compilation of lies and selling them. 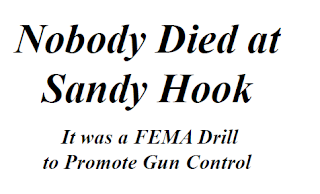 The premise itself is idiotic.  A FEMA Drill to promote gun control, really? That doesn't even make sense.

These are the same type of people who claim lizard people head up diabolical scheme, the earth is flat, and Russia and China are "in on it" with America, because no one has ever been to space.  Everything is a hoax! To take their guns.

Ironically, the hoaxer lunatics probably should not be anywhere near firearms.

The audience, the hoaxers, are Alex Jones drones that believe every word, without question, as they clutch their AK47's in their dark, dank basements, eating Meals Ready to Eat.  "They are the resistance", they tell themselves, echoing the mantra of their hero, Alex Jones.  Mesmerized cult like sheep without critical thought process.

For example, here, they claim "both Vehicles including the VW are facing the school. 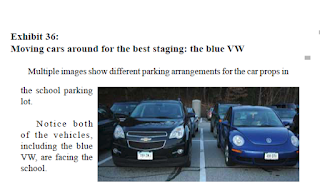 Then Fetzer and Tracy claim the VW is facing away from the school.   Proof of Hoax! But is it?

The lie is that the blue vehicle next to the van is the VW. 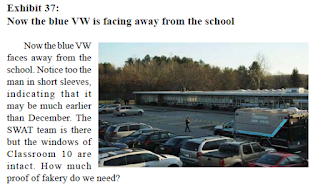 *Gasp* shocked tin foil hatters say to themselves, as they run off to stalk a woman or a child, falling for Fetzer and Tracy's side show  gimmick. 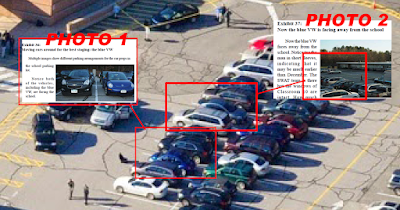 Photo trickery and bold faced lies, thus
Sandy Hook Hoax is created, And with that, thry have hoaxed you.
These ultimate hoaxers, gimmick after gimmick peddled, and boxed and sold
to internet conspiracy theorists.


Because of Fetzer and Tracy among a few others, The Sandy Hook Hoaxers are on the attack. We can thank those that profit off this tragedy for the mass marketing hoaxer campaign that has resulted in these attacks on victims. 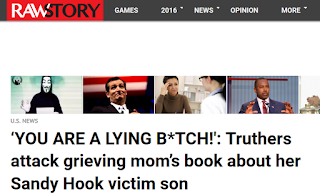 Some of the most stalked children on the internet can thank Fetzer, Tracy, and Halbig for their daily blather and bull crap; peddling the claim that the six year olds who were killed at Sandy Hook are actually these much older Sandy Hook School Super Bowl singers.

Thanks to Tracy and Fetzer, dozens of Youtube videos and blogs openly lead gangstalking against these little children.


I have reviewed the book by Jim Fetzer and James Tracy and I am literally appalled at the number of lies in that book. It is literally literary filth. The problem with this literary filth is that also serves to incite the online stalking of family by internet trolls stupid enough to fall for the lies.

There is not a single piece of evidence of hoax in the entire book. Literally, not one real fact that would lead a reasonable person to even consider hoax. Not one.

And the tragedy is that Amazon.com profits off of these James Tracy and Jim Fetzer's lies.

Another use full gimmick, more lies:


Child victim profiteers James Tracy and Jim Fetzer have assembled a compilation of blog post and ramblings from paranoid, dangerous, internet gangstalking crackpots; the troglodytes from the darkest corner of the internet.  The Hoaxer. To call these animals "Truthers" would be to degrade every decent tin foil hat conspiracy theorists hoaxers.

And what gets these hoaxers fired up to where they stalk these people every day?

Lies.  Like this. This offering from Jim Fetzer and James Tracy's books and blogs.  The place where they literally spew vile lies on a daily basis, even after sound debunking. 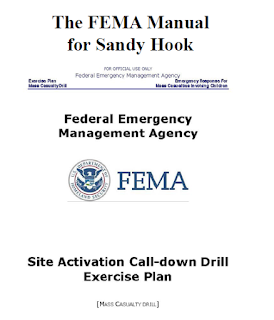 Sandy Hook Hoax Group members, led by Tony Mead, literally created this manual using an online template and published to their follows and throughout the hoaxer world. 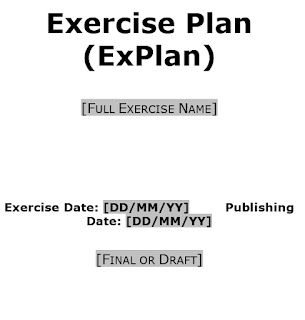 This is why it has NEVER been located on a Government Server or authenticated in any manner.
https://www.metabunk.org/debunked-sandy-hook-fema-drill-pdf.t4656/

In fact, you can create your own for your family BBQ or anything else right here:
http://www.mass.gov/eohhs/docs/dph/...l-site-activation-call-down-exercise-plan.doc


Lies upon lies to create a army of online predators and stalkers, all for their own profit.

Such as this lie, Fetzer and Tracy claim the report makes no mention of any doors at the rear being "involved in the incident", yet there are images of broken glass in the report. 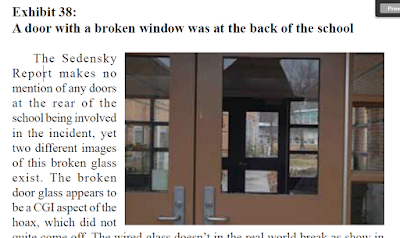 "Ah ha! Hoax for sure!" exclaim hoaxers and they google up a elementary school they can call up and threaten.

Of course, Fetzer and Halbig are lying, again.  The report discusses these doors in several locations and even names the officers who breached, and described the doors and broken window in great detail.

One such location is document 29745, where Officer Seabrook describes breaking out the window to gain access to the school in the first minutes after the shooting.

Lie after lie, and I could go on and on, but that is for another day. An endless supply of lies easily debunked.. but for today, I'm publishing this. The word needs to get out.  The stalking needs to stop and the hoax leaders need to be stopped.

Because who pays for their profiteering off of lies? Victims and little kids.

Please share and re-share Thomas Bittman's post. Let's put some pressure on Amazon to stop profiting of the likes of Fetzer and Tracy.


Amazon.com is profiting from selling conspiracy books that abuse victims of violence in Sandy Hook, Umpqua, etc. Please tweet and reweet, and share on Facebook. We need this to stop. #noprofitfromabuse

Reshared with permission of Thomas Bittman.

Presented by SandyHookFacts.com at 9:09 PM

Sadly, the followers of these dishonest Hoax hypothesis leaders believe they are part of a noble, righteous cause..." the ends justifies the means" mentality. This insulates them from having to produce real evidence, fact check their claims or worse, refrain from causing the families more pain and suffering.