As the graphic details, photos, videos, and stories continue to emerge on the tragic terrorist attack  in Paris, France, the Hoaxers continue to declare the entire shooting "a hoax".

A quick look at a few of the more absurd "Paris Conspiracy Theories":

Wolfgang Halbig, leader of the Sandy Hook Hoaxers, has decided that Paris is all about Sandy Hook and the ubiquitous "they" the perpetrators.  It stands to reason then, that Paris would incorporate nicely into his fundraising efforts.

"Paris is in play to take your eyes of the Sandy Hook Elementary School Conspiracy because they know that if Sandy Hook gets exposed so will all of the other planned Government Conspiracies designed to intentionally Inflict Emotional Distress on millions and millions of Americans."

Of course he finishes with thoughts on 9-11 absurdity. Frankly, I'm surprised he didn't throw in the "earth is flat", "boston bombing is a hoax" and we "never walked on the moon" as part of his conspiracy theorist salad: 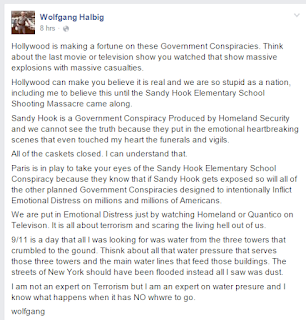 Russian Vids, a hoaxer with thousands of subscribers, made this, essentially mocking a horrific scene.  These women are obviously hanging on for their lives.  This is hoaxer idiocy at some of it's worst:


Peekay22, well known as one of the most deranged mentally stalking hoaxers there is, had this offering:

This is the propaganda being pushed by Hoaxers.  Obvious disinformation on a rampant scale combined with monetized videos and fund raising.

Who pays the price? 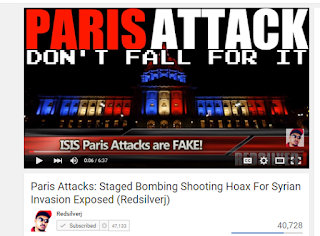 Presented by SandyHookFacts.com at 9:39 PM

Email ThisBlogThis!Share to TwitterShare to FacebookShare to Pinterest
Labels: Other Mass Shootings