You would think Wolfgang's public attacks on the Lake County Sheriff's Department would bother them; you would be wrong!  But why? That is the real mystery. Why is the new Lake County Sheriff afraid of and protecting Wolfgang Halbig?

The history of Wolfgang Halbig versus Lake County Sheriff just took a surreal turn as Wolfgang Halbig has apprently come under the protective wing of the new Sheriff of Lake County, Peyton Grinnell.  Grinnell is the newly elected sheriff and it appears his policy is to welcome Halbig with open arms and protect him. 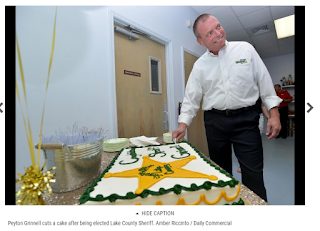 Wolfgang files Federal Complaint
Wolfgang Halbig filed a Federal Civil Rights complaint because the Sheriff's Department appears to have had him listed as a "Mental Patient".  However, that was before Sheriff Grinnell donned the big badge! 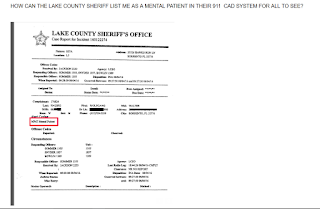 Wolfgang is a Orlando Pulse Hoaxer, too!
Wolfgang Halbig slapped Lake County and Orange County, and all of Florida Law Enforcement in the face when he declared Orlando Pulse Shooting to be fake/hoax/illusion, in numerous emails and interviews.  Wolfgang Halbig's very own attorney, Cynthia Conlin, apparently quit over the connection to Pulse Hoaxerism; yet Sheriff Grinnell is protecting Wolfgang? Very strange! 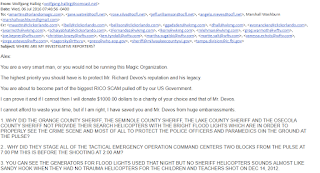 You would think declaring Orlando Pulse a hoax would bother Peyton Grinnell, but stay tuned, you would be very wrong!  Petyon Grinnell might as well snuggle up to Wolfgang and cuddle!  Perhaps Peyton Grinnell could give Wolfgang a foot rub when he's not protecting him.

Public Shaming of Lake County Sheriff
Peyton Grinnell must love it when his staff are shamed by Wolfgang Halbig.  Here, Wolfgang sticking it to Petyon Grinnell directly and, of course, Wolfgang CC'd the world.

Did Peyton coo when Wolf sent that out?

Lake County Sheriff Lt. Dan Conlee gets punked by Halbig
Wolfgang Halbig ran Lake County Lieutenant Dan Conlee around like a keystone cop when Wolfgang apparently pretended that the rubber duck was GIVEN to Wolfgang LIVE ON INFOWARS by fake news reporter Dan Bidondi was actually placed on his "door step" of his "gated community" by some secret duck stalker  (or was it some other magical duck at the same time? I can never keep Wolfgang's stories straight).  It would seem whatever the story was, Conlee ate it up  hook, line, and sinker and laughably went digging around in the vehicle logs at the gate looking for suspects!  The ducks had been placed on Dan Bidondi's car in Connecticut; yet Conlee just couldn't see through Halbig's story.    Obviously, "sleuth" Dan Conlee found nothing.  Apparently, the story goes, this secret person snuck into the gated compound delivering the same exact type of duck he has received on air on Sept. 30, 2015. 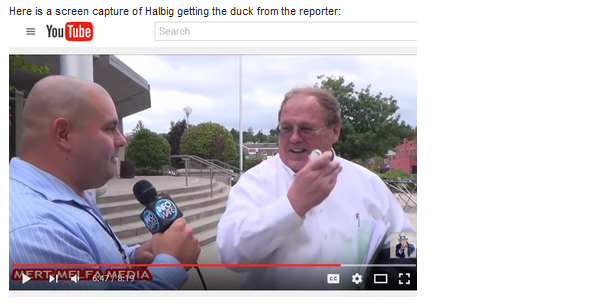 And here is Lake County Investigator Dan Conlee actually digging around the vehicle logs while Wolfgang laughs at him: 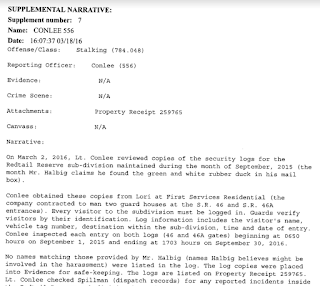 Conlee Seached Sept 1 through Sept 30 in the vehicle logs; even though it is almost impossible Halbig was in Florida and Connecticut at the same time receiving ducks.  We do have video of one of them, and Halbig was in Connecticut.  Logic.

And yes, I even emailed Dan Conlee and told him what Halbig was up to. Did Conlee care he was being punked? Not one bit, apparently! Did he even attempt to investigate what he was told by me? Not according to public records!

Perhaps Dan Conlee was weakened from Wolfgang's very public slaps, like this:

Now he is Halbig's little pet.

Wolfgang made it clear he thought the Sheriff  was a coward; sending that exact statement to numerous organizations all over the country.

Note: While not relevant to this article, here Halbig used what appears to be an South African originating email address of a person alleging themselves to be a "Midwest LEO and SWAT" as a reference. Very Curious!  Well at least this reference was living.  Halbig often uses dead people as references!

Lying to the judge
Wolfgang dared to stand in front of Florida Senior Judge Sandy Champ and complain Lenny was e "flooding him with emails".  A bold faced lie!

The exact opposite is true.  Wolfgang emails Lenny Pozner harassing, idiotic, hoaxer nonsense nearly every day and some days,  more than once.   As a matter of fact, since having the nerve (and dishonesty) of complaining to the Judge on May 24, Wolfgang has emailed Lenny at least 25 times!

I have screen capped portions of several below.

But what does this have to do with Sheriff Peyton Grinnell?

Lenny has understandably responded harshly to Wolfgang's nonstop idiotic emails.  Who wouldn't?
I have lost my cool and responded to Wolfgang, myself!

How can you not?

Did the Lake County Sheriff's action take action to protect the public from Wolfgang?
No!

Sheriff Peyton Grinnell, bending over backwards to protect Halbig, has apparently ordered me blocked from the entirety of Lake County Sheriff Servers.

I cannot email any LCSO.org email address at all!

So the question is this...
If Lake County Sheriff Peyton Grinnell and/or his deputies are allegedly doing all of these horrible things to Wolfgang, Wolfgang can shame them publiclly, yet Wolfgang can freely email them, as he did to Lake County Deputy Michael Marden on 6/29/17 (yesterday) 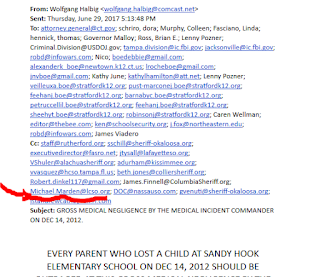 Yet, I cannot email that Deputy:

All while Wolfgang Halbig calls him a coward to his face and can email them freely.

That is a very strange thing, indeed.

Here are partial screenshots of emails sent by Wolfgang Halbig to Lenny Pozner.  These are just to show the sheer quantity of harassing emails that gets sent to the Sandy Hook parent. Why would Sheriff Grinnell have no interest in Wolfgang's activities?

Why wouldn't Sheriff Grinnell want to know that a resident of Lake County is continually emailing hoaxer nonsense to Sandy Hook families?

Feel free to email Peyton.Grinnell@lcso.org or Dan.Conlee@lcso.org and give them your two cents!

The cover up and fear of Halbig by police agencies needs to end. 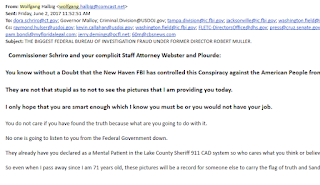 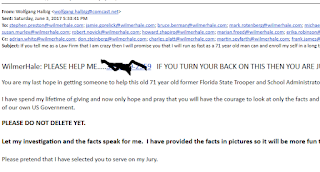 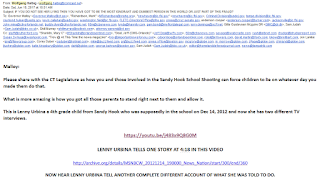 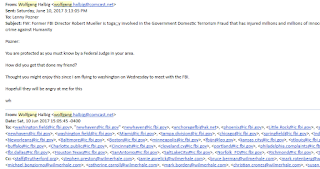 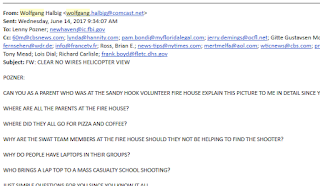 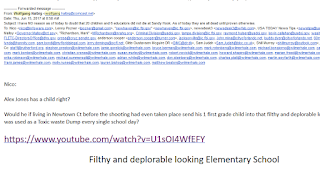 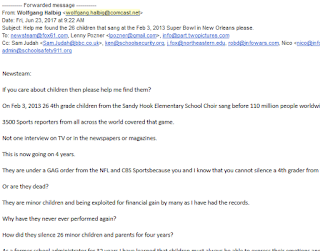 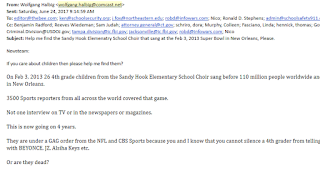 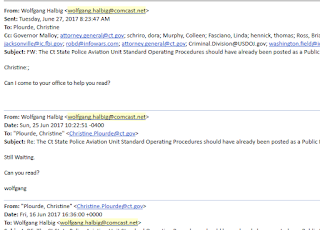 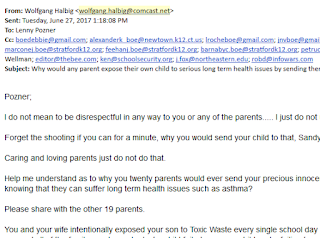 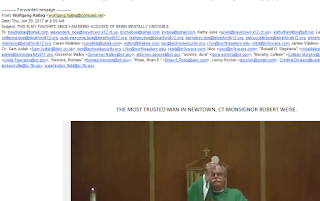 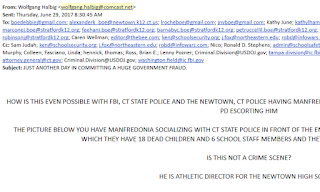 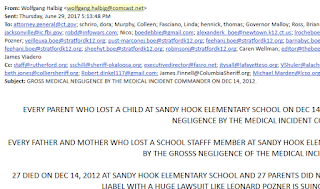 there's a good chance they get flooded with hoaxer nonsense and they may have decided the best way to deal with it is ignoring it (a legitimate tact). That said, a bet a small town local paper starved for stories might just publish about this well known hoaxer (especially given that he's added Pulse to his resume), his activities, and the new Sheriff's relationship with him. Just saying

This is absolutely appalling given Halbig's history and his harassment of so many people, particularly the victim families. What does he have on Peyton Grinnell? Are they somehow related? Thanks dear CW for your great research and dedication!

Wolfturd is off his rails. Nothing of what he says or thinks is rooted in reality. It IS a good think, he only spend one year as a state trooper, he's a moron!