A hearing has been set for November 7,  2017 to hear several motions in the case of Sandy Hook parent Lenny Pozner versus conspiracy theorist leader Wolfgang Halbig. 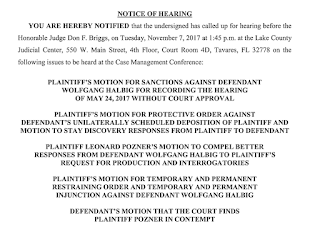 Sandy Hook Hoaxers are well known for their harassment of innocent victims.  Those hoaxers affiliated with Wolfgang Halbig and Tony Mead's Sandy Hook Hoax Group are particularly vicious and disgusting.

Sandy Hook Hoax Group member  Jonathan Reich had his fair day in court and was convicted for harassing the mother of a Sandy Hook child.  He was separately convicted of harassing Wayne Carver.  The hoaxers recently published the phone calls that were used to support the Wayne Carver conviction.  It's no wonder Reich plead guilty rather than allow a jury to hear his harassing calls.

Is Wolfgang Halbig next to face the criminal justice system?

Wolfgang continues to hide from Discovery
Despite numerous clearly worded court orders, Wolfgang Halbig continues to refuse to answer discovery interrogatories with real response.  What is Halbig so afraid of?   The truth?  Halbig had until August 1, 2016

The motion cites a few examples of Halbig's refusal to answer even the most mundane questions, such as "Who controls SandyHookJusticeReport.com" and "Do you have a bank account for donations?"

Wolfgang also refuses to answer whether he was the one who (falsely) posted that "Lenny was at the front gate of his gated community" - a claim Wolfgang made numerous times.

Sanctions sought for recording hearing without approval
On May 24, 2017, Wolfgang's Sandy Hook Hoax partner Tony Mead recorded the hearing without obtaining permission of the court.  Tony, on behalf of Wolfgang, then posted the hearing to his Youtube channel. The motion alleges that since the publication, the law firm has received numerous threatening and insulting contacts to the extent that the law firm now fears for their safety.

Wolfgang's defense is to absurdly claim that Lenny Pozner is an "abstraction, a shadow, a figment".  If the best defense the hoaxers have is to hang their hat on a laughable Youtube created defense that Lenny actually doesn't exist, the hoaxers will surely lose, and lose big.

Stay sought for Deposition
Recently the court scheduled Lenny Pozner's deposition for Nov. 15, 2017.  Lenny seeks a stay of deposition because Wolfgang Halbig continues to hide from discovery.  Lenny's motion states that the complaint will be amended based on Halbig's answers to discovery.  To date, Halbig refuses to meaningfully answer even mundane discovery questions. It seems fruitless to have a deposition before the amended complaint is filed because the scope of the lawsuit will likely be significantly expanded.


You may download all of the documents in the case here:
https://courtrecords.lakecountyclerk.org/showcaseweb/#/caseDetails/1335568/dockets