This is a quick blog post to discuss Orlando attorney Cynthia Conlin and her actions in response to the horrible massacre at the Orlando Club, Pulse.  I will try to update the photos later- they usually mess up when I "blog by phone". 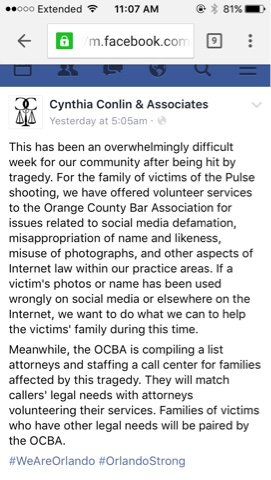 It appears Conlin believes she is fit to represent Orlando victims. Let me tell you why I think that is a bad idea.

The conspiracy theorists hoaxers have already begun claiming the Orlando Shooting was a "Hoax" by the government to "take guns" and promoting SandyHookJustice.com (her client's website and donation center) with the hoax claims; lead by CONLIN'S CLIENT, Wolfgang Halbig. 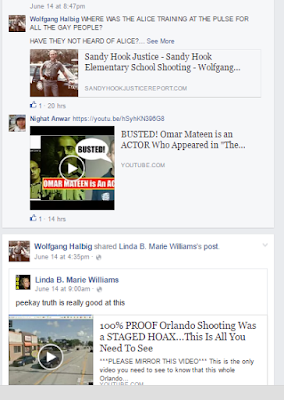 I will make a more detailed post later as I outline a  “who’s who” of Orlando hoax claims; however, I  want Orlando residents, families, and friends know exactly who they are dealing with in the pushing of disgusting hoax claims and that that includes the "Florida Four"; these people live right in the backyard of The Pulse night club:

These are the main leaders of hoaxers that are already targeting the victims of the Orlando shooting with absurd conspiracy theories.

Cynthia Conlin is attempting to insert herself into the public arena of the controversy surrounding the Orlando shooting by publicly offering to represent victims against online defamation.  Because of Conlin’s direct affiliation with Hoaxer conspiracy theorist Halbig and her aid by conducting legal attacks on several who attempted to defend the Sandy Hook victims from Wolfgang Halbig's vicious allegations over Sandy Hook, this is ridiculous and needs exposure now.

Wolfgang Halbig is a well known conspiracy theorist leader that has been fully documented on this blog.  Wolfgang leads an online group against victims of high profile violence. While Wolfgang Halbig mostly focuses on the children or hurt families of Sandy Hook, he has discussed other conspiracy theories including Boston Bombing and San Bernardino.

Right now, Halbig’s focus is on the Orlando massacre and he is spreading the false and idiotic claim that the Orlando shooting is a hoax. 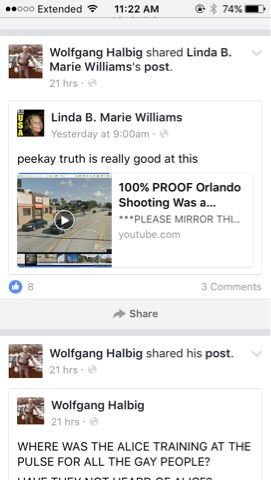 Wolfgang Halbig is, as we post this, repeatedly posting links to hoaxer videos alleging to “prove hoax” – in other words, Halbig is spreading the lie that the Orlando Shooting is a hoax.

Most of the videos Halbig is sharing are by “Peekay Truth”; a well known child and woman stalker and predator from Australia.  In the videos Halbig shares (and other videos by Peekay), Peekay is openly mocking the victims, laughing at them, cussing at them, calling them horrible names (such as “dirty faggots”) etc.

That is where you find Conlin, lined up behind Halbig; Halbig's legal muscle.

Most normal people are disgusted by people like Halbig.   If you were to take Halbig to task for his spreading of these horrific lies and videos, he just might sue you to shut you up, especially if you cut into his profit margin by exposing lies.  Halbig doesn’t like it when you use your free speech to point out his lies. 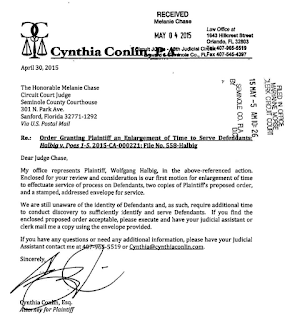 Conlin is not a “defender of Halbig's free speech”; exactly the opposite. If you speak out against Wolfgang Halbig and his disgusting commentary about crime victims (even though he is a public figure and your commentary in response is protected free speech), you may end up with a SLAPP lawsuit (anti-free speech lawsuit) filed against you by Cynthia Conlin; and she obviously does not care if your commentary is in fact free speech.  She will shut you down with overwhelming legal force.

SandyHookFacts was awarded about $23,000 for Halbig and Conlin’s SLAPP suit activities and the damages she caused this blog by attempting to infringe on our free speech.

Conlin has used her lawsuits resulting in the shut down numerous blogs (including Sandy Hook Defense League and “WolfgangExposed.com”). Their blogs  were merely attempting to expose Halbig for exactly what he is.

Now the shoe is on the other foot and Orlando has been hit with a horrible tragedy.

Conlin’s conflict of interest is very clear here.  She wants to represent victims of the Orlando shooting; yet she already represents the man  that is promoting the conspiracy that the victims are lying, government agents out to take guns, faking it, crisis actors, frauds, etc.  What is this? It gives the appearance of an "you set em up, I'll take em down" type arrangement!

Sandy Hook Facts finds Cynthia Conlin and her ties to hoaxer Wolfgang Halbig unacceptable, especially If she wants to "help" Orlando victims.  She could most help Victim's and their families them by keeping her hoaxer client at bay!

Conlin's Client really getting into the "hoax" posts, repeating them ad nauseum. 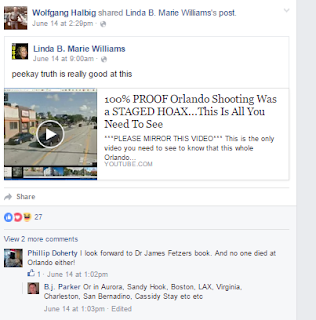 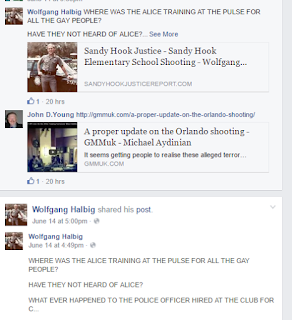 Not to mention: Wolfgang Tells A Whopper under oath, Wolfgang Claims to be MLK's driver, and Claims to be Certified Fire Inspector.

Presented by SandyHookFacts.com at 11:33 AM

There's another aspect of Orlando not yet considered, far as I can see. One victim shot five times, though alive, was pulled to safety by a police officer whom he does not know, though heaping praise on the individual and on those who treated him at the nearby hospital. He was pulled through a slurry of blood, alcohol and broken glass, experiencing significant lacerations in the process.

So what do you think? He was in a gay club. If he himself wasn't HIV positive, there's an odds on chance that he is going to be now. I see a field day for the legal profession.

lotsa lawsuits coming i would guess

So, because people are carrying victims back to the Pulse nightclub, ya know...where the ambulances and police had arrived and set up, is proof this shooting is a hoax? What these morons don't have the brains or honesty to admit is, the shooting was over when these videos were taken...and the people who had made it out, now had to get medical help...and that medical help WAS AT THE NIGHTCLUB WHERE THEY AMBULANCES WERE.

and so no one has figured out how to stop Wolfgang Halbig yet? this guy is still in business?