It really is must see.

Veronique Pozner has “cried enough tears to fill an ocean” in the past three years. Her six-year-old son Noah was ripped from her by a man with a military style assault rifle at Sandy Hook school, Connecticut, in December 2012. 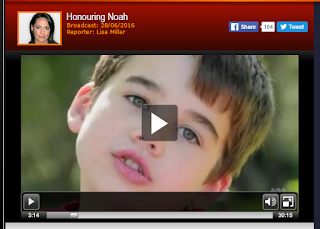 It is so nice to see a video titled "Honouring Noah" rather than the hoaxer garbage that is far too prevalent online. I wish there were more pieces of journalism like this.

For a while I sort of couldn't figure out how I could have such strong admiration towards the Pozners when I couldn't imagine being in their position, going through such a loss. I'm sure they would give anything to go back to their lives before 12/14.

But they really are admirable people. They are working through so much hate to make the world a better place, a world that has given them so much heartache and continues to hurt them and the memory of their son. They have strength I know I would never have. In response to the most vile and disgusting things I've ever witnessed online, they still show class and grace. They deserve so much better than the harassment they receive. I really hope that someday the authorities can get a handle on this crazy hoaxer movement. Becoming victims of the second amendment shouldn't leave people open to abuse of the first amendment. My heart just breaks for them.

Well stated. We have a problem in this country when innocent people, the victims of horrific crimes are identified, portrayed (and harassed) to be nothing more than part of the "gubment" conspiracy, part of some nefarious plan to take away someone's Rights. I fear for our country as I watch the collective intelligence grow more ignorant everyday.

While I'm on the side of Free Speech, there needs to be some checks and balances to combat the blatant BULSH flowing from the mouth of those like Alex Jones, Jim Fetzer and others ....designed to do nothing more than generate ignorance, lies and misinformation to the gullible....all so they can make a buck.