William Shanley's third legal loss related to Sandy Hook is a devastating defeat to hoaxers as the court finally dismissed Shanley's case with prejudice. With prejudice means that the case is so defective that it cannot even be cured by amending; the court finding any such amending would be "futile.

The Court's 3 page ruling issued 12-22-15 found that claims of government conspiracy related to Sandy Hook;  claims that "the shooting never actually happened" have no "arguable basis in law or fact".

This is something Sandy Hook Facts has been telling hoaxers for over 2 years. 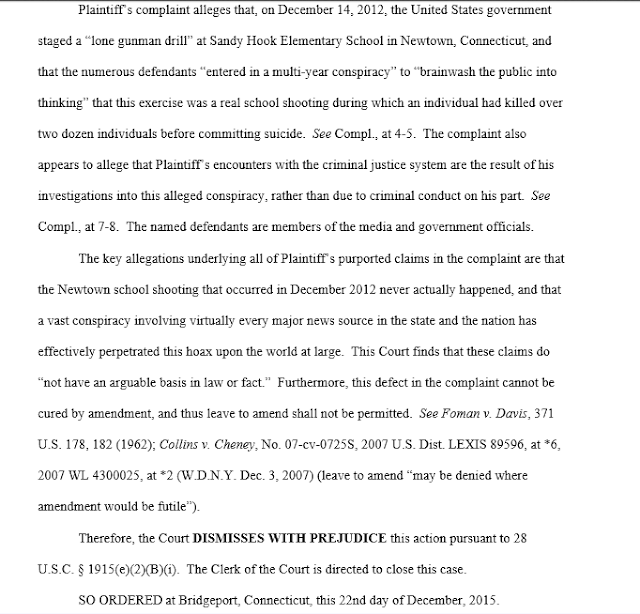 The Judge allowed this case to sit stalled in the court for 8 months, essentially ignoring Shanley's numerous pleadings other than "terminating" each filing as it came in.  Sandy Hook Facts has previously wondered how long the judge would allow this to go on.  Not a single defendant bothered to file a single page in response. 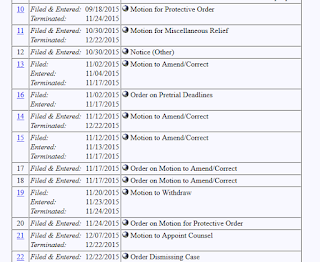 This lawsuit initially only sued national media; however, the later filings by Shanley attempted to amend adding Connecticut politicians.  The lawuit sought a meager $3 billion dollars for Shanley and f and $5 trillion dollars to establish a "News trust to free the republic from Tyranny".

Hoaxers once again walk away as losers.

Presented by SandyHookFacts.com at 8:25 PM

"DISMISSES WITH PREDJUDICE" Isn't that how we all feel.