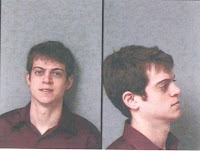 If you follow Sandy Hook, you know Jonathan Reich.  Reich has been covered extensively on this blog as a hoaxer prosecuted for harassing Sandy Hook charities and officials and as a public front-man, webmaster, and host for Wolfgang Halbig's Sandy Hook Justice organization. 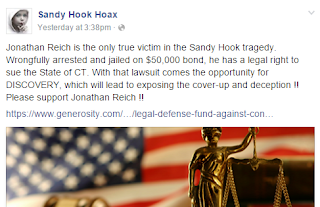 While Hoax Group fundraising usually centers around the leader, Wolfgang Halbig, this incarnation centers on Reich's claim he is using criminal his own prosecution to obtain the  "Undredacted Report (on Sandy Hook)".  Reich is also claiming to be denied a "speedy trial" to gain sympathy.


Obviously, speedy trial is moot because Reich is a fugitive with a warrant for his arrest for failing to appear for his Pre-trial!
.

Despite Reich's fugitive status, Reich states he is demanding copies of the "Unredacted Sandy Hook Final Report" for his trial.  What trial? Reich is on the run!

The Connecticut State Police redacted the photos of the deceased victims from the final report before releasing it to the public.  Reich wants those items, his "Unredacted Report" request is nothing more than a sick ruse.

We all know what hoaxers will do if they get their hands on the unredacted photos of murdered Sandy Hook children and teachers.  They will fawn over them, drool over them, photoshop them, mock them, and 'Meme' them, just as they do with Boston Bombing gore photos.

Just a few days ago, Wolfgang Halbig sickeningly pretended to want to send flowers and Christmas presents to the person in this photo: 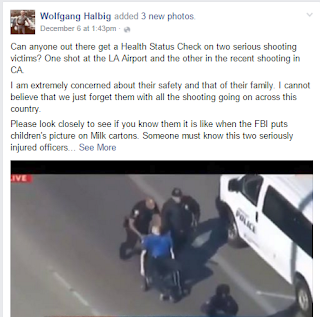 Halbig's money is safe.  The TSA officer in that photo, a husband and father, Gerardo Hernandez died in the 2013 terrorist attack pictured and his funeral and memorial service was in Nov. 2013. Facts and family pain doesn't stop hoaxer mocking.

That is precisely what Sandy Hook families have to look forward to if Reich is successful in getting these photos.  Hoaxer exploitation.

Reich's lofty fundraising goal of $50,000 seems a little high for his insignificant misdemeanor case, especially since Reich claiming to have already spent $50,000 fighting the case.

Most of us could not even afford to spend $50,000 fighting off a little misdemeanor rap; then again, most of us are not a coddled son of a wealthy New York Business Attorney, as Reich is.  Reich's father is a well respected, and by all accounts, honorable. prominent member of several Jewish, Community, and Legal Organizations; and he already footed Reich's legal bills.

So what does Reich really need the money for?

SHF suggests Jon Reich quit running from the law, show up for court, do his community service, and move on with his life instead of dragging this case out and attempting to use it to hurt Newtown's families by attempting to get photos of their murdered children and using his case as a fund raising gimmick for a lawsuit against Connecticut that will never happen.


While Reich clearly labels it as a  "Legal Defense Fund"; to gullible hoaxer followers, the script is flipped and they are stating the funds are actually for a "Lawsuit".  For two years we've heard Hoax Group advertise for money to "sue" Connecticut.

Changing the goal of a fundraising campaign to match the target audience is an extremely deceptive fundraising tactic that may even be illegal.

To be clear, NO Sandy Hook related lawsuit against any government organization has EVER been filed by anyone affiliated with Sandy Hook Justice or Hoax Group despite two years of promises and tens of thousands of dollars in donations.  Not one. Ever.  The ONLY lawsuit filed by any Hoax Group member was by Wolfgang Halbig suing bloggers who used their first amendment rights to express opinion.

Reich claims the case has "dragged out for 19 court dates".  The reality is Reich's criminal prosecution case has been on hold since July, 2014 while Reich took advantage of Connecticut's Diversion Program.  Any "dragging out" of the case was on Reich's terms and to his benefit, not the states.

Reich apparently did not comply with the Diversion terms, which included completing a mental health program and appearing in court when ordered.  Prior to Reich absconding from the case, Reich's diversion was apparently terminated as unsuccessful and the prosecution resumed:

It is clear Hoax Group's goal is twofold: cause emotional pain to Newtown families and use gimmicks to raise money. Hoax Group and Sandy Hook Justice always seem to need "Just another $50,000" to bring Connecticut to "justice".

Obviously, an unredacted "Final Report" has no bearing on whether Reich made harassing phone calls to charities and homes of officials; this pathetic and painful gimmick is sickening.

Hoaxer harassment of victims of violent crimes is increasing and must be dealt with by Connecticut. Indeed, Connecticut promised the Sandy Hook Victims they would provide just that protection.  Where is that protection? 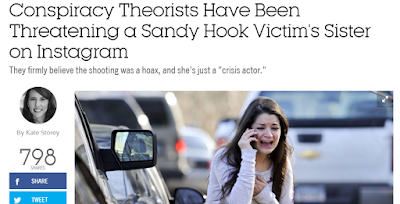 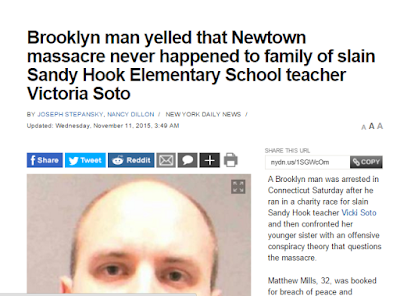 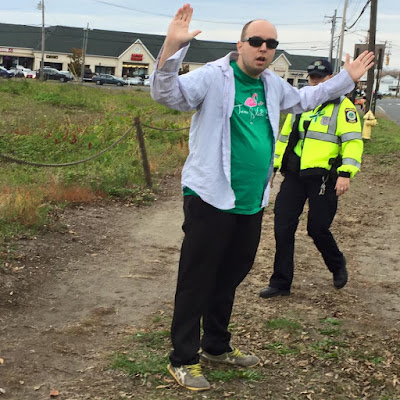 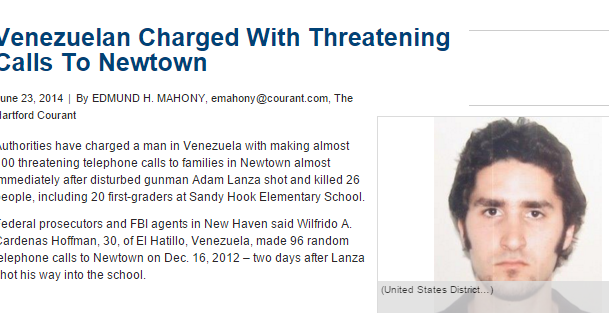 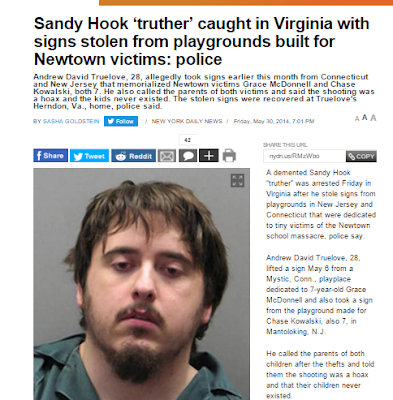 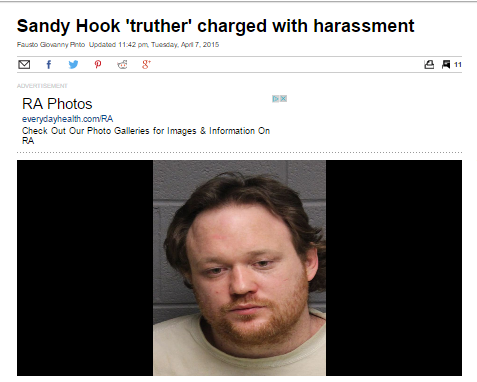 Presented by SandyHookFacts.com at 7:43 AM

When he does finally get to court, the Judge is going set him straight. He has no Right to see an unredacted final report as it has no bearing, whatsoever, on the harassing calls made.

He's an idiot and needs to be treated like one.

he belongs in a mental institution actually. he is delusional and possibly dangerous. he is clearly not respecting the law and thinks he can just manipulate the system and fail to honor his responsibilities to even show up in court! but what is particularly galling is the fact that he is being egged on by the hoaxer community, playing on his delusions, and making him think he is some sort of hero to the 'cause' - when in fact he is ruining his own life and adding mystery to those who lost their family members on that day. These disgusting pigs who are inspiring Reich to behave in this way should be held accountable.

i just wish there was SOME effort to ORGANIZE activists on this cause. maybe launch an organized letter-writing campaign to get action.

but - as we've seen in the news recently - we can't even get Twitter and Facebook to stop carrying ISIS recruitment propaganda - and they're going to care about THIS?