By now we know the story of the massacre in San Bernardino. 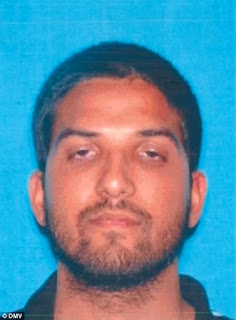 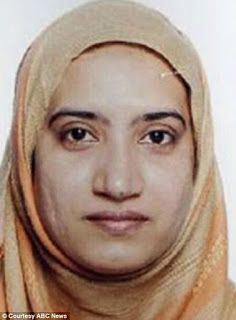 This shooting follows the ISIS attack in Paris.  As with Paris, the Sandy Hook Hoaxer community instantly took to defending the terrorists, providing aid as cover for the terrorists by declaring the attack a "hoax" staged by our Government. 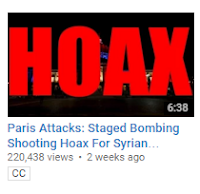 In a new twist, it appears the terrorists have openly embraced the hoaxers as allies and as front group.

Yesterday, the attorney of the terrorist's family openly joined with the hoaxers when their lawyer claimed "Sandy Hook hoax" as cover:

"There have been suggestions that it may be something that was related to their work, that somehow he was a disgruntled employee,' he said.   'But it doesn't seem plausible to us that this petite woman [Malik] would be involved in this sort of hyper-caricatured, Bonnie and Clyde crazy scenario.
'There were a lot of questions drawn with Sandy Hook and whether or not that was a real incident or not.
'But I mean obviously these things were found there, how they got there we don't know.'


As my readers know, to the "truther" every shooting is "fake" perpetrated by the government and every victim, witness, first responder, and family member are "crisis actors".   Terrorists arent real. ' Nothing to see here, move along'.
What better cover for terrorists than a "truther"?

As Wolfgang Halbig once stated of Newtown and their grief, "[They] are like the Truman Show". All fake. Society the enemy, terrorists the victims.

The truther claim's that the singular purpose of  "fake communities" is to stage"fake shootings" as part of a "FEMA Drill" to take guns. 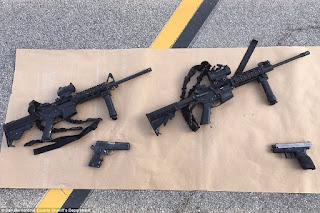 Most "truthers" are far from stable people, and their radical support of Islamists is concerning.
Here, a prominent Sandy Hook Hoax member appears to threaten any medical professional attempting to vaccinate someone he loves: 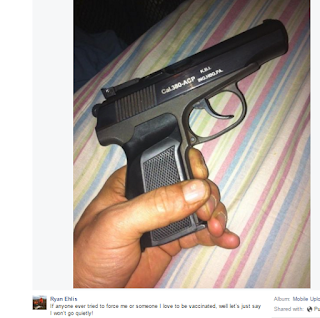 We can take hoaxer Ryan Ehlis' threat seriously, that particular hoaxer killed his 5 week old daughter with a shotgun and somehow got released on an insanity type deal.

As with so many other Hoaxers, it appears Ehlis spends the entire day ranting on Facebook and Google about abortion clinics, vaccines, chemtrails, government hoaxes, fake moon landings, flat earth, and of course, his massive his gun collection.

To this writer, it is a major issue that such openly mentally ill people, even those who have killed, have such easy access to guns in the first place; however, that is for another article.

San Bernardino is no different and the Hoaxers are already all over them.

The entire community there has been declared as "in on it"; it was a hoax, to "take guns" so goes the claims of the hoaxer.  Sandy Hook hoax group and James Tracy, Professor at Florida Atlantic University have both declared the shooting a "hoax": 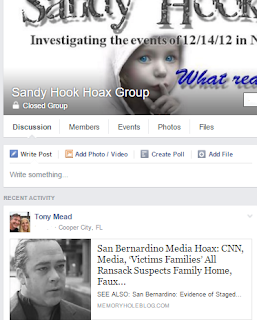 Member Youtube videos crying hoax are being pumped out at a frantic pace: 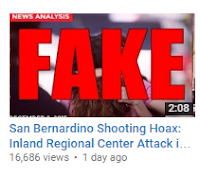 Just like the hoaxers did after Paris and Colorado: 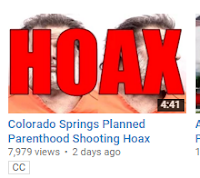 The next phase is equally predictable, hoaxers will gangstalk victims and families, believing that these victims are "government agents".  They attack them in public and through online stalking; the cycle continues.  Much like the Taliban, hoaxers attack anyone who speaks on the subject who is not inline with their cult-like mentality. 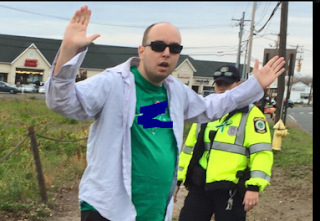 Obviously, ISIS along with the families of terrorists, have noticed their allied hoaxers and decided it is time to put them in play; now joining these hoaxers hand in hand.

When is society going to wake up and address terrorism, mental illness, and hoaxers?

It does not seem the San Bernardino shooting was enough; so we must wait for terrorists them to inflict a higher body count.  We know that no matter the body count, the Hoaxer community will be there to provide cover, comfort, and aid. 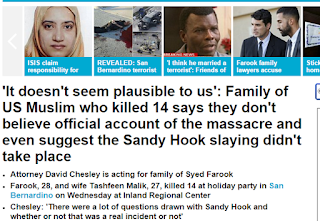 All the shots of blood must of course be fake.  The multiple videos of the shot out.
Presented by SandyHookFacts.com at 7:07 AM

It was inevitable that the terrorists would eventually latch onto this untapped source of support.

I know many (quite normal) Muslims who subscribe to the most extreme and unbelievable fringe conspiracies, the sole unifying factor being that 'Muslims are totally innocent' and that all these terrorists incidents are due to some nefarious secret Govt/Jewish/NWO faction 'faking events and trying to make them look bad' (Something that is totally superfluous, if we but look at the state of many 'Muslim majority' countries, like Pakistan, Saudi Arabia, Turkey etc we see that the extremist mindset is all too popular without any outside influence.)

So, I'm not surprised in the least that the terrorists and their families would decide to make milk this handy group of 'useful idiots' for all they are worth.

so - essentially - Sandy Hook Hoaxers are giving aid and comfort to terrorists. They are providing them with propaganda that could be used to incite and inspire more bloodshed - as well as the incitements we have already seen against victim's families.

i feel like I've lost my mind. i just can't believe that this is so out of control and so thoroughly ignored by the authorities.

It reminds me of all the crocodile tears people shed over 9/11 with "we will always remember" magnets on their cars - and then we just let the first responders die of cancer without proper medical care. after MILLIONS donated to Sandy Hook there isn't $1 being spent to provide legal cover for these families. No one cares.