There are many new to the "Sandy Hook Hoax" scene looking at the issue from a different point of view and many of these are unfamiliar with Wolfgang Halbig. For those people, Sandy Hook Facts wanted to put out a introductory video.

This video represents an ongoing project of collecting and cataloging Wolfgang's comments.  That cataloging is part of an ongoing investigation into Wolfgang Halbig's statements made as part of fundraising for his Charity, Sandy Hook Justice.. That work will be made privately  available upon request and may at some point be published publicly .

A search using Google or Youtube reveals the level Halbig fame as a public figure.


Halbig is the sole proprietor of a licensed charityin Florida called Sandy Hook Justice.  Wolfgang Halbig uses his charity to engage in activities such fundraising for filing lawsuits against Bloggers and Youtubers who fall into his wrath. In contrast, to his followers, Wolfgang claims he is taking on the "United States Government" and therefore needs funds for his legal bills.

You can visit www.SandyHookJustice.com and browse many of his published conspiracy theory pamphlets and articles and view his donation links.

There has never been a known 3rd party accounting of his income from donations.  In 2014,  Halbig raised the ceiling of his donation request from $100,000 to $250,000 prompting some to speculate that he had surpassed his original $100,000 fund raising goal.   Florida records indicate Halbig claimed he made exactly $32,000 through 12-31-14.  Halbig has not released his income records for 2015; however, it is doubtful he has raised in less than $50,000 considering some of his appearances are on shows with millions of international viewers.  Not bad for the self-made internet celebrity and his enterprise.

Halbig has thousands of devoted followers worldwide; some of whom brag that they donate to him every single month, so the money continues to flow.

"I am Lucky enough to receive an old age pension so my monthly donation is sent."  Proudly declared one of his devoted followers on social media.

Documents filed with the State of Florida by Wolfgang's Charity reveal odd accounting practices, odd expenses  (such as $5,000 to "paid informants") and also reveal he did not receive a license to fund-raise until September, 2014 despite the fact that according to his own court filings, he began fund raising in March, 2014.  This is covered in detail in past blog posts.

Hundreds of hours of Wolfgang's interviews and presentations are under review as part of a investigation into whether or not he is making false statements to induce others to donate money to his Licensed Charitable Organization. The following is a very brief compilation of some of Halbig's broadcast statements. 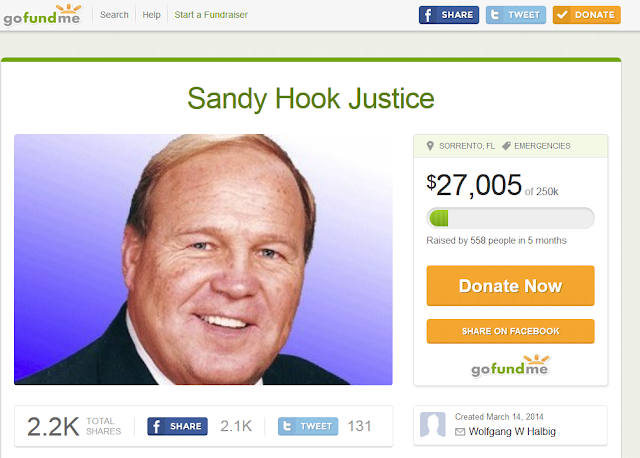 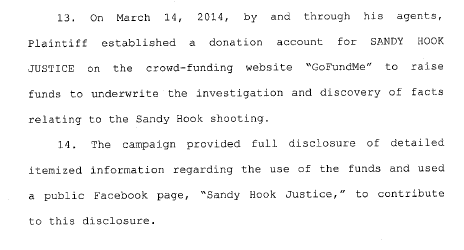 Presented by SandyHookFacts.com at 5:17 PM

what with Wolf getting cozy to Russia Today, this could have international implications. I would not at all be surprised if Halbig's Hoax is all a Putin disinformation plot to weaken support for the US government.