On December 14, 2012 Newtown mass shooter Adam Lanza, after killing twenty-seven people and wounding two others, put a pistol to the back of his head and committed suicide.   What happened to the shooters remains have been the source of speculation. I believe I have pieced some of it together and will present that here. 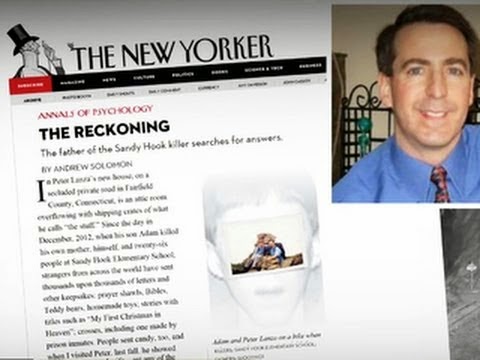 Let's start with one of the few pieces of information Peter Lanza has seen fit to release concerning the tragedy that his son loosed on that elementary school, information from his interview in the New Yorker, March 2014.

According to the article:


"Eventually, [Peter Lanza and Ryan Lanza] headed to New Hampshire to arrange Nancy’s funeral, and had to evade a stakeout by news media, which wanted to cover it. I asked what they had done about a funeral for Adam. “No one knows that,” Peter said. “And no one ever will.” 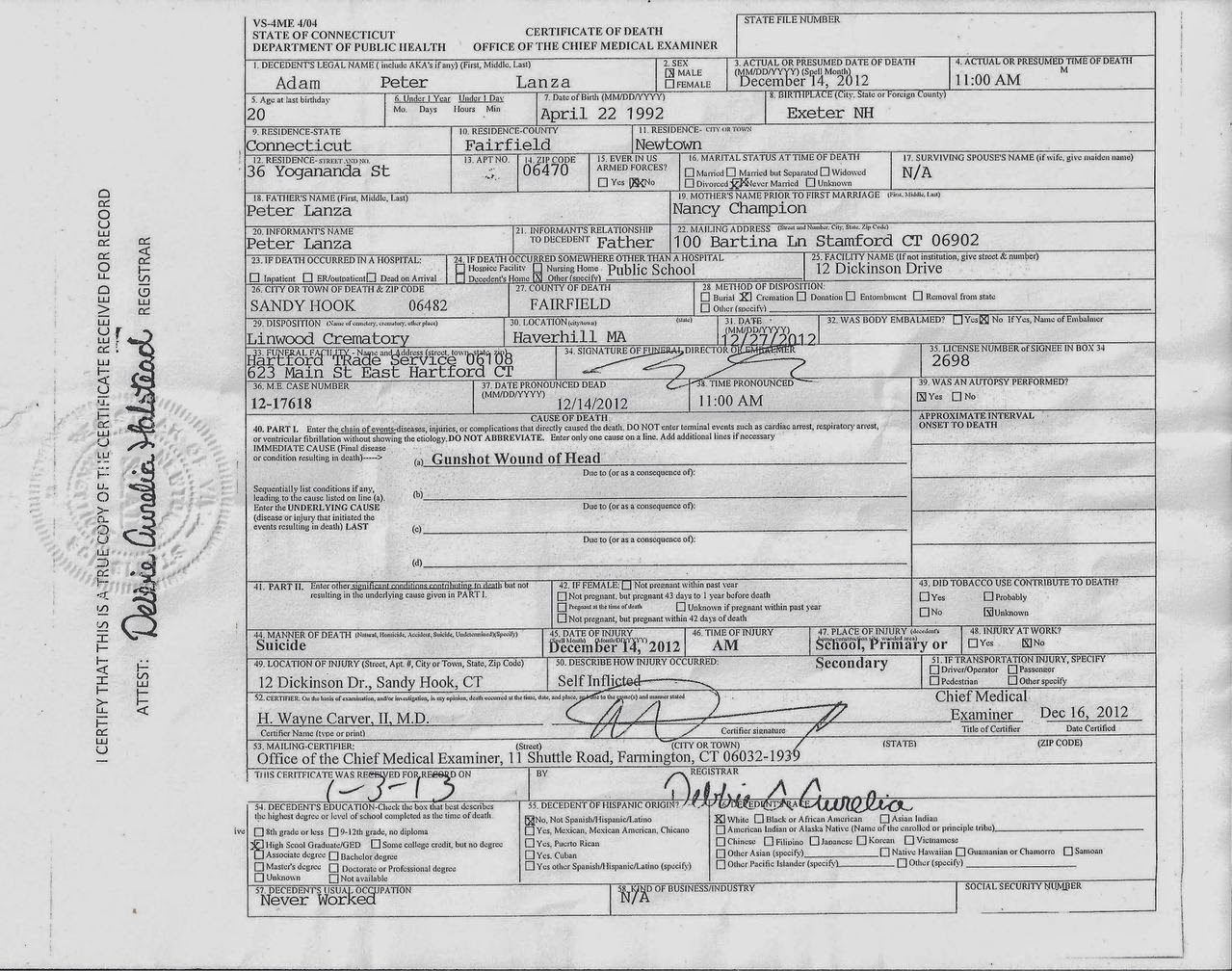 The shooter's Death Certificate is step one to "know that".

Early reports indicate that the Social Security Death Index (SSDI) list the shooter's Date of Death as December 13, 2014. This has been the basis of much speculation by hoaxers because, despite the fact the date is currently corrected in the SSDI, it is used to push a conspiracy theory that the shooter died the day before the shooting and therefore could not have been the shooter.

Since the shooter was found deceased in Classroom 10 of Sandy Hook Elementary School on December 14, 2012 with a self inflicted gunshot wound, it is an obvious clerical error. But how did such a mistake happen?  I think most have presumed the mistake to be that of the Social Security Department. Apparently, that is not the case.

One of the matters handled by a funeral home for the deceased is the official reporting of the death to the SSDI. One of the means of such reporting is via a form: Statement of Death by a Funeral Director. (Sample Social Security Department form here.)

A couple of unrelated funeral home websites touch on the process  here and here, provided for research purposed.

There are two Statement of Death's bearing the shooter's identifying information. 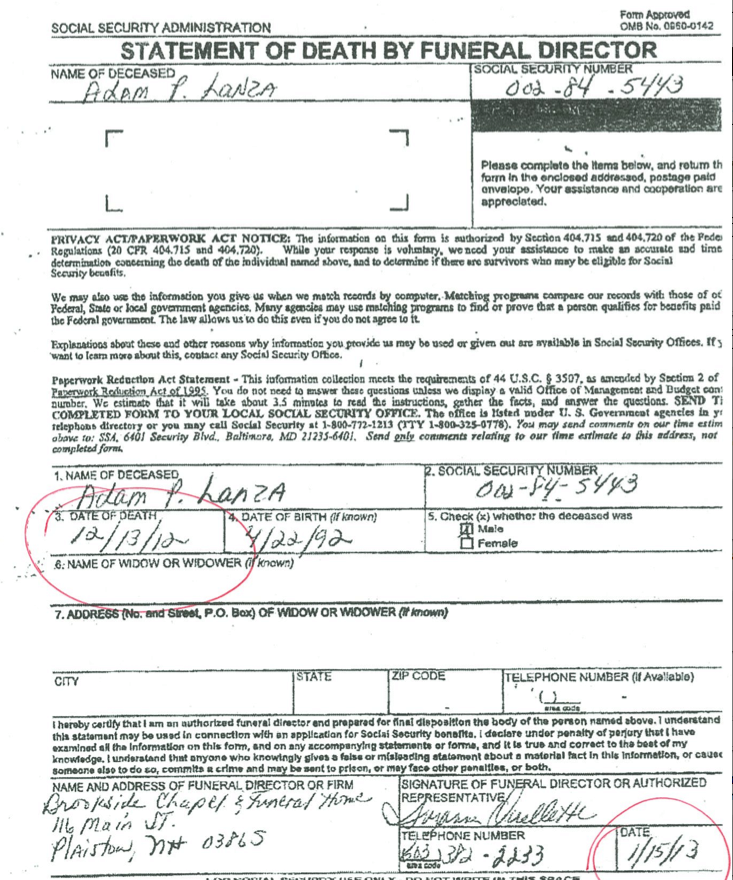 Both Statement of Death forms for the shooter appear to have been completed by by Suzzane Ouellette.

The funeral home is listed as Brookside Funeral Home on Main Street in Plaistow, New Hampshire.  Research indicates Suzzane Ouellette is the Secretary for Brookside Chapel and Funeral Home.

Disclaimer: The source of these forms is not confirmed.  Brookside Chapel and  Funeral Home and Suzzane Ouellette have refused to provide any information or answer any questions despite numerous requests by phone, email, and via facebook.  Promises that the "Funeral Director would call back" were unfulfilled.  If at any time Brookside Chapel  wishes to offer clarification or information, I will reference it.  For the purposes of the rest of the analysis, the forms will be given the presumption of legitimacy.  It appears these records can be obtained for a $16 fee from the Social Security Department via FOIA here and that is likely how these forms were obtained. 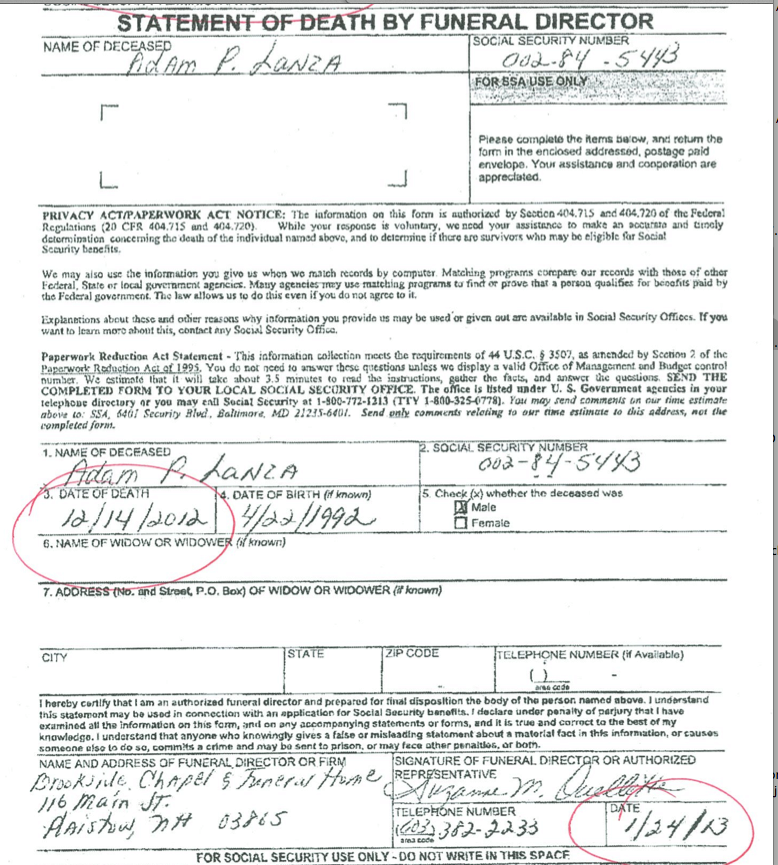 The first Statement of Death completed on 1/15/13 lists "Adam P. Lanza" with Date of Death as 12/13/12. This form provides the probable explanation as to why the original listing for the in the Death Index was listed as December 13, 2012: A clerical error by Brookside Chapel.

The second Statement of Death completed on 1/24/13 lists "Adam P. Lanza" with the Date of Death as 12/14/12. This would explain the subsequent correction in the SSDI to the correct shooters date of death, as it would have amended the first form to the corrected date.


The form, signed under penalty of perjury attests "I hereby certify that I am an authorized funeral director and prepared for final disposition the body of the person named above."  The form is to be signed by "Funeral Director or Authorized Representative"   The signature Brookside Chapel's secretary, Suzzane Ouellette, is apparently that authorized representative.  While a clerical error is not perjury, Ouellette's careless error about an infamous easily referenced date seems to be the actual source of countless Sandy Hoaxer blog posts and videos pushing Sandy Hook conspiracy theory.

It is noted that Brookside Chapel is not listed on the Death Certificate, the funeral facility is listed as "Hartford Trade Service" in East Hartford, Conn.   This local Connecticut funeral services provider would likely have been the funeral service provider to transport the shooter's body from the Office of the Chief Medical Examiner to Linwood Crematory.

It would appear, therefore that the Lanza family has dealt with the New Hampshire funeral home in the past. One theory is that that perhaps the shooters ashes were put with his grandfather's grave by Brookside Chapel. 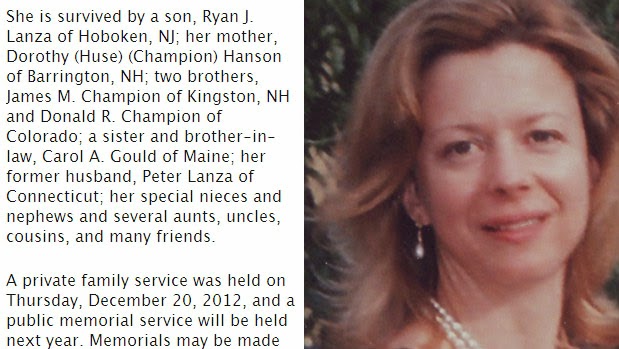 The obituary for Nancy J. Lanza, the shooters mother and first murder victim is silent as to her final disposition; however, according to Findagrave.com, she was buried at Plains Cemetary, in Kingston New Hampshire.

At this point, it is unknown if Brookside Chapel also handled her services.

It would, however, appear that, according to public records, all points converge in New Hampshire for the final disposition of remains for both the shooter and Nancy Lanza. This verifies the "glimpse"  provided by Peter Lanza in New Yorker interview.

I would also appear there is a very logicial explanation for the original error in the Social Security Death Index.

Unless new information develops, it appears this matter can now be put to rest.

Then depending on arrangements the family makes you would have the funeral home transport the deceased to you, pick them up at the out of state funeral home or in this case have then cremated and sent registered mail to your funeral home.