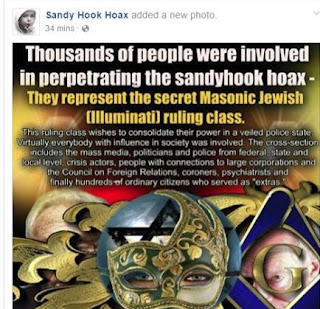 Those who know them best call them Sandy Hook Hoaxers; and for good reason.

The hoaxer is a dangerous, coercive, intimidating, and threatening breed of radicalized cult like conspiracy theorists; their actions taken in response to Youtube videos are bone chilling and in many cases, outright criminal.

The top echelon of the Sandy Hook "Truth movement" have built a narrative on false claims, fabricated photoshopped "evidence", misrepresentations, and outright fraud.

Worse still, the groups are operated by mentally ill, white supremacist, and /or militia members; most of whom are heavily armed and believe little children and mothers are in a plot to "take their guns".

Alex Jones has recently been attacking Sandy Hook Families, trolling them with false information and lies and doing so to breed hate and of course, to cause them pain.  There is really no other rational explanation for why Alex Jones is intentionally misrepresenting facts about the Sandy Hook shooting.

Sandy Hook Hoaxers are an organized group with leadership group, propaganda division, hackers, and attack trolls. At the top, are shills who line their pockets with cash, advancing hoax, and controlling the direction of the narratives.

The hoax leaders demand a lock step thinking. To ensure compliance, those that get out of line are subject to ridicule, banishment, and stalking.  Any one who publishes something they do not agree with are attacked, defamed, and stalked, and harassed. The hoaxer cult represents a danger to society.

Each and every day the hoaxer cult put out videos attacking anyone they believe to be affiliate with Sandy hook. For example, they have tried desperately to silence Sandy Hook Facts.

Sandy Hook Facts has had to wage TWO court battles as a result of hoaxer efforts; one to fend off a lawsuit from Wolfgang Halbig attempting to silence this blog and one to slap a restraining order on a Sandy Hook Hoax Group troll who went to far with his threats.    Wolfgang still owes Sandy Hook Facts about $25,000 for his assault on my free speech.

This video is a 20 minute compilation of the hatred Alex Jones and the Sandy Hook Hoax group have bred; however, it is just the tip of the ice berg anyone affiliated with Sandy Hook faces every single day.

Should this group be recognized as a hate group?
If you only watch one video on Sandy Hook truthers, this should be it.


For more information and a full debunking of the Sandy Hook Hoax charade, visit www.SandyHookFacts.com.

Presented by SandyHookFacts.com at 2:41 PM

This is just the beginning of many, I fear.

As the result of the election, I was scared that our country had turned into a group of haters. But when I learned that the popular vote went for Clinton by a pretty large number, I was relieved. But this election just goes to show how easily people are swayed. Historically, we have down this road before, giving voice to the hatred. But with social media, it's magnified, directed and lucrative. Your method of using fact to disarm their hysteria will win out in the end. But it will be a long road. Thank you for your effort.