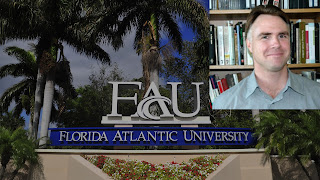 Several counts, including all state claims and the Fourth Amendment due process claims are dismissed with prejudice. This means Tracy cannot refile those claims Federally.  The ruling is summarized, with a link to the full order, below.

Some claims are dismissed without prejudice; thus the court is offering Tracy one last chance to present even a single coherent claim.

Tracy obviously could appeal the ruling.

The Judge apparently not appreciate the hoaxer "gish gallup conspiracy" methodology of the paranoid hoaxer professor; the judge opened his order stating:


As to the ruling itself-  Tracy's claims were addressed in eight points.

2. Tracy sued each named person in their personal capacity - the court found:


"The Court is unaware of any authority that stands for the proposition that FAU’s policy (which prohibits conflicts of interest) and FAU’s Form (which requires the disclosure of outside activities) violate clearly established law. "


The individual Defendants in their personal capacities are dismissed without prejudice as to Plaintiff’s allegations pertaining to his blog.

4. Tracy's request to get his job back,
The court found Tracy improperly plead the issue and the issue is moot based on the aforementioned dismissals.  Ouch!

5. Defendant's acting under color of law:
Defendant's motion to dismiss was denied on this point.

6. James Tracy claims he was denied due process!

James Tracy, in paranoid hoaxer fashion begged the court:  "Plaintiff argues that the due process available to him was “an illusion” because the Defendants were biased against him!"
The court said:

Defendants provided a due process forum, together with notice of that forum, pursuant to Plaintiff’s own allegations. Plaintiff’s procedural due process claim, Count VI, is dismissed with prejudice.

7. Plaintiff’s Claim for Conspiracy to Deprive him of Constitutional Rights"
Plaintiff’s conspiracy counts, Count VI and Count VII, are dismissed without prejudice.


(8) Plaintiff’s State Law Claims against the Union Defendants
Plaintiff’s Count IX and Count X are dismissed with prejudice due to the Court’s lack of subject matter jurisdiction over those claims.


Quick Opinion-
Allow me to digress for a moment, because I just reviewed an article Tracy recently wrote. The article proves that Tracy is dishonest and cruel. He does not deserve to be allowed to use Florida Atlantic University to bolster his false claims on his pathetic excuse for a blog; a blog where he posts false claim after false claim.  In my opinion, FAU tired of Tracy's false claims attacking victims of violent crime, and they got rid of him; Tracy's help them by not following the rules of his contract.

You need look no further than this 12/12/16 blog post on Veteran's Today on 12/12/16, to find Tracy's vicious, rank dishonesty and attack on a child's memory.  Tracy posted this photo and caption:


"Noah Pozner has the unusual distinction of having been reported to have died twice: once in Newton [sic] in 2012, then again in Pakistan in 2014."

The claim derives from Noah Pozner's photo being intermingled with other victims on Pakistan's grieving wall and other places.  Tracy morphs the photo into a narrative he can use to hurt Lenny Pozner.

Tracy's false claim is that "Noah was reported to have died twice,in Newtown and Pakistan."

The claim is completely false on it's face; much like Tracy's lawsuit claims.

No reputable news source or Government agency declared Noah Pozner, the son of Lenny Pozner, to have died twice. Tracy, literally, made that up.

Noah's photo's on a grieving wall in Pakistan and then being mixed in with victims, sometimes in error, is not a claim "Noah Pozner died twice".

It is obvious that Tracy is a vicious and cruel man who enjoys hurting victims of violent crime.
This is the exactly type of disgusting lies and harassment of Lenny Pozner that FAU  obviously tired of.


Now back to Tracy's well deserved trail of fail: 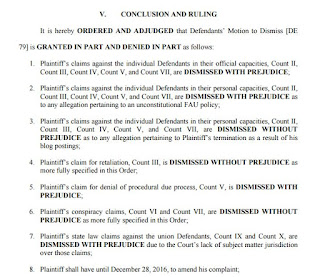 Tracy is simply not as smart as he would like everyone to believe he is. This "hoax" is easily disproved if one has the most basic of research skills and logic. The fact that this college professor cannot tell the difference, speaks directly to his level of intelligence.

James Tracy, you're an idiot who deserves to be employed as nothing more than a urinal mint taste tester.

So who is the hoaxer here?

No, you are confused. This article was back when his case was dismissed... note the publication date. You have to keep up with current events. Tracy's wacky attorney finally figured out how to write a complaint that passes muster... with his THIRD AMENDED COMPLAINT.. This is about attorney skill and it took him 3 times.