"I was assigned to Dr. Martin Luther King who was in St Augustine, Florida during a March on the beach" --Wolfgang Halbig email.

What kind of man would send an email to the NAACP and actually claim to have driven Martin Luther King, Jr. around 'safe and secure?' 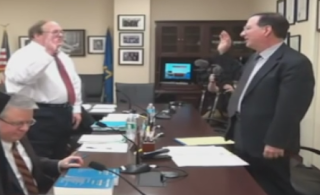 An email purportedly from Wolfgang Halbig appears to show that Wolfgang Halbig sent two emails to the  NAACP claiming to have been the driver of Martin Luther King, Jr. Halbig CC'd the second  email to numerous people.

The email, published in it's entirety below (except for some redactions), states in relevant part:

The greatest honor this old man of 70 ever had and will take to my grave is when I worked as a Florida State Trooper in Miami, Florida.

I was assigned to Dr. Martin Luther King who was in St Augustine, Florida during a March on the beach.  I had the privilege of driving him from the beach to the airport in order to get him out of town safe and secure,

I was young and when he died by gunfire he made me become a better teacher and school administrator when leaving the Highway patrol.


Is it possible for Wolfgang Halbig to have driven Martin Luther King, Jr. around as a State Trooper?

No.  Wolfgang Halbig was not a Florida State Trooper until 6 years after MLK's death. Furthermore, with his time in service at a year or less, it doesn't appear Wolfgang got muchfarther than   his probationary period as a trooper.

Wolfgang Halbig was a State Trooper for about one year beginning in  1974.
https://www.flhsmv.gov/fhp/history/academy/classacts/45thclassroster.pdf

If Wolfgang Halbig wants to prove he drove Martin Luther King, Jr, I welcome the proof of this claim. Already we tolerate so many of his claims without proof - Columbine, Presidential Detail, Customs Agent; however, making this claim to the NAACP as part of his "pitch" about Jonathan Reich, currently a fugitive wanted by the State of Connecticut, is beyond the pale.

Other than that, I expect what we usually get from the Sandy Hook Justice employee/agents/volunteers/hosts - some weak excuse set to swanky music and cartoon memes.


*UPDATE*  3/24/16:  In an second email obtained by Sandy Hook Facts, Wolfgang Halbig admits to sending the email. He admits he lied about driving MLK.  He  blames a "traitor" as the reason his disgusting act.  At this time, we are not going to release the document as the document is more flim flam from a filthy mind making excuses for his fund raising schemes and disgusting lies. 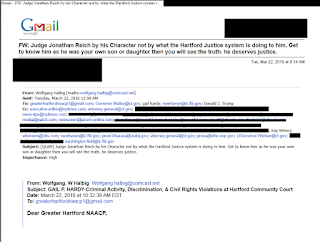 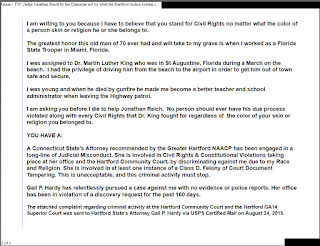 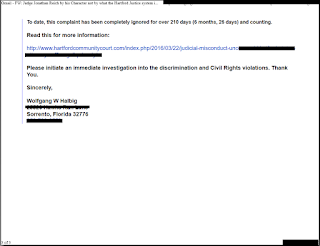 The email is uncharacteristically well written.  For example:

It is doubtful the quasi-illiterate Wolfgang Halbig could write the above sentence without assistance.  Therefore, it appears there could be some conspiracy at work within the Sandy Hook Justice organization to make the representation to the NAACP as part of an overall fundraising plan.

Recognizing that emails could be spoofed and that it appears Wolfgang Halbig received some "help" in authoring the ridiculous email claim, I researched the IP header tags of this against 3 other "characteristic" emails known to be from Wolfgang.  The originating IP header tags match the IP address of Wolfgang's other emails and prove to originate from Florida.

In any event, Wolfgang Halbig sent the email to the NAACP twice!  The second time sending it to his  attorney Kay Wilson and numerous other media groups, government agencies, and public personalities (including Donald Trump).

The above sentence would appear to match the article on HartfordCommunityCourt.com; therefore, it appears likely there has been collusion with the Sandy Hook Justice organization agents who author the site and with Halbig himself.

With an IP header and origination match, it appears Wolfgang Halbig cannot rationally deny the claim.

No doubt he will try. 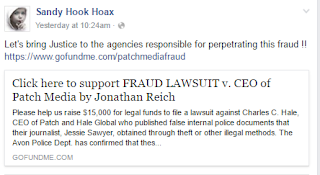 How can Jonathan Reich sue when he is currently  wanted in Connecticut and refuses to even answer to the charges?

As we know, Wolfgang Halbig and the Sandy Hook Justice crew has NEVER sued any government agency or news organization over Sandy Hook.  This adds more doubt to the fact they would ever attempt to sue The Patch.

Wolfgang Halbig has sued some bloggers in an self serving anti-free speech lawsuit that he lost. That's it. His promises to file lawsuits against Connecticut Officials or a Class Action lawsuit have apparently been hoaxes designed to get money out of his followers.

Other recent whoppers by Wolfgang Halbig:

Did the NFL issue a gag order or is Wolfgang Halbig lying?

Presented by SandyHookFacts.com at 9:13 PM

WOW....Just, WOW...How did he find time to drive MLK around Florida when he piloting the Lunar Capsule to the moon!

That wasn't until 1969, so he had lots of time to get over to Cape Kennedy for the launch.

Can't wait to hear about the docs from the NFL ...

You would think, with all the claims of the HoaxTards that have been debunked, proved beyond a doubt to be completely false, nonsense or irrelevant, these idiots would back off...and, yet they don't. They're simply too emotionally invested in their movement. A movement they have dishonestly and ignorantly wrap the Constitution around in the attempt to make what they do "noble" or "patriotic"...anyone who disputed, debunks or notes to the contrary is a "traitor" and fair game to whatever methods they can muster.

We have a problem in this country and this event is emblematic of that problem.

I noticed something about Wolfgang Halbig (more like Wolfman Halfpig). Wolfgang claims he was a Florida state trooper when he marched with MLK, Jr. and then heard the gunfire right in front of him when he marched with MLK, Jr. Well, he was ALLEGEDLY a Florida state trooper for a little over 1 year from 1973 to 1974 before he was terminated by his own department (gee, I wonder why he was terminated, maybe his own department figured out he is an unstable nutcase, lol). If he supposedly got the job in the 70s, and MLK, Jr. already died by gunfire in 1968, years earlier, then he obviously couldn't have been a Florida state trooper back when MLK, Jr. was alive. I guess when concocting his bs stories, Wolfgang didn't think that through. Looks like for a so-called 'teacher' and 'school principal/administrator' and 'school safety expert', math doesn't seem to be his strong suit, and neither is English since he has about 8 million typos and bad spelling and bad grammar all over the place. Oh, wait. Who am I kidding? NOTHING is that fat, nauseating pile of blubber's strong suit.﻿

An attempt was made to verify other claims made by Wolfgang Halbig and his "trooper days". Florida had no records. Publicly available info does prove he graduated in 1974; nothing else is verifiable. His resume claims 1 year - 74-75. We know there is a 1 year probationary period. No other detail he gives is verifiable... 200 autopsies, morgue, night time notification, homicide detective, Nixon detail, driving Martin Luther King, on record saying 74-77, etc.. I think at the end of the day, you have to consider the source and his credibility (or lack thereof).