It is well over three years since the first "bomb shell" video "proof" came out calling Sandy Hook a hoax. Since then, thousands of hoaxer "researchers" have spent tens of thousands of hours pouring over every Sandy Hook related article, news clip, and Facebook account they can find.  They have stalked children, plotted, schemed, harmed; yet, what have they to show for their efforts?

Sandy Hook Hoaxers do not have a single piece of real evidence of hoax.  Nothing.  They have plenty of looped videos, faked FEMA documents, forged emails, lies and photo shopped images of blurry Christmas Trees, but no evidence. 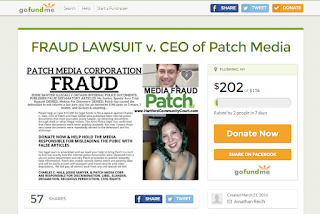 Even when discussing themselves, they lie. Wolfgang's recent ridiculous claim to the NAACP that he was Martin Luther King's driver exemplifies the hoaxer:

In a recent email, Wolfgang Halbig was complaining he had spent $78,000.  Lord knows he has likely raised much more than that; not to mention the likelihood of skim.

What does Wolfgang and his hoaxers have to show for it? Aside from a couple of Dash Cams that Sandy Hook Facts obtained for $20 and released before Wolfgang did, not much. 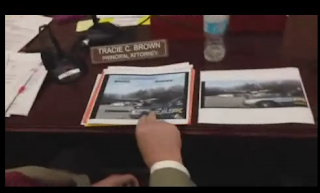 Most of the documents Wolfgang obtains through FOIA's are never released to his donors because he knows the material disprove his ridiculous claims. 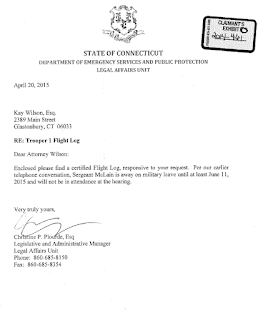 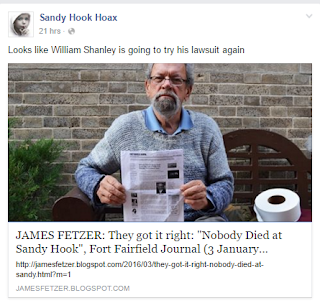 There is one big problem with Fetzer's blog post.  The lawsuit in question was already dismissed with prejudice (as Fetzer learned after publishing the piece), with the finding by the court that Shanley's claims have no basis in fact or law, as reported last year:
http://sandyhookanalysis.blogspot.com/2015/12/sandy-hook-lawsuit-dismissed-finding.html

The court dismissed the suit on it's own motion.

So that is the State of the Hoaxer.  No evidence. No new material. Nothing put out that has not already been debunked or discredited.  Nearly a $100,000 has washed into Wolfgang's pockets, and he has not produced a single substantive piece of evidence. The hoaxers are left republishing the same, tired, debunked memes that were published within a few months of the shooting, set now to different music and different transitions.

And with that, John Oliver nails it on Conspiracies.  Enjoy.

Wolfgang claims he was a Florida state trooper when he marched with MLK, Jr. and then heard the gunfire right in front of him when he marched with MLK, Jr. Well, he was ALLEGEDLY a Florida state trooper for a little over 1 year from 1973 to 1974 before he was terminated by his own department (gee, I wonder why he was terminated, maybe his own department figured out he is an unstable nutcase, lol). If he supposedly got the job in the 70s, and MLK, Jr. already died by gunfire in 1968, years earlier, then he obviously couldn't have been a Florida state trooper back when MLK, Jr. was alive. I guess when concocting his bs stories, Wolfgang didn't think that through. Looks like for a so-called 'teacher' and 'school principal/administrator' and 'school safety expert', math doesn't seem to be his strong suit, and neither is English since he has about 8 million typos and bad spelling and bad grammar all over the place. Oh, wait. Who am I kidding? NOTHING is that fat, nauseating pile of blubber's strong suit.

I have a question.
wolfgang has made many claims about being a State Trooper, and has based much of his life and credential's around this. Top of his class, homicide investigations etc.
Someone might wish to remind him as I'm sure it is the same in all police training establishments the first thing you learn is the LAW not how to investigate a homicide as I heard him say in an interview.

Why has no one done a FOIA request about this asking for his academy, probation and assignment records termination records?
As he is now a "Public Figure" I doubt section 6 of the FOIA Exemptions would apply.

"A personnel, medical, or similar file the release of which would constitute a clearly unwarranted invasion of personal privacy".

I doubt he could claim it was "unwarranted" as he has made it public to the world and therefore it is no longer private and it is in the public interest to verify his credentials.

I'm not from the US but I can see why people around the world see your country as a joke. I know its only a small group of people but they tarnish the rest of your country.
Denying the lives and memories of the people who lost their lives especially the children is just sick.

they claim to have all this irrefutable evidence that will stand up in court but all the do is talk and talk and talk, and yell at anyone who can prove it false.

Wolfgang needs to grow a set of balls and use his ill gotten gains, sorry donations and put the money where his mouth is and file it in court. Yeah Right. bet the money dries up real quick when that happens hence it will never happen.

please keep up the good work, I just wish there were more of you standing up for all the victims of this tragedy. Which is the saddest part of all most people seem to be silent. I know in my country there would be people outside his house protesting his outlandish claims.