A look at the pain caused by Hoaxers - Chris Mintz

Hoaxers are vermin that prowl online, going shooting to shooting with claims the shooting was a "hoax" by the government to "take their guns".  These Hoaxers believe the victims are "government agent" and therefore hoaxers believe they are justified in stalking and harassing these people.

One must ask:
Do those who are so mentally ill as to believe such radical delusional tripe really need guns?

The hoaxers have no ethical or moral boundaries. Whether you are a veteran, hero, wounded survivor, or a small young boy or girl, or parent of a murdered child, they will stalk and harass you relentlessly.  This writer has been personally stalked and harassed by Hoaxers and knows their pain first hand.

HONR Network has vowed to speak out against these terrorists and Sandy Hook Fact stands with HONR in that honorable mission.  Sandy Hook Facts has been exposing Hoaxers for two years and will continue to do so.

We have documents the harassment Chris Mintz faces - Sandy Hook Hoax Group members are already threatening to kill him.  We know how dangerous this group, in particular, is. 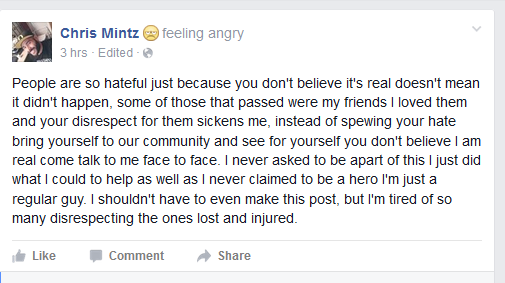 Presented by SandyHookFacts.com at 10:05 AM

This young man has every right to feel angry and disgusted by those who hold themselves up as authorities to determine what is real and what it is not. These bottom-feeding armchair detective wannabe's have no expertise or actual skillset on which to base their position other than, personal incredulity.

They all need to STFU and let the families grieve in peace and honor their loved ones.