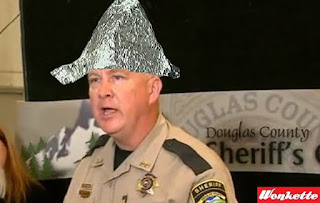 TheSandy Hook Hoax Hoaxers have taken to the internet in support of their Sheriff, John Hanlin.  Their main target was the video where CNN directly asked Sheriff Hanlin if he posted the Sandy Hook Hoaxer link. Obviously, he denied making the post; an absurd denial.

Hanlin also stated "That is not a conspiracy theory belief that I have".  It is unclear if he is alluding to perhaps other conspiracy theories he may share with hoaxers such as "Flat Earth" "Chemtrails" and calling every shooting in the news a "hoax" and every victim a "actor", "shill", or "government agent".


The comment section was the most shocking because Hoaxers showed what they really are about; typical anti government rants, psychotic rants, mean spirited  comments about children, threats of violence; and of a course, a subject this blog has covered many times; Sandy Hook Hoaxers calling to dig up the children's graves. This blog has covered the hoaxer propensity to grave stalk many times before.

Magulater took to her channel to expose Hanlin's supporters and Sandy Hook Facts believes that her video is very important. With this video, you see just how vile Sandy Hook Hoaxers really are.

Wolfgang Halbig, the leader of the hoaxers made calling for exhuming the children part of his fundraising sales pitch.  We documented that with this video:

Sandy Hook Facts believes Sheriff John Hanlin should have apologized. When he lied about his post, he showed his true colors. Hanlin's refusal to take responsibility for his own Facebook account was more akin to acting like a child lying about eating candy with chocolate all over his face than acting like a sheriff of a county.

Hanlin's failure to apologize showed a sociopathic level of lack of empathy; it is remarkable and sick he didn't even consider apologizing for the hurt his post caused families of Newtown.  Radical conspiracy theorist beliefs and sociopathic behavior is indicative of mental illness; he should be investigated fully, including a mental exam, and Sheriff John Hanlin should RESIGN. 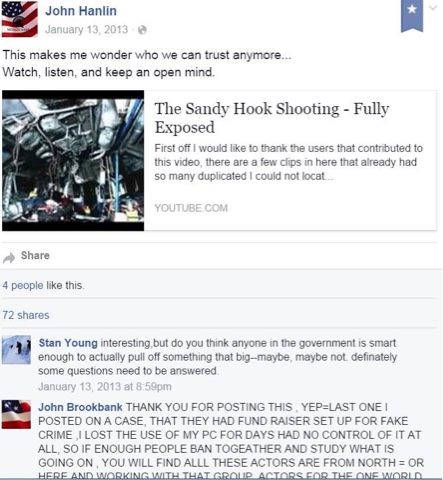 Presented by SandyHookFacts.com at 6:00 AM

I wonder what tune he whistles now? The Hoaxers have claimed the Oregon shooting was a hoax, also...so, does the former law enforcement officer have the BALLS and the HONESTY to come forward and address his Hoaxers friends and tell them, they're idiots?

no he does not because hoaxers are liars. they are the scum of the earth. they do not CARE what the truth is. they just care about being shills for the NRA.

do you think it is a COINCIDENCE that this guy is a rabid pro-gun fanatic writing letters to Joe Biden AND - what a COINCIDENCE - he also happens to forward conspiracy theories about Sandy Hook?

it is an AGENDA.

Why do you keep removing my comments? I am not using bad language.

I dont know your posts as you are anonymous; however, this is not a forum that can be overrun by hoaxer tripe. If you want your comment to make the cut say something thats not crazy.