“Who declared all those 26 people dead within the first 11 minutes? Connecticut law states that only a doctor can declare them dead, legally dead.” - Wolfgang Halbig, Sandy Hook Conspiracy Theorist

While a physician's formal declaration of death has a place in Connecticut law, using the term as it relates to response to a Mass Casualty Incident such as Sandy Hook Elementary School is word-smithing, more akin to children's magic show props than knowledge of Mass Causality Incidences and emergency medicine.

Connecticut Law
In the state of Connecticut, resuscitative measures must be started on a patient that is not breathing or is in cardiac arrest unless certain criteria are met.
(Note: A comprehensive list of references are available at the end of this article, below.)

One of those criteria is a licensed Connecticut physician or authorized nurse has the authority to declare a patient dead.  When that situation occurs, resuscitative measures need not be undertaken or may be discontinued.

For the average Sandy Hoax conspiracy theorist of little or no experience or training of modern MCI response, such as Wolfgang Halbig, James Fetzer, or Sofia Smallstorm, that is where they stop in their research and understanding of a Mass Casualty Incident (MCI) and more specifically, Connecticut law and MCI protocols.

However, that is not where Connecticut law stops. Connecticut EMS protocol follows "presumption of death" guidelines as it relates to the "average" trauma scene.  A victim that has suffered certain mortal wounds need not be treated.  For example: if the victim is beheaded or has other certain conditions considered "wounds incompatible with life", EMS need not provide resuscitation measures.  Likewise, in those instances, a physician need not declare those victims dead. The victim is presumed dead by the EMS responders. 1

One must still go farther than that when discussing Sandy Hook, because "presumption of death" protocols change for a Mass Casualty Incident (MCI).

Sandy Hook Elementary:
According to the final report, the Director of EMS for Danbury Hospital was on scene and pursuant to Connecticut mandate, SMART  triage was followed. 3   Further, the aforementioned document here has a specific section beginning on page 104 specifically detailing MCIs for North Central Connecticut EMS personnel, the jurisdiction covering the response that day.  SMART triage tagging is specifically discussed based on Connecticut mandate. 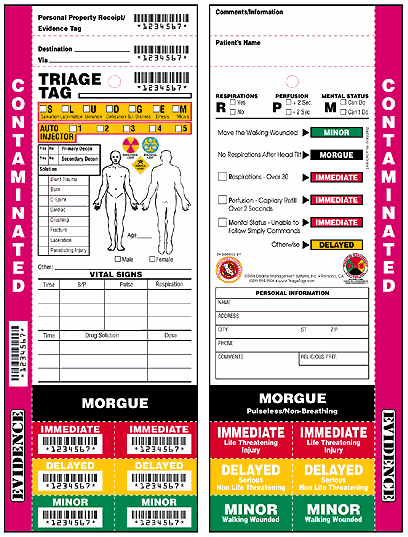 What is SMART triage?


The SMART triage system mandated in Connecticut follows certain mathematical criteria to determine when SMART Triage will be used. Essentially, it boils down to a formula of conditions, numerous casualties, and those casualties exceeding the number of responders. In that case, responders try to do the most good with the limited resources on hand. 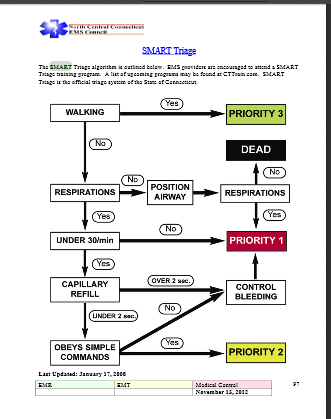 That describes the incident at Sandy Hook Elementary School and the initial response perfectly because there were 29 casualties, the number of shooters had not been ascertained, the scene was an active shooter response to a school, hundreds needed to be rescued, and numerous agencies responded. Add frantic parents and a hounding press to the extent of the injuries within the school;  Sandy Hook Elementary was a high-stress Mass Casualty Incident in every sense of the term.

Responding personnel had been specifically trained in how to manage a MCI, following SMART triage guidlines since it was mandated 2007.  The mandated protocol was implemented on December 14, 2012, and SMART triaging of victims was followed.

So what did that mean for victims?  Well, to put it directly, those victims, who were shot multiple times and were unresponsive and not breathing, they were "black tagged" and therefore "presumed dead" by first responders.  Only two of the children who were shot that day were breathing, and they were evacuated to Danbury Hospital, the pediatric trauma center for Connecticut.  Those two children perished.   There were two  teachers who suffered non-life threatening gun shot wounds and they were also evacuated to the hospital.  Those two teachers survived.

Every other victim was shot dead, and that presumption made in accordance with law and mandates, and that was done on scene. The victims had suffered devastating wounds incompatible with life. This is documented in statement after statement by responding personnel.

Why is this system followed? Because the survival rate of a patient with traumatic penetrating injury who is unresponsive and unable to breath on their own is virtually nil. 5 In a scene of this magnitude, with scant resources available at the first responder level, that is the way it is done. That IS the law.

So, to answer the Conspiracy Theorist's question, "Who 'declared' the victims dead at Sandy Hook Elementary School that day?" EMS did, and they did so in accordance with Connecticut Law.  A doctor's certification of death was not necessary because that is NOT the law in Connecticut.

I like this I really do. cause that a big one right there. I'm t trying to get both sides of this. I have seen everything from the Hoak side. and now I'm getting everything from the reports, and the real media and everything so I can gather my own personal conclusion. that's what everyone should do.
the only thing that I wounder about with this is.
from what I seen on the news, and everything else was the EMS wasn't even allowed to get near the school. they where told to wait at the firehouse and only move IF needed.
that and another big thing that bothered me is they left the children inside tell night time and only then did they bring them out in the dead of night. that's unheard of.

I'm looking at both sides of the scope. I have what the hoak people believe, and I have what was released on tv. some of witch us very questionable in and of itself. Roby parker. a man who is smiling and happy his first interview, then on his second tells everyone it was the shooters god given right to kill his daughter. no that's not plausible. I live in utah. I know how they act.
I've seen first hand the Devastation. these people are mad the grieving there crying, they can bearly talk about there children without completely breaking down. now if the death had been expected like his 6 year old had cancer or some other illness I can see him saying it was gods right to take her. I can see him being somewhat happy that she was no longer suffering. but from something so tragic. a life ripped away from them before she had a chance to live.
that is not the reaction that should have been there. and if his daughter had been murdered or kidnapped at his home, he would be a prime suspect just because of that attitude and statement given.

Just to let you know, ALL ESU personnel and law enforcement personnel are trained and certified as either EMR or EMT and some elect to be licensed as Paramedics prior to applying to the state police. in fact the only Fire and EMS agencies allowed on the scene were Sandy Hook Fire&Rescue and Newtown EMS as they responded directly to the scene and made the declaration for a Mass Casualty Incident. They were not allowed into the building immediately as ESU had not given the building an all clear which is standard protocol for an active shooting situation. With that being said, four people were taken to the hospital the two adults who sustained injuries and were able to compensate from the trauma survived while the two children were already in shock and were rapidly decompensating and were pulled from the building by state troopers that entered the building. despite the best efforts of the EMS personnel and the ER Staff the children unfortunately succumbed to their injuries. when it comes to triaging casualties, if a person is not breathing you should reposition the airway. if they breathe, you tag them red and move on, if they are still not breathing you tag them dead and move on as there is nothing you can do to save them.