"The mainstream media has neglected their duties and refused to report on a case of national attention" - HartfordCommunityCourt.com admitting Jonathan Reich's public interest status based on their  "pro-Jonathan Reich" website, an entire web blog dedicated to the Jonathan Reich criminal prosecution by Connecticut.

Patch.com struck back with a powerful motion to dismiss response, which among other things, pleads that the suit is years past statute of limitations, as was covered here:
http://sandyhookanalysis.blogspot.com/2016/09/dismissal-sought-in-jonathan-reich-vs.html

As a side note, SandyHookFacts.com was disturbed to learn that one of Sandy Hoax Group's racist shills was launching fundraiser drives for Jonathan Reich while, apparently, speaking with Reich himself.  When Robin, aka "HowISeetheworld" is not calling for attacks of government officials, he is anti-American racist Nazi who rails about his hatred of Jews on near daily basis.  SandyHookFacts.com finds Robin's racism disgusting and nauseating.   You can listen to some his vitriol and antisemitic tirade here:

Reich's motion was originally set for October; however, Patch.com attorneys agreed with Reich's request to postpone the motion for further pleadings.

On the deadline day, Jonathan Reich finally responded to  Patch.com's motion to dismiss.

I'm going to offer a few thoughts on the pleading.

Wilder's alleged failure to communicate with Defendant
To begin the pleading, Reich's attorney, Nick Wilder, rages for three pages about how his alleged illness was the cause of his failure to respond to Patch.com attorney's after filing suit.

Rather than risk contact from one of Mr. Wilder's nephrlogists, SHF will just move on from that issue and wish him the best in his continued recovery from "illness" and such.  I doubt the court will entertain the "he said / no he said" issue at all. The case is on track and whether Wilder was really too sick to to take five minutes to reply is really moot now.

Wilder then conflates a Motion to Dismiss and a motion for Summary Judgement. This is all nonsense; however, if Reich clears the Statute hurdle, the case would likely at least proceed to discovery.


Statute of Limitations
It is simple. New York has a one year statute of limitations. The articles were written over three years ago. Done, right?

The lawsuit appeared frivolous; however,  Reich attorney appears to be attempting trying to carve himself out a brand new exception to the statute of limitations.  Buried in his pleading is just a few nonspecific paragraphs on the subject.

In short, it appears Reich will argue that the creation of a slippery slope is in order, and that each time Patch.com created a new subdomain for itself, it was a republication of the original link, and thus restarting the statute of limitations.  To support their argument, they rely on the above case where the appeals court specifically did not rule on that issue.

Reich is hoping to set a new precedent that would allow him to hurdle the statute of limitations for defamation; almost negating the statue itself when applied to large news websites.    If the court did find that this action by Patch.com was a republication, it could rule the lawsuit may proceed.

It also means the court could bag out of this case easily by simply rejecting Reich's argument, dismissing the case, and letting it go die on appeal.  That appears to be the most logical route the court would go.

It seems reasonable the court would offer the parites some time to present their argument before ruling on Patch's motion to dismiss.

Either way, that is a matter of law the court will decide and that makes the ruling anyone's guess.  It does appear this case could offer further fundraising opportunity as it will likely drag on for several months.

Sandy Hook Facts.com will closely look at the merits of the case if Reich hurdles the time bar; however, don't expect to be impressed with the case.  The pleading is as weak as you have come to expect from other hoaxer lawsuits.

Reich alleges gems such as:


"Malicious intent is found when publishing witness names and details not
authorized to be published according to Avon Police Department procedures, and
through the controlled release of pre-written articles."


So we would need to believe courts must gauge itself on Avon Police procedures and whether those police procedures restrain our first amendment protected press?  The court will roll it's eyes over such nonsense.

“the article published on 5/22/2013 claimed that Plaintiff made ‘threatening calls’ to the Chief Medical examiner” and the “statement falsely claims as a factual matter that Mr. Reich ‘harassed’ Dr. Carver”

The article is here and it claims no such thing:
http://patch.com/connecticut/farmington/ct-chief-medical-examiner-received-threatening-calls-referencing-newtown-shooting-probe

More outrageously, Reich is presently a fugitive from justice and Connecticut has a warrant out for his arrest for $100,000 on that very case.

Can a fugitive sue for defamation while hiding from answering the charges of Connecticut? That is an interesting legal question!

Hoaxers themselves admit Reich's case is of national interest
Most importantly, Reich completely forgets his status as a public figure by virtue of the fact he is involved in a prosecution of public interest.  The people have a First Amendment right to discuss cases, especially those of "national interest."

Aside from the fact Reich himself is going on international radio programs such as John Wells, Reich's own supporters create websites dedicated solely to his case:

Reich's people call his cases deserving of "national attention", and they even call the press themselves to ask them to cover the story, according to the HartfordCommunityCourt website.  HartfordCommunityCourt.com is a ruse of a website that purports itself to be a legal blog when in reality it is site dedicated to spreading Reich's case throughout the interwebs. 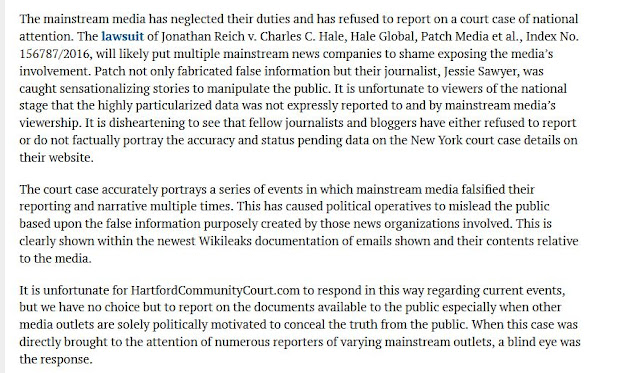 You can't have it both ways, Jonny!  Reich just might want to read what his friends are publishing, Your case is public record and of national importance; in that I agree with the SandyHookJustice websites.  HartfordCommunityCourt has dozens of articles on Jonathan Reich (in fact, it is their sole reason for existence).   Hoaxers  bemoan the fact that main stream news are not covering it: "it is disheartening to see that journalists and loggers have refused to report.."   and "when the case is directly brought to the attention [of mainstream reporters], a blind eye was the response."

By stipulation, the Defendants have until Nov. 25 to respond and a conference is set for December 5.


So in closing, obviously, the lawsuit is bogus and littered with nonsense.   Cases such as this are why SandyHookFacts.com supports nationwide the SLAPP protections, such as those offered in SandyHookFacts jurisdiction, California.

Small link: http://bit.ly/2fHbZ38 to this article

Presented by SandyHookFacts.com at 7:58 PM

Is the john reich fundraising campaign considered aiding and abetting a fugitive? Can law enforcement go after those who donate money to reich If they can track the donations?