Sandy Hook Facts was not happy to see that Danbury Superior Court Judge Dan Shaban decided to give the hoaxers a chance to make their case as to why they should be allowed to intervene.

Frankly, Shanley's motion to file a brief never raised even a slight factual or legally cognizable issue and the judge should not have entertained it for a moment.

The hoaxers were graciously given their fair chance to make their case; however they failed. In the words of the judge: [Hoaxers did not cite] "any legal authority to support his request to appear as amicus curiae and file a brief."

The court has ruled and the hoaxers have failed!  The judge has removed the hoaxer from the case and denied their motion to intervene.


"[The Hoaxers] purpose appears to be more to intervene as a party and contest the evidence in an adversarial manner rather than act as a friend of the court.  The information sought to be put before the court would not assist in the resolution of any matters of law in this case of which there is doubt."


The judge highlighting that the hoaxers appear adversarial and NOT a friend of the court is the understatement of the year. 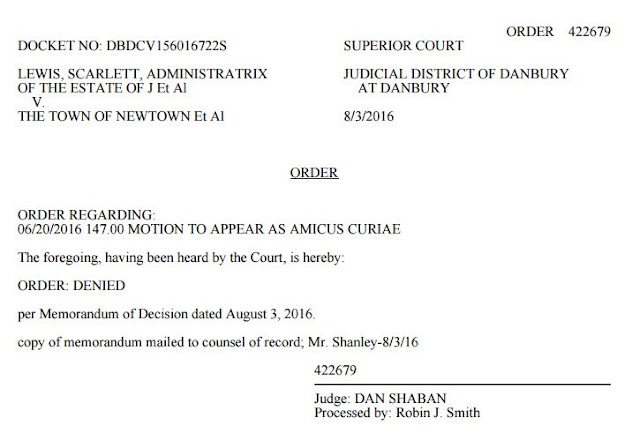 Presented by SandyHookFacts.com at 5:44 PM

That door has now been closed for good...as it should have been long ago

If Adam Lanza had survived and stood trial, he would be laughing like the Joker at those hoaxers. They give people like Dylann Roof and Dschochar Zarnajew satisfaction. Instand of shaming those people, they make them victms or crisis actors. People like Shanley are their apologists and that's really disturbing.