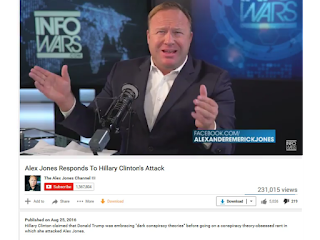 Hillary Clinton recently accused Alex Jones of, essentially, being a Sandy Hook Hoaxer.
This has been covered some in main stream press:
https://www.rawstory.com/2016/08/alex-jones-seethes-in-rage-over-clintons-jabs-they-have-created-a-fake-alex-jones/

He has called the participants actors. Alex Jones has pushed obvious lies in support of his agenda based pushing of the Sandy Hook hoax meme.    Alex Jones IS personally responsible for an increased stalking and harassment of Sandy Hook parents; his followers believing they "are the resistance" and taking violent actions.

Bryce Cuellar is just such a follower, convinced by Jones that he is the "resistance" with near horrific results, arrested a ew days ago for terroristic threats.  Luckily, he was caught before Jones has instigated him to kill someone.
http://sandyhookanalysis.blogspot.com/2016/08/sandy-hook-hoaxer-bryce-cuellar.html 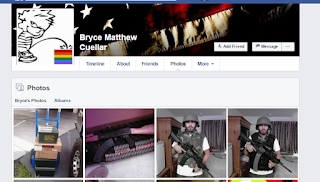 Often main stream media will erroneously refer to a hoaxer as a truther. The hoaxer is distinguished from the truther because a hoaxer manufactures and contrives their "evidence" and then pushes that fake evidence onto their audience; hoaxing that audience. Thus, the pushers of the fake evidence, such as Alex Jones are "hoaxers".

Alex Jones is, in fact, a hoaxer.  He is much worse than Hillary Clinton claimed in her speech, as can be easily  proven.

Alex Jones was called out and, desperate to maintain a semblance of credibility, published several videos repeatedly denying his well established hoaxer past.  Alex, thou doth protest much too much.

Alex Jones' denials are lies. He is a hardcore Sandy Hook hoaxer hoaxing his audience with contrived, debunked memes and claims.

This is a video is collage of comments made by Alex Jones during three different interviews with Wolfgang Halbig, the leader of the Sandy Hook Hoaxers.  The video also proves he pushes debunked memes and ridiculous claims.

Alex Jones always walks the tight rope of Sandy Hook, attempting to appear to be normal human; but he fails. His words speak for themselves, so lets put them out there.

Alex Jones proves he does, indeed, have a black, shriveled, evil heart.

SHORT URL to this article: http://bit.ly/2bYTzbw
Presented by SandyHookFacts.com at 11:02 AM

Alex Jones is a coward and he is going to get away with his lies, nobody is going to be mad at him