A current Sandy Hook related administrative FOIA appeal "to watch" is the Connecticut Department of Emergency Services vs the Freedom of Information Commission and Dave Altimari of the Hartford Courant.

This case has been covered by this blog extensively because Sandy Hook Facts has several Freedom of Information document requests that are pending before the Connecticut Department of Emergency Services  asking for many of the same exact items as the Courant (and more). Thus far, the Connecticut State Police either deny or completely fail to respond to all of our requests.  Connecticut's Freedom of Information Commission, to their credit, ruled in favor of Altimari and the Courant ordering the State Police to release the documents.


The Connecticut State Police are contending that the public has no right to the writings and documents found in the Lanza house during the investigation in the aftermath of the Sandy Hook School shooting.

Filed on September 11, 2015 the State of Connecticut, Department of of Justice is filing a motion to intervene.  The September 11, 2015 file date has some irony considering that is the date a lawsuit was filed against another individual, to be discussed in later blog post. 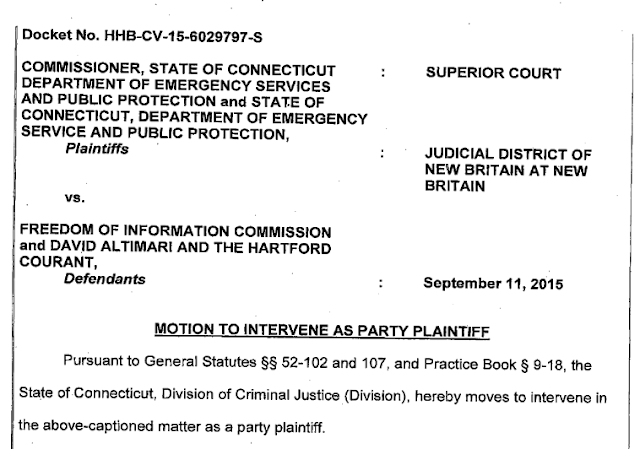 This is an interesting procedural development.   It can be anticipated that the full weight of Connecticut will be thrown behind the Connecticut State Police effort to keep the Sandy Hook shooter's information from public access.
Again, Sandy Hook Facts wishes Dave Altimari and the Hartford Courant every success as they fight  for the right of the people to access very important information to help us understand the individual who killed 20 first-graders and 6 teachers on December 14, 2012.

The people have a right to know.