The premise that needs debunking concerns the number of shell casings found in the bedroom of Nancy Lanza after the shooter, Adam Lana executed his mothing by shooting her four times in the head.

The primary  "pusher" of this hoax theory is "Insanemedia" and it basically goes like this: since the  search warrants and summary reports both state there were two casings and three live rounds, how could Nancy Lanza have been shot four times?


Insanemedia's "proof" is as follows: 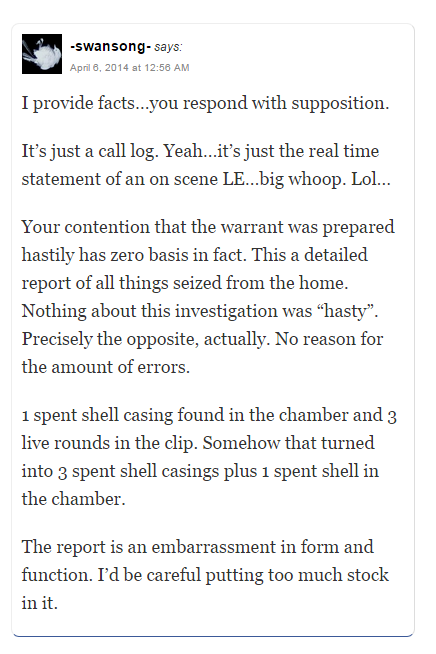 As with most hoaxer theories, this is a slight of hand trick by a dishonest writer that counts on the fact few people actually understand the warrant process or read the actual documents themselves.

If I could coin a new term, this is "meme seeding" by hoaxers, and completely lacks factual basis.

First, a brief synopsis of general search warrant procedures to help understand them.  Jurisdictions vary greatly; however, there is a constitutional minimum that everyone must follow.

Search warrants are issued by a magistrate upon a sworn affidavit of an officer establishing probable cause.      Probable cause will be a brief synopsis of the facts as understood by the swearing officer and a description of the place to be searched described with particularity.

The affidavits are typically written prior to a conclusive investigation (hence the need for a search warrant) and may contain errors.

The primary purpose of the affidavit is to provide the magistrate with enough evidence to establish probable cause.   Probable cause can be roughly understood to mean "51%  likelihood that a crime has been committed and this person did it/this place has evidence pertaining to that crime".  There is no law requiring "correct cause"; good faith is the measuring stick.

There were several search warrants issued during the investigation as found in the final report.

The search warrant return is not "conclusive" as it is usually filed before lab analysis or close evaluation.  Laboratory analysis of the seized evidence, if required, is done at a later time. Those findings would be reports filed as parts of other documents, as was the case with the "Sandy Hook Investigation".

The search warrant return commonly referred to as 010-020SWW @ 529PM (located in the compressed report) lists evidence seized and the items "at issue" in this debunking. 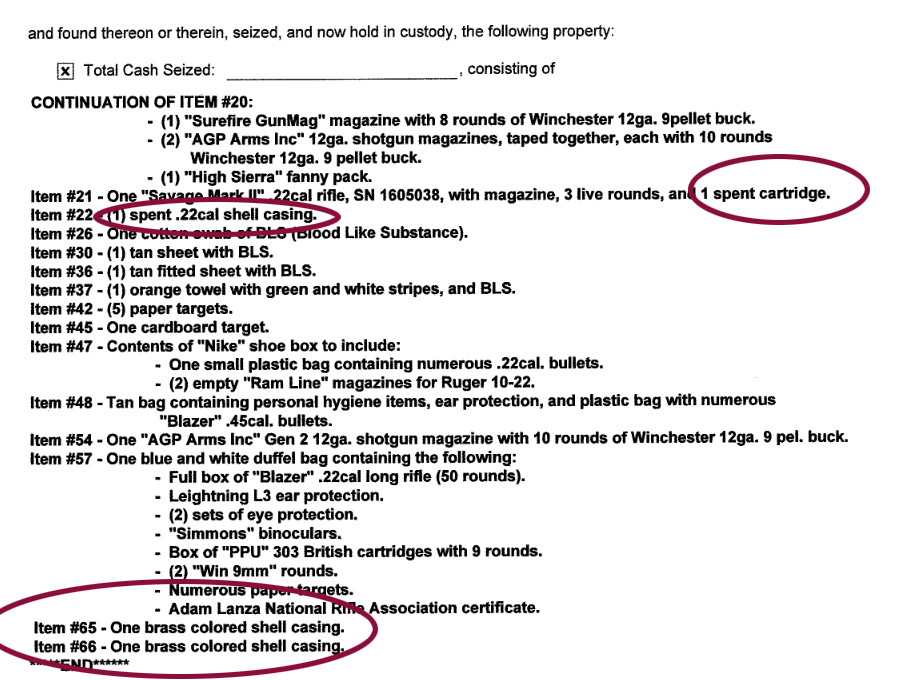 The rifle used was a bolt action .22 Savage Mark II rifle. This means that after firing a round, the shooter must manually eject the spent shell casing.  Here, the shooter did not eject the last round and it remained in the rifle when the shooter threw the rifle on the floor.

According to the report, the casings marked item #65 and #66 were found under the bed. These casings were not immediately visible upon entry into the room, and the scene descriptions bear that out.  The report shows the two casings, #65 & #66 as logged into evidence on Day 3 after Nancy Lanza's bed was disassembled.

Book 3 Document #00025726 is an evidence report. This document provides more detailed description of the items seized.  The items correspond to the evidence numbers as listed on the search warrant return. 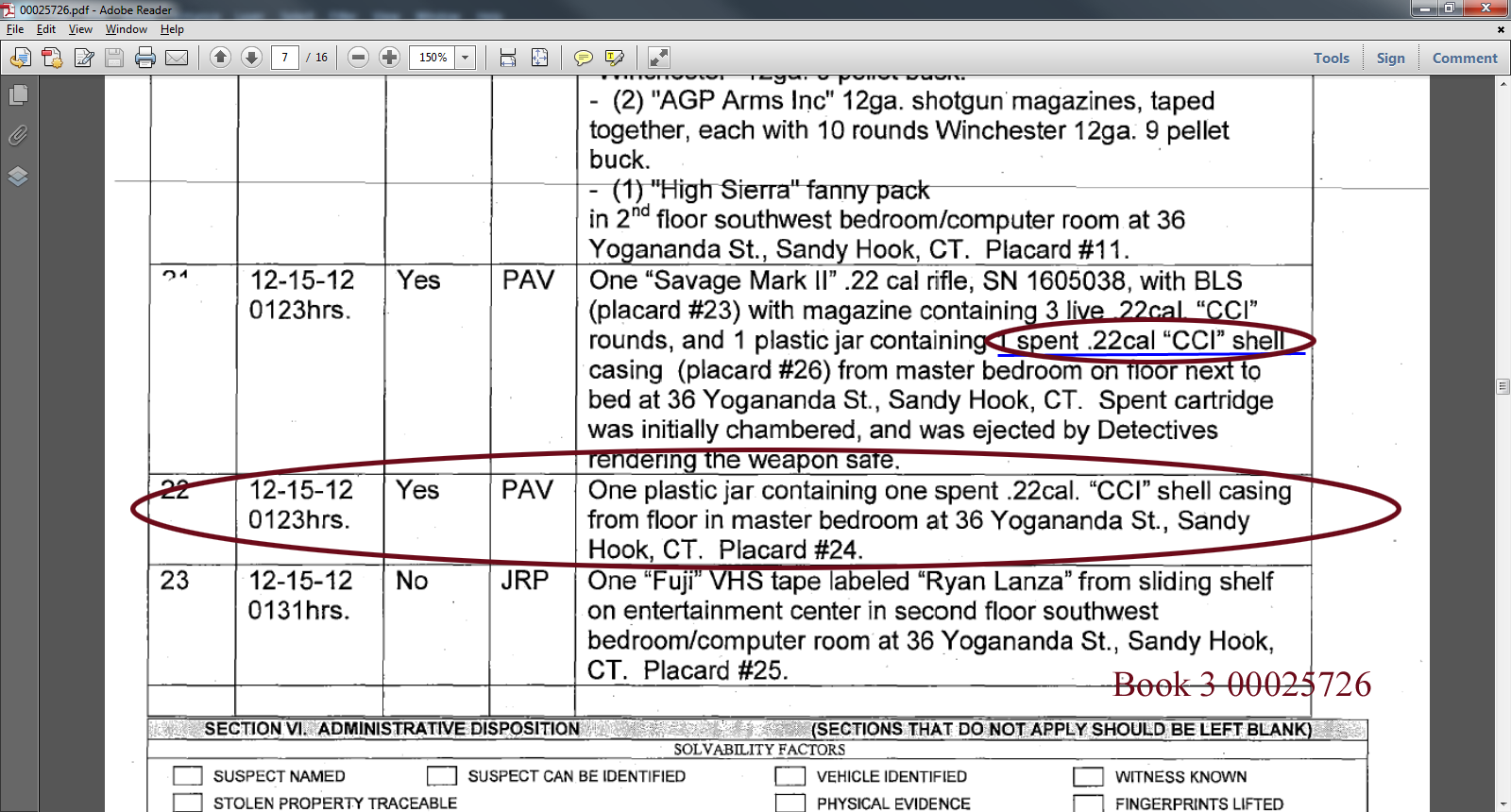 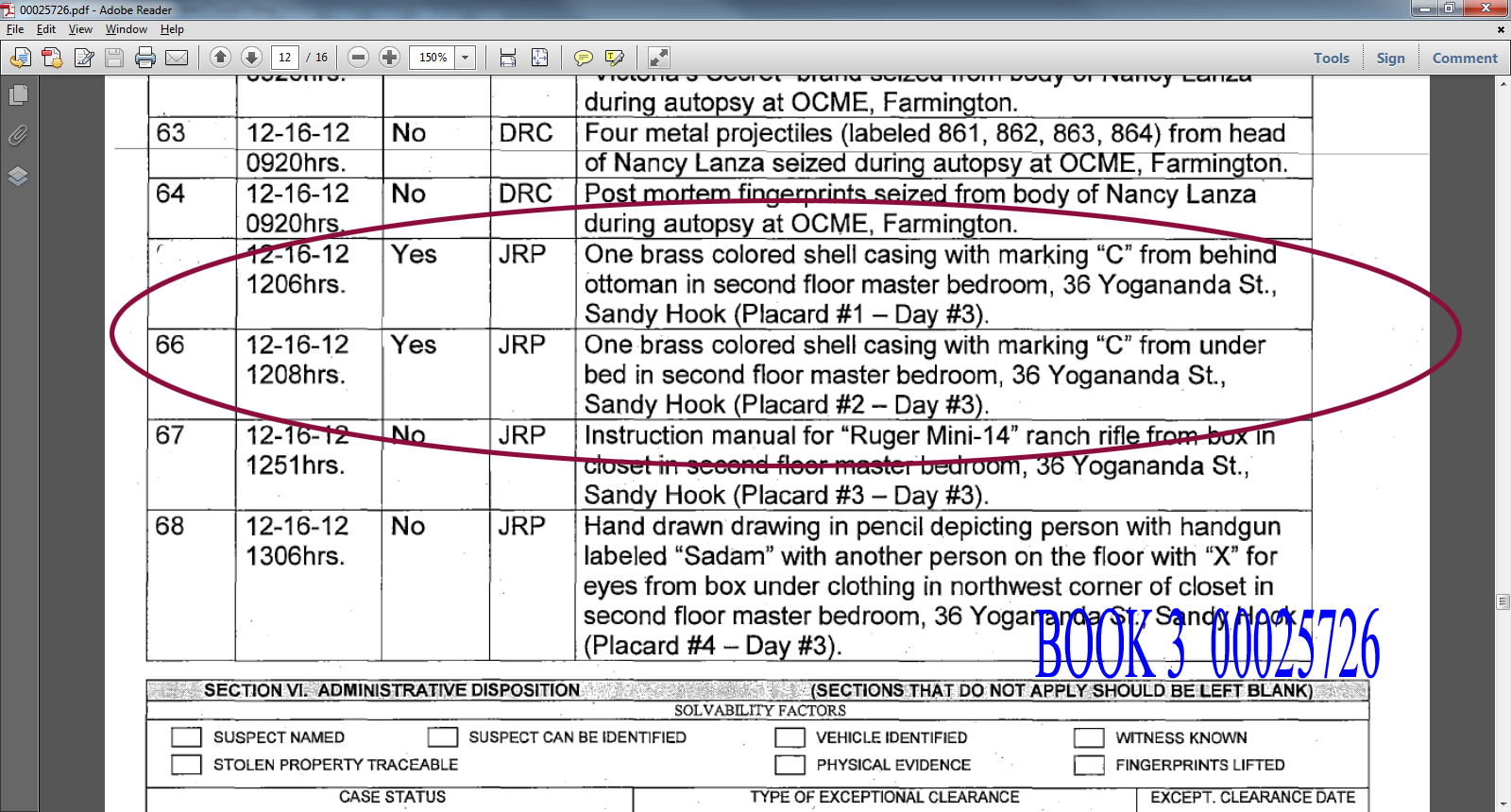 In addition to listing the rifle, magazine, 3 live rounds, and 4 spent casings on the search warrant return and evidence report, the investigators also photographed these items and documented those findings in photographic reports.   The placards listed in the evidence report correspond to the evidence placards in the photograph reports. 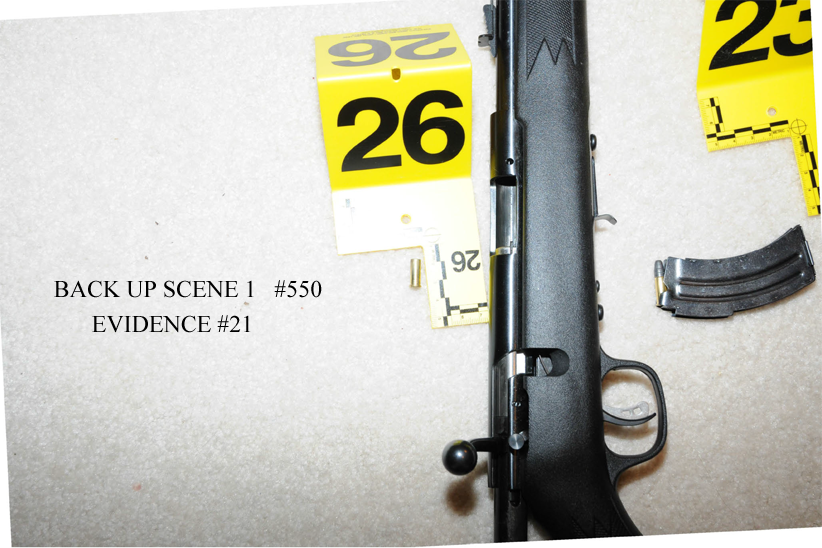 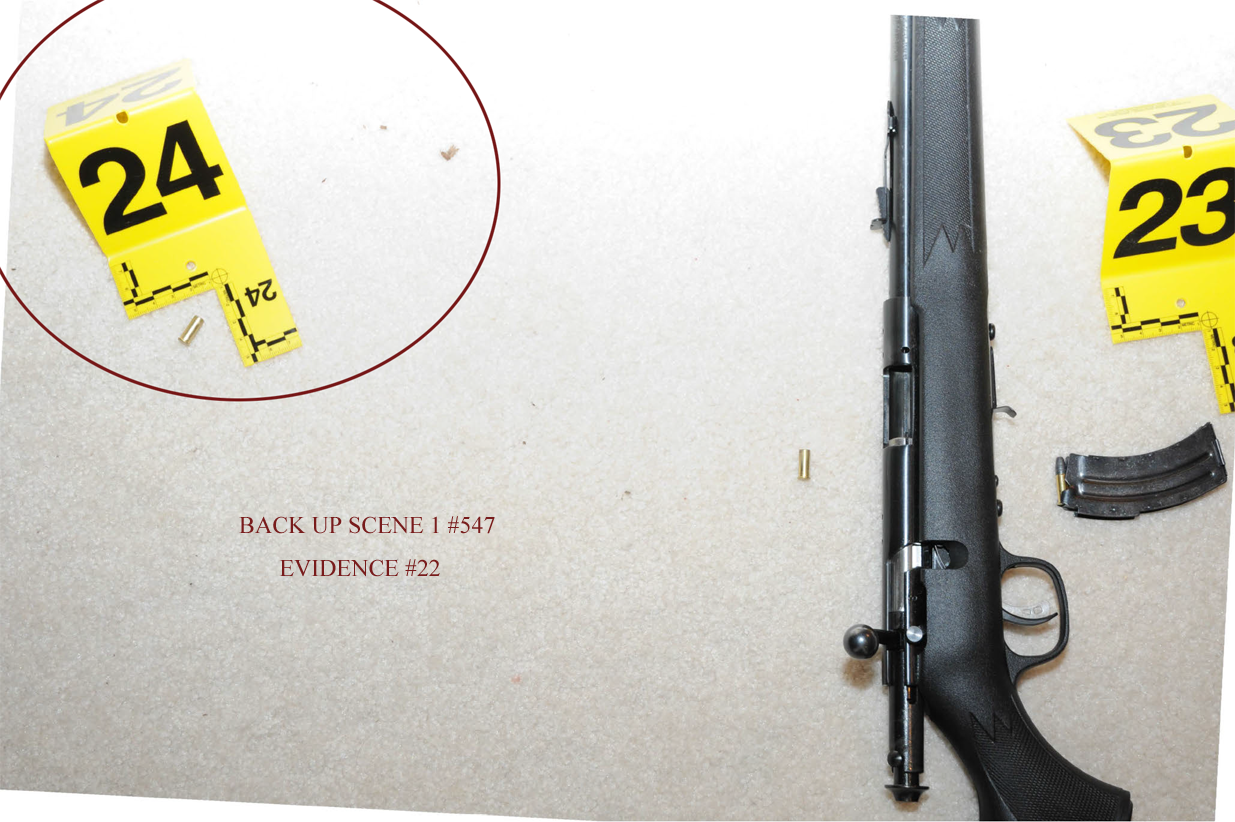 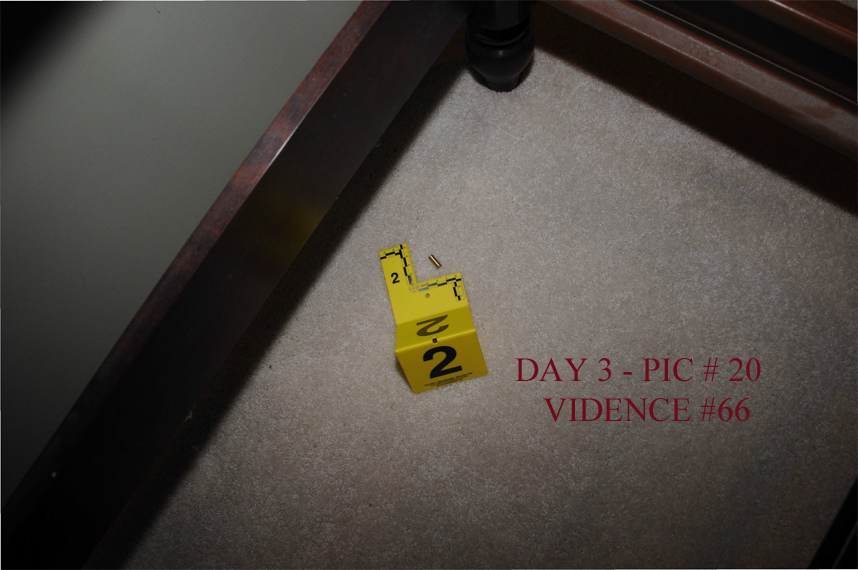 This document in Sec 12. 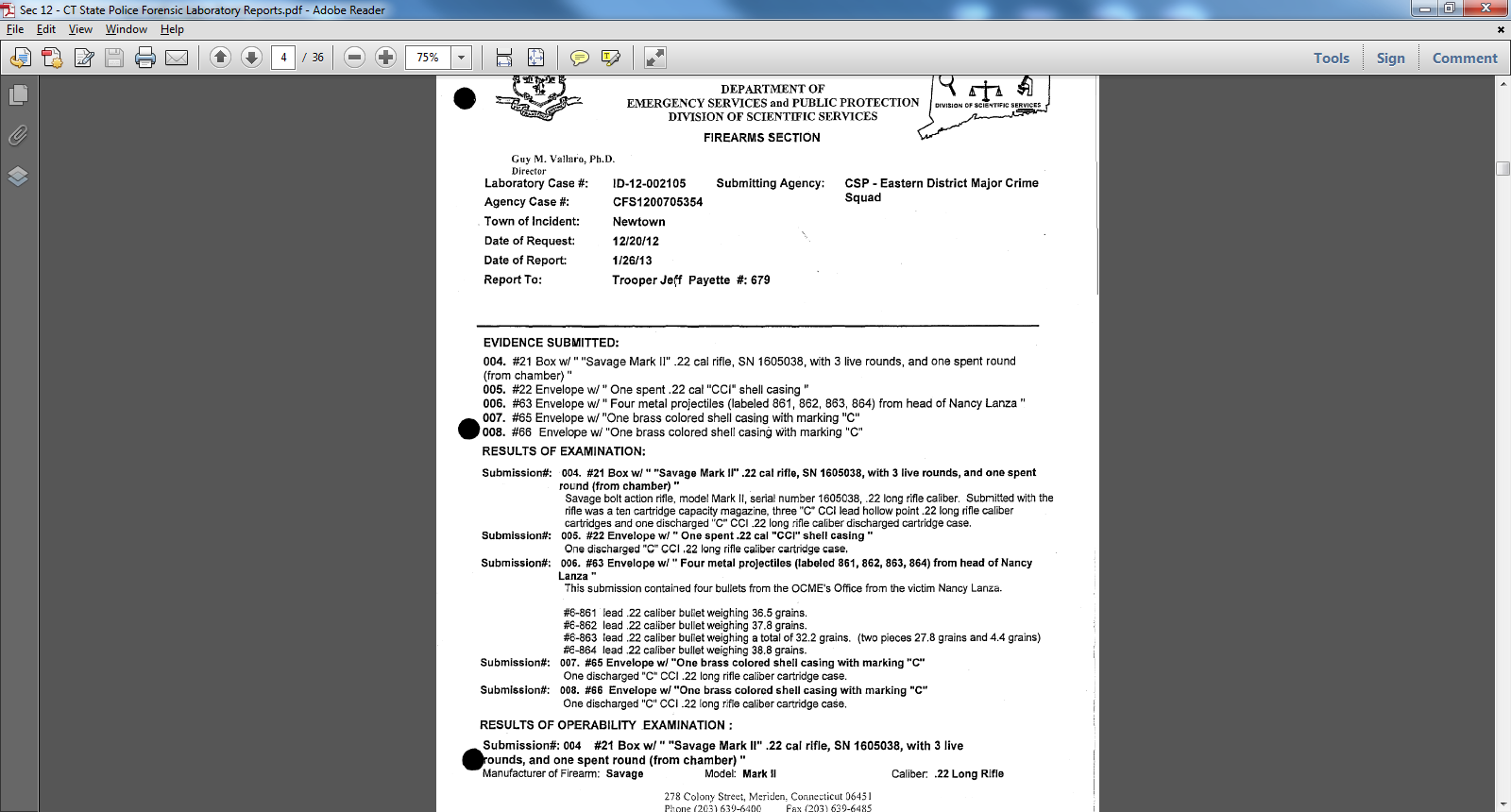 From the initial Search Warrant Return, to the evidence log, to the lab reports, items 21, 22, 64, and 65 clearly list 9 distinct, sepearate items.

Here the shells are all clearly described as CCI lead hollow point .22 long rifle cartridges or .22 cal CCI spent shell casings, respectively.  THere is no doubt as to the make and type of items described in items #21, #22, #65, and #66.


CCI is a well known brand of .22 round noted by the trademark "C" on the back of the casing, as described in the documents several times above.


The likely box for this ammo was on top of the ammo in the safe; however, there were several areas of the home where .22 rounds were kept. 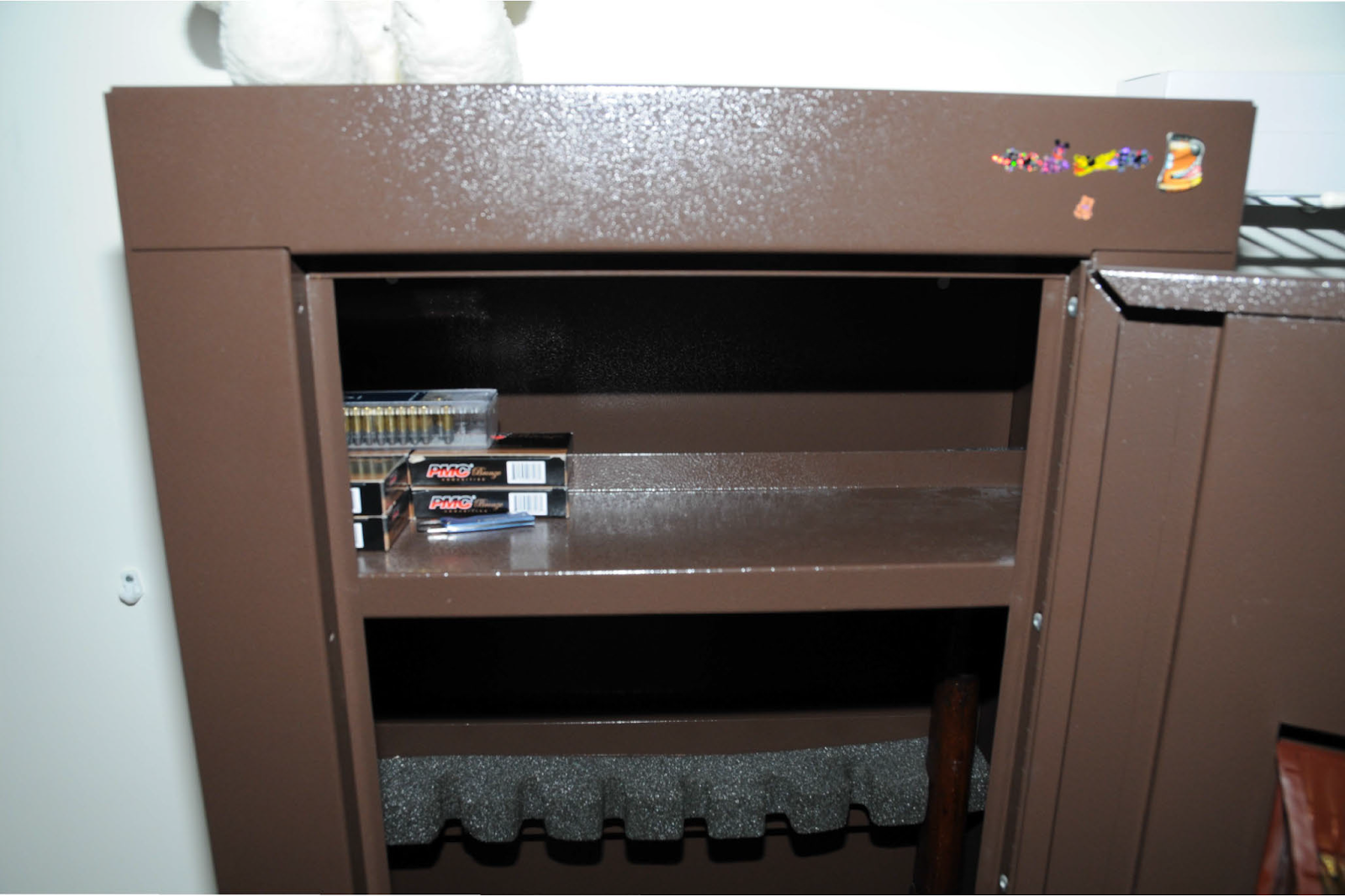 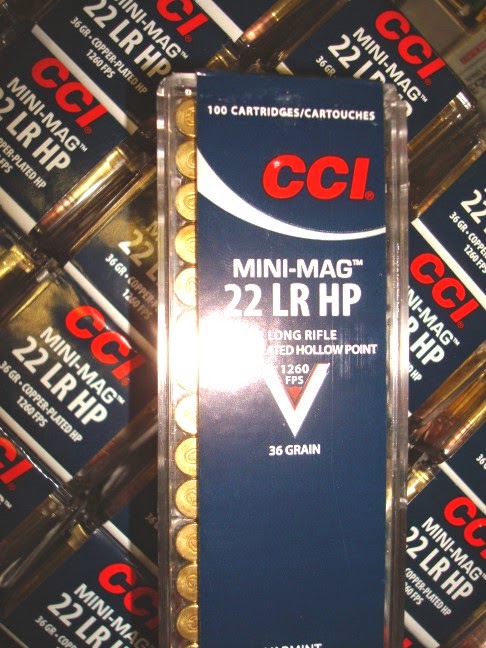 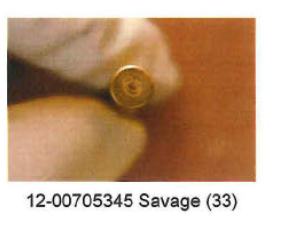 Page 41 of the final report provides more weapon information and confirms the lab analysis and autopsy findings, Nancy Lanza was shot by that Savage Mark II rifle 4 times in the head. 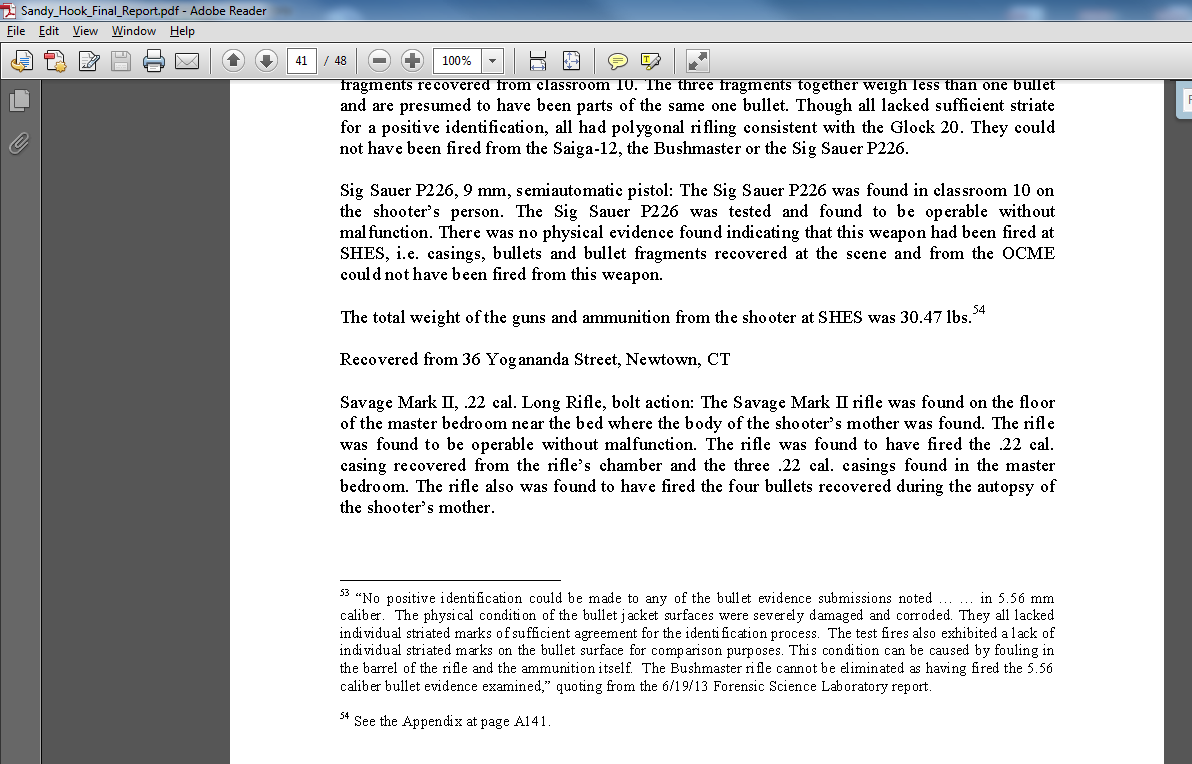 The Yoganada Scene description from the "Compressed Report" also details the seized evidence.    Consistent with the search warrant, evidence report, lab reports, and the final report, the nine distinct items are discussed: the Savage rifle, the magazine containing 3 live rounds, and a total of 4 expended shell casings: 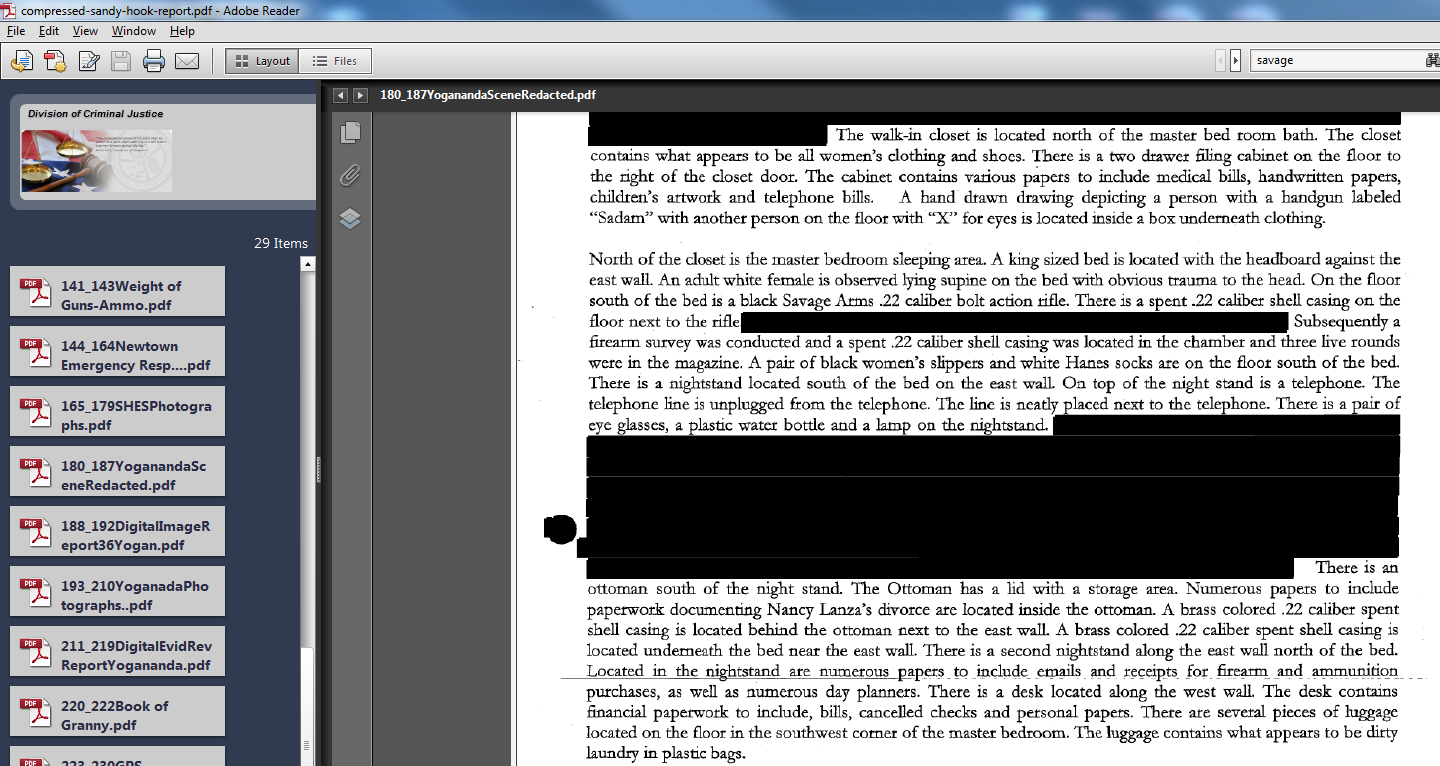 While it is possible to cherry pluck a single sentence or two from a report showing a summary of a specific finding, and thus declare there weren't four casings, to do so is disingenuous and purposely ignores the totality of the documentary evidence; documentary evidence that is overwhelming, consistent, and conclusive.


The documents discussed in this debunking may be downloaded from the final report:
http://cspsandyhookreport.ct.gov/


A few other screen shots: 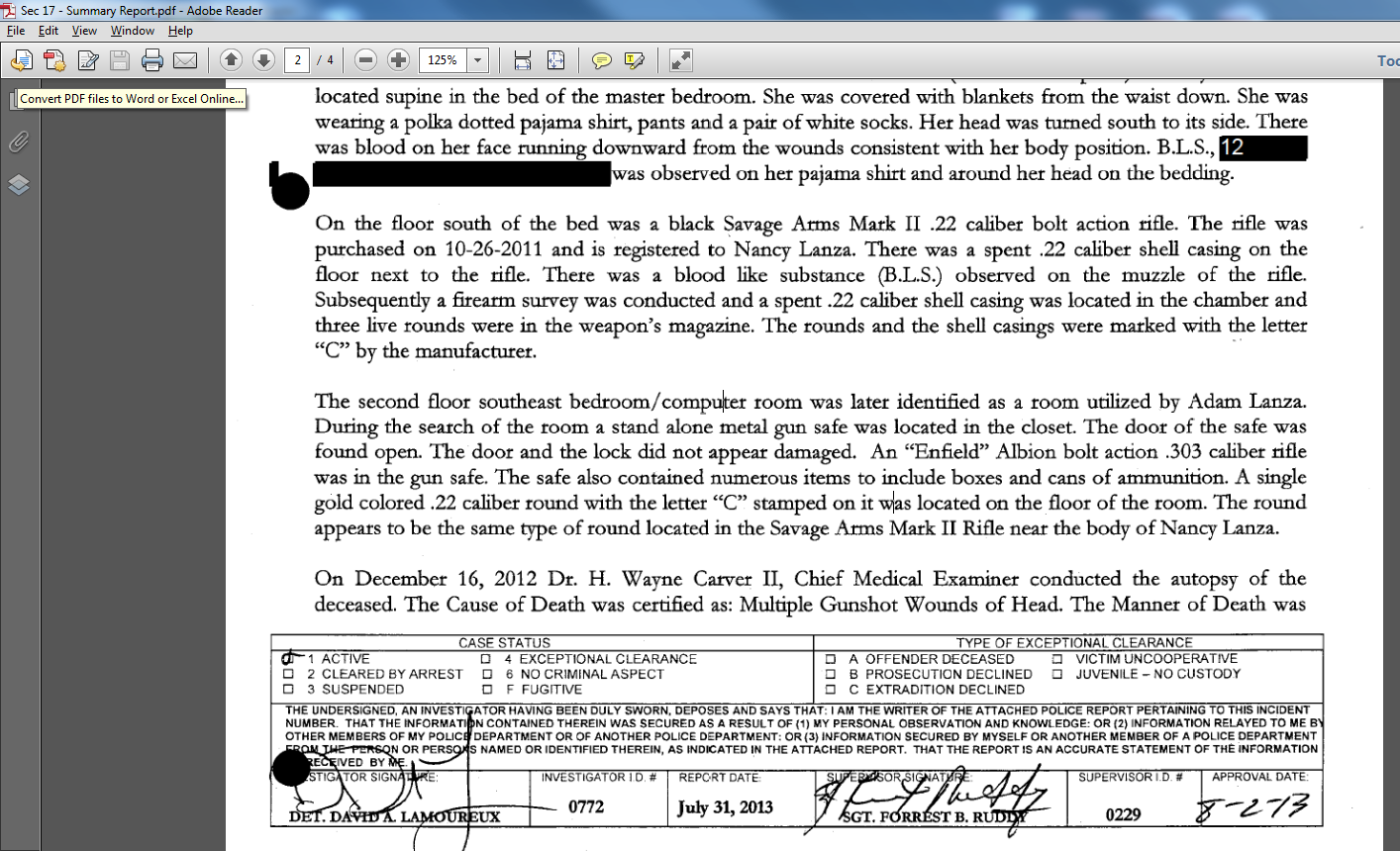 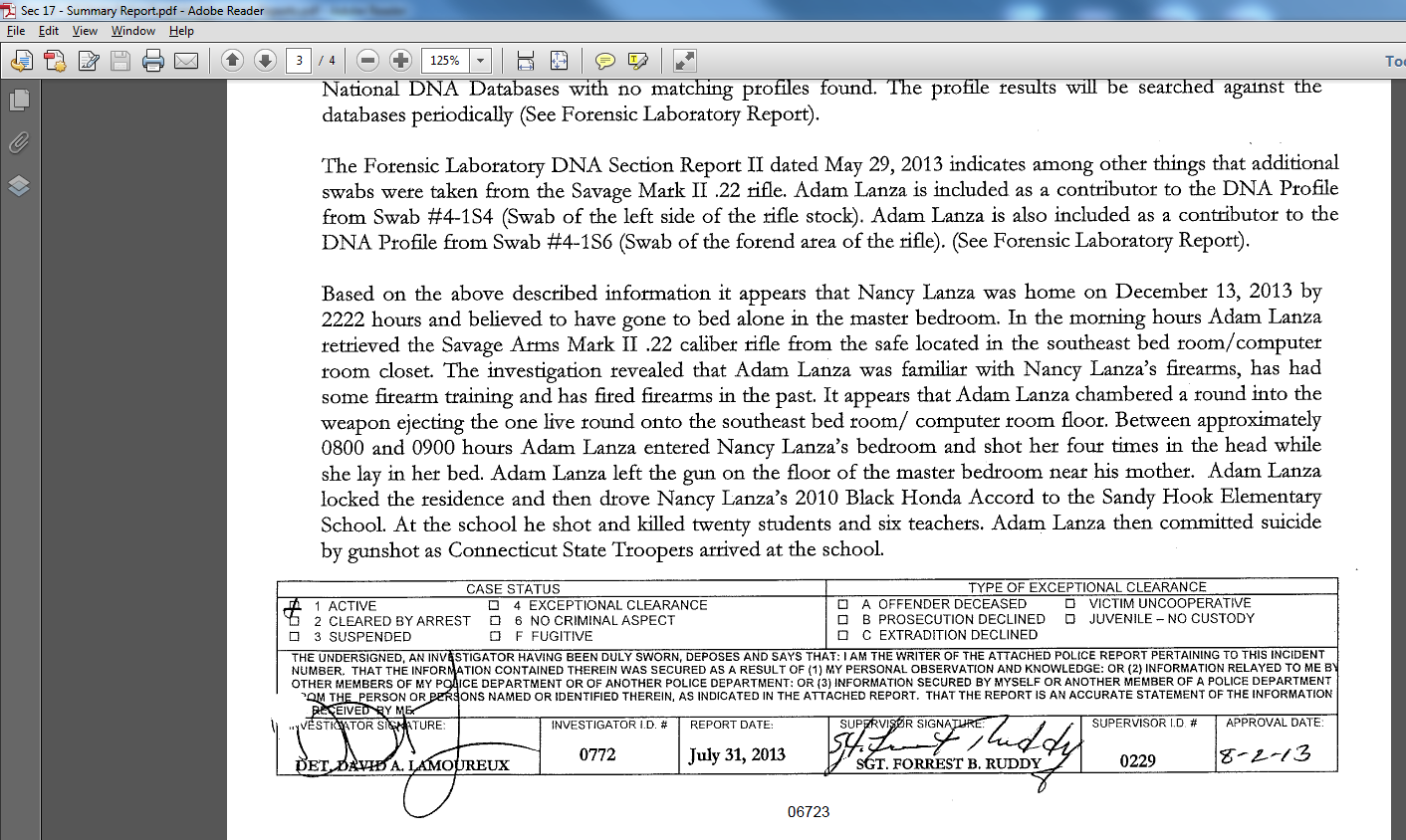