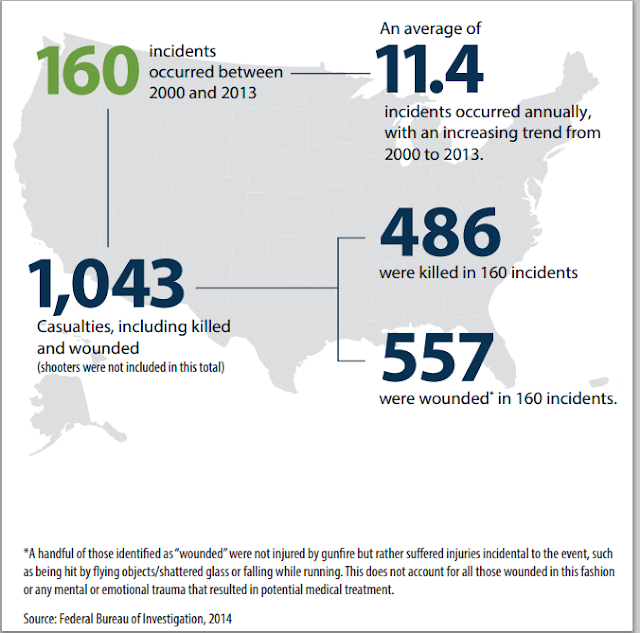 The just-released “A Study of Active Shooter Incidents in the United States Between 2000 and 2013” contains a full list of the 160 incidents used in study, including those that occurred at Virginia Tech, Sandy Hook Elementary School, the U.S. Holocaust Memorial Museum, Fort Hood, the Aurora (Colorado) Cinemark Century 16 movie theater, the Sikh Temple of Wisconsin, and the Washington Navy Yard, as well as numerous other tragic shootings. Here are some of the study’s findings:
- Active shooter incidents are becoming more frequent—the first seven years of the study show an average of 6.4 incidents annually, while the last seven years show 16.4 incidents annually.
- These incidents resulted in a total of 1,043 casualties (486 killed, 557 wounded—excluding the shooters).
- All but six of the 160 incidents involved male shooters (and only two involved more than one shooter).
- More than half of the incidents—90 shootings—ended on the shooter’s initiative (i.e., suicide, fleeing), while 21 incidents ended after unarmed citizens successfully restrained the shooter.
- In 21 of the 45 incidents where law enforcement had to engage the shooter to end the threat, nine officers were killed and 28 were wounded.
- The largest percentage of incidents—45.6 percent—took place in a commercial environment (73 incidents), followed by 24.3 percent that took place in an educational environment (39 incidents). The remaining incidents occurred at the other location types specified in the study—open spaces, military and other government properties, residential properties, houses of worship, and health care facilities.