UPDATE - 11/22/16
Police sources in Connecticut have independently confirmed that Jonathan Reich is in custody in New York's Prison system until an extradition hearing on 12/19/16.

This confounds Sandy Hook Facts; why would Reich not waive extradition and simply go handle his case?

If Sandy Hook Facts get's word Reich has waived extradition and gets a court date in Connecticut, we will update!

It appears Reich will do about a month in Jail before even getting to Connecticut where justice can be served.

This confirms the opinion that Jonathan Reich, following the legal advise of Wolfgang, Tony, and Zeeroe3, will likely do more jail time in New York than had Reich  followed SandyHookFacts.com's sage advice to stop running and simply handle his case in Connecticut.

Here is an Sandy Hook Justice agent and "friend" of Jonathan Reich bragging that Reich failed to comply.

In lieu of Reich simply doing what everyone does when they find themselves in a legal mess, ie, go to court and handle their case, Reich was taken in by Tony Mead and Wolfgang Halbig. Wolf and Tony  molded Reich into the perfect show pony for their cause; at great expense to Jonathan Reich.


For an example of someone who DOES NOT listen to Tony or Wolfgang, millsmost.  millsmost took care of his case. Did you see millsmost making web pages about his judge and prosecutor? Of course not.

Tony, on the other hand, encouraged Jonathan Reich to do the stupid thing; to hide out with a $100,000 warrant for his arrest. 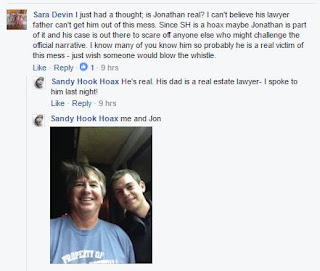 While attacking the son of Reich's prosecutor.  Great work, Tony! Will you put money on Riech's books at Riker Island prison system?


The Sandy Hook Justice crew deciding they would mold Reich into a fundraising show pony was the beginning of Jonathan Reich failing diversion, filing idiotic motions, encouraging failing to appear or comply with court, while creating and sharing websites and blogs mocking the judges and the prosecutors (and their families!). 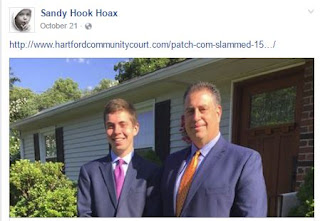 Not a single hoaxer out there told Jonathan Reich, "You know, you might want to go take care of that warrant."  Why not?

Now Reich could possibly sit in the slammer until a extradition hearing on December 19th.

By the way, there is an unconfirmed report that the Marshals came to Reich's house on a status check and Reich mouthed off.  This is how confident  Reich was in Zeeroe3's advice  I'm guessing he's not mouthing off at the moment.

Great Job Wolfgang, Tony, Zeeroe3 and Cory! Great advice! Maybe you guys should fire off a couple of emails to every press agency on the planet. I'm sure that would help.

Maybe Donald Trump will help?   How about Alex Jones? Didn't Alex promise to start looking into this?Where is Alex and his white horse?

A very special congrats to Wolfgang who apparently gets to pocket all those "Jonathan Reich class action lawsuit" donations while Reich sits in prison in New York over a Connecticut case.

Next step after extradition would be trial in Connecticut; although, if I were a betting man, I would guess Reich is going to cop a plea.

Of course, at trial, the ridiculous Sandy Hook Justice crew promises to "Bring down the US Government" with Reich's case.  Ha.  Delusional much?

I look forward to the trial.   I'm going to be very disappointed if Reich pleads out or if Sandy Hook Justice cannot fulfill their promise to  use the trial to prove Sandy Hook was a hoax. After all, Wolfgang has promised secret witnesses and evidence!

This should be great!

Golf clap for Wolfgang, Tony, Zeeroe, and Cory. A fine job for your "friend".
Your legal prowess amazes. With friends like you four...well, you know the rest. 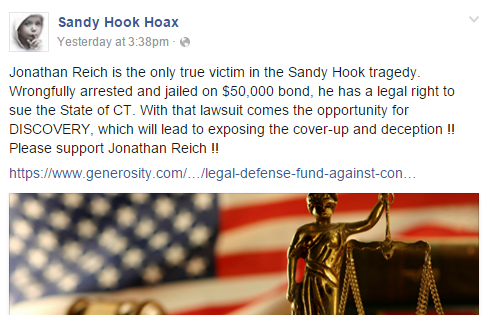 Presented by SandyHookFacts.com at 11:23 AM

Is there an update on his lawsuit against Patch?

They are in the briefing stage of Defendant's Motion to Dismiss.
I updated after Plaintiff's response here:
https://sandyhookanalysis.blogspot.com/2016/11/jonathan-reich-vs-patchcom-lawsuit.html

We should know something more about the status next week and a hearing is upcoming.

let's hope that Reich is held for psychiatric observations.

So, how long has this guy been in jail & what did he do exactly?