Alex Jones claimed the "Wayback Machine" is his "smoking gun proof of cover-up".  Alex Jones is correct about one thing; the Wayback Machine is the only (so-called) "evidence" the hoaxers have that the Sandy Hook was not in operation.  Other than that, Alex Jones uses deceptive tactics to hide the real links to Sandy Hook School archive from his viewers.

In this episode of Sandy Hook Facts, I debunk hoaxer Alex Jones and prove the Wayback Machine is smoking gun proof the school was open.  I also prove Alex Jones source was none other than Jim Fetzer and the Jones had to have engaged in intentionally misrepresentation in order to share Jim Fetzer's theory as "smoking gun proof".  Alex Jones is intentionally slapping Sandy Hook families in the face and openly mocking them.

Simple question
How can Alex Jones want to be considered as real news when he calls debunked Jim Fetzer tripe "smoking gun proof of cover-up"?  This proves Alex Jones is FAKE NEWS.

The Source - Jim Fetzer
Alex Jones' source was a Jim Fetzer article. How can Alex Jones publish Jim Fetzer tripe and expect not to be categorized as Fake News.
http://www.veteranstoday.com/2015/05/01/newtown-school-board-the-newtown-bee-complicit-in-the-sandy-hook-hoax/

Those articles were before Jim Fetzer, James Tracy, and Wolfgang Halbig authored "No One Died at Sandy Hook"; debunked as fiction and misinformation by Sandy Hook Facts many times, including here:
https://www.youtube.com/watch?v=R0Vse-FLwLw


In this episode, I prove that Alex Jones used deception to hide the fact he presented the wrong link for the Sandy Hook School for the period of the shooting. Using the wrong link, he claimed the Wayback machine showed no internet activity.

By using the wrong link, he claimed this to be Smoking Gun Proof of cover-up because there was no Internet Traffic at the Sandy Hook school Website in 2012.

In doing so, Alex Jones copied a meme created by Jim Fetzer and thus, proves that Infowars has as much credibility as Jim Fetzer. ; ie NONE.  Info wars is proven to be FAKE NEWS using deceptive tactics and pushing Debunked False memes to intentionally mislead the public with FALSE information under the guise of "Smoking Gun Proof".

This is proof Alex Jones is a two-bit hoaxer grief troll, who intentionally harms Sandy Hook families by presenting debunked tripe as fact.

Crisis Actors Guild
Why “The Most Compelling Evidence” In “Nobody Died At Sandy Hook” Is A Total Bust
http://www.crisisactorsguild.com/2016/05/12/why-the-most-compelling-evidence-in-nobody-died-at-sandy-hook-is-a-total-bust/

Wayback Machine Web Archive Links:
These are the links dishonest hoaxers such as Jim Fetzer and Alex Jones don't want you to know about.

Newtown disallowed Wayback Machine crawling for their entire distrct from 2008-2010 and they they changed servers for their schools to SchoolDesk.net. 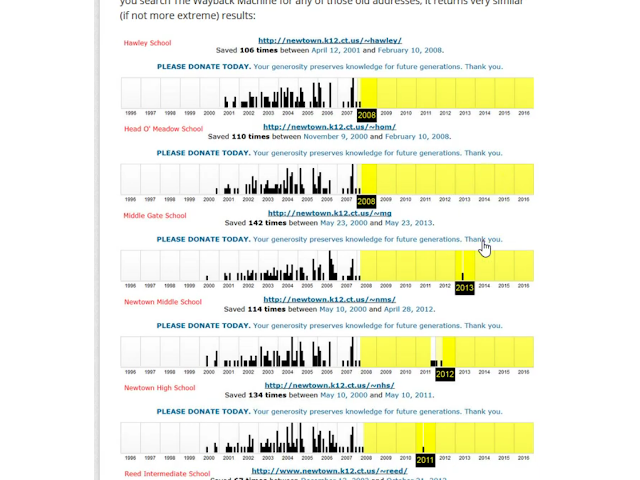 How do disallow Wayback Machine:
http://www.crisisactorsguild.com/2016/05/12/why-the-most-compelling-evidence-in-nobody-died-at-sandy-hook-is-a-total-bust/


How can I have my site’s pages excluded from the Wayback Machine?
You can exclude your site from display in the Wayback Machine by placing a robots.txt file on your web server that is set to disallow User-Agent: ia_archiver. You can also send an email request for us to review to info@archive.org with the URL (web address) in the text of your message.

And what is a robots.txt file? From Wikipedia:


The robots exclusion standard, also known as the robots exclusion protocol or simply robots.txt, is a standard used by websites to communicate with web crawlers and other web robots. The standard specifies how to inform the web robot about which areas of the website should not be processed or scanned.

Sure enough, we can see that on June 4th, 2008, the webmaster for Newtown’s public schools added the following to their robots.txt file:

And what do those two lines do?

This “User-agent: *” means this section applies to all robots. The “Disallow: /” tells the robot that it should not visit any pages on the site.

I've presented this same argument/evidence to HoaxTards MANY TIMES...they usually just call me a "shill" and tell me, "there will be no saving you"...or something irrelevant like that.

Facts ARE Kryptonite to HoaxTards.