"This is a real no-brainer. I don’t even have to measure anything to tell you these are not the same girl.  I can see at a glance how far off they are in terms of appearance. And age has nothing to do with this comparison at all. The face lengthens and teeth can change with age, but those are irrelevant in this comparison." - Expert Joelle Steele

This information is being re-blogged from CrisisActorsGuild.com.  To read the full article, please visit- 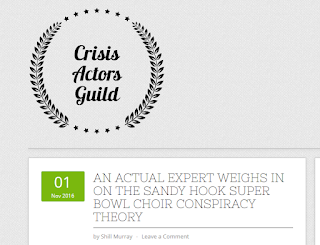 Shill Murray, author of "CrisisActorsGuild.com hit another homerun when he reached out to a real facial recognition expert to have her weigh on the hoaxer claim the Avielle Richman is actually younger photos of a teenager living in Newtown.  The results were as expected.  Obviously, the two girls are not the same.

The hoaxers were soundly debunked.

Who is this expert?
Joelle Steele is an expert who comes with 30 years of experience and literally wrote the book on facial comparisons.


The stalking of a child
The Sandy Hook Hoaxers, led by hoaxer leaders Wolfgang Halbig and Tony Mead, have caused their followers to torture a Newtown family based on a theory originally offered by Youtubers that Newtown victim Avielle Richman was "played" by a child who lives in Newtown.  The teen-aged girl and her family are relentlessly hounded at the their homes, work, and school.

See coverage of this issue - "Hoaxers double down on gangstalking"
http://sandyhookanalysis.blogspot.com/2016/09/hoaxers-double-down-on-gangstalking_53.html

The organized gang stalking of this child has really exposed a depraved side of the already nefarious hoaxer cult.

James Appleton, an video expert out of Dallas, Texas decided he would take Halbig money to do a ridiculous comparison of mostly "Avielle vs Avielle" photos.     For $700, this alleged expert compared photos prepared by Tony's hoaxers such as this one:

Obviously the hoaxers took a photo of Avielle and flipped it. Adding to the idiocy, they photoshopped both girls' name to the forehead.  This tomfoolery was apparently lost on the befuddled "expert"  Appleton.

With easy money in hand, Appleton promptly declared the girls to be the same and pocketed the cash.

When Appleton learned he had effectively declared a deceased Sandy Hook victim to be a living, Newtown resident, he issued an apology - but the damage was done. Dallas video expert James Appleton was was now the unwitting clown posted dumped center stage of the Halbig fund raising circus.

First - it doesn't take an expert to see that the girls are different. While they have a similar appearance; that is about it. Once you look closely, they are obviously not the same child.  But what did the real expert has to say.

When I contacted Joelle, I introduced myself as a blogger who spent a lot of time researching the Sandy Hook Elementary School massacre. I wasn’t sure if she was aware that the shooting was the subject of a number of conspiracy theories (most people aren’t), so I explained the situation, and the Super Bowl angle in particular, to her. This was done in order to avoid any legal and/or ethical issues. And while I made it clear as to where I stood on the subject, I told her that I wanted her honest, unbiased opinion, and that I would gladly pay her for it up front. Joelle wrote back and said that she was willing to do the work, but would need at least three high-quality photographs of each subject so that she could project them up onto an eight foot screen for analysis, as is her standard procedure. In return, I sent over the absolute best photographs that I could find, for her approval. Shortly thereafter, Joelle wrote back. This is her reply, in its entirety: 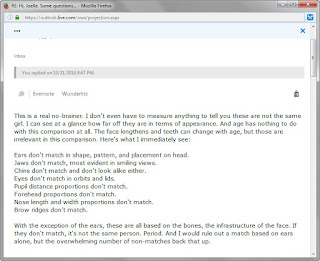 From: Face Comparisons
Subject: RE: Hi, Joelle. Some questions…


This is a real no-brainer. I don’t even have to measure anything to tell you these are not the same girl.  I can see at a glance how far off they are in terms of appearance. And age has nothing to do with this comparison at all. The face lengthens and teeth can change with age, but those are irrelevant in this comparison. Here’s what I immediately see:


Great work CrisisActorsGuild.com! And a big thank you to Joelle Steele for her assistance.
Presented by SandyHookFacts.com at 8:07 PM

This will run the usual course of denial...Fake expert...lies...blah...blah...blah....HoaxTards can't be bothered with the truth or the details. "Regardless, it was hoax!!!"