If Halbig is being truthful in claiming his own Lake County Sheriff has declared Halbig a "mental patient", I personally am not sure where that insanity would end and the crisis actor performance we saw on August 26th begins." -- Sandy Hook Facts

L. Kay Wilson and Wolfgang Halbig appeared before FOIA Commission's Hearing Officer Perpetua to once again argue versus the Connecticut State Police for the release of Dash Cams and Reports not released with the Sandy Hook Final Report. The second hearing of FIC 2015-786. The first hearing was heard Feb. 18. 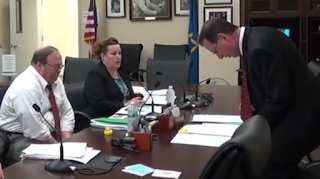 Mert Melfa streamed the hearing via Facebook and posted the hearing on his Youtube Channel, an effort that is truthfully appreciated, so thank you to Mert Melfa.

Prior to this hearing, Mr. Perpetua had all but made it clear he would rule in Halbig's favor, so it appears L. Kay Wilson and Halbig decided they would take the opportunity to put their pursuit of argument in this case on hold and put on a little show. 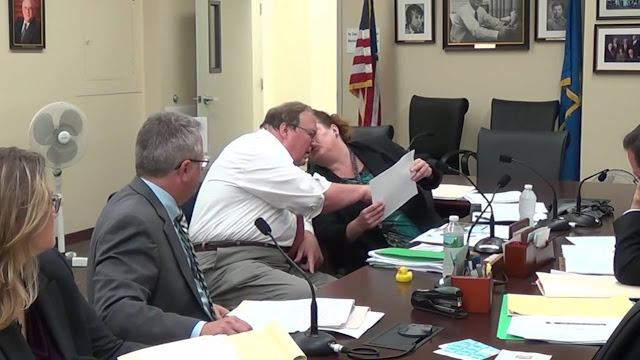 Halbig announced he had a surprise coming the night before the hearing; he did not tell us what that would be.
https://www.youtube.com/watch?v=wtQOuwQ7pQw 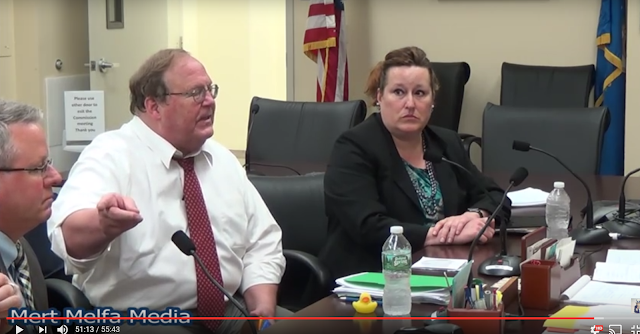 Halbig delivers a fantastic performance!
Halbig and Wilson began their Best in Show with props.  Halbig was all mic'd up by Mert. Halbig prominently displayed one of his famous rubber duckies on the desk in front of him,  fiddling with his duckie often, and often facing it directly towards Mert Melfa's camera. 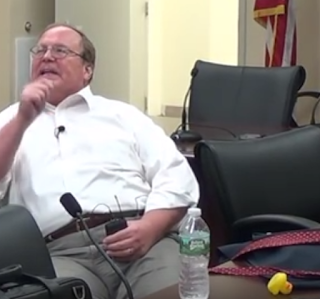 For another prop, Halbig appeared to be demonstrating his contempt for Sandy Hook School victims by blowing his nose on a green shirt. Eye roll on that prop. 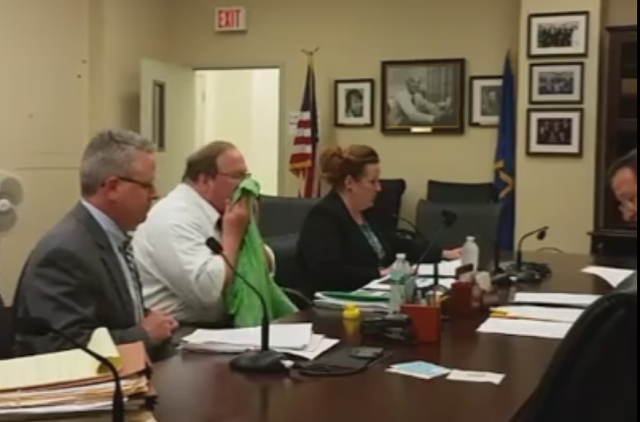 It seems very similar to something like this, although we did not get a clear view of the logo. 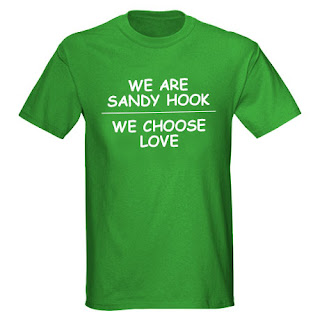 It's 2014 again
Halbig and Wilson decided that, instead of focusing on the matter at hand, they would  pretend to attempt a backdoor re-litigation of  their failed 2014's case versus Newtown.

Halbig previously appealed the Newtown decision. Halbig voluntarily dismissed his own appeal October 2015 when Kay Wilson withdrew the action. That decision is final, by their own hand.

Personally, I do not believe Wilson or Halbig believed this discussion would be allowed by Hearing Officer Perpetua.  The Newtown case was two years ago and Newtown was not even present. Perpetua has demonstrated he is a no-nonsense hearing officer.  It's obvious that it would not be allowed.

As would be expected, the Commission did not allow the duo to discuss the 2014 Newtown case. The attempt set the stage for Halbig's planned big finale. 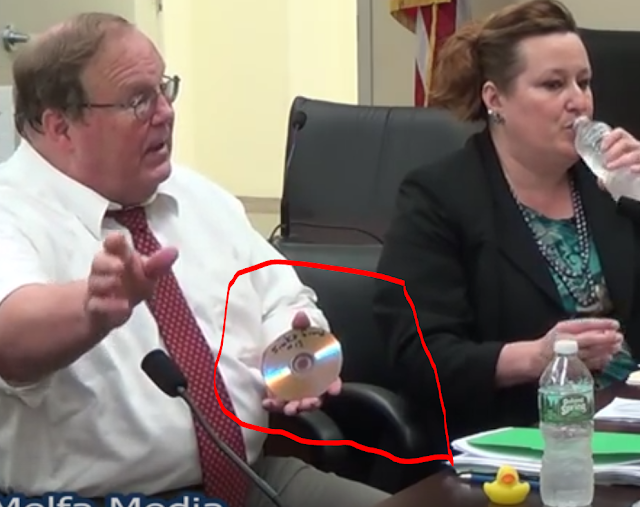 Stage left, L. Kay Wilson once again pretended they did not receive Lt. Sinko's Dash Cam, even while Halbig holds a copy in his hand recieved via Newtown FOIA.as proven in this video "Wolfgang Halbig and Kay Wilson Sinko Dash Cam WHOPPER":

Wilson again pretended she believes the CSP has a different copy of a "Sinko Dash Cam".  How do we know she is pretending? Because she has read the report on the Dash Cam, or she reasonably should have. Even if Wilson did not do due diligence, they read every word this blog writes and watch every video made, and their theory has been over debunked here.


Halbig's Sinko DVD
The files on the Sinko DVD's in possession of Halbig and Wilson for Sinko's dash cam are:

Sandy Hook Facts is in the possession of a copy of Halbig's DVD.

The DVD has seven video files and a html page showing there was a recovery error with the documents when they retrieved the file from the dash cam.

Thus, they are quite obviously the same.  The show must go on.

The Final Report shows that the DVD in the possession of the State Police also has the name "Mulhall":

So the bottom line is, if L. Kay Wilson and Wolfgang Halbig are successful in wresting another copy of the DVD from the CSP, it will be the exact same as they already have, as they know.

The times of the video are the same. The name is the same. The real winner is the wallets of Kay Wilson and Wolfgang Halbig as they rake in donations and hourly rates. 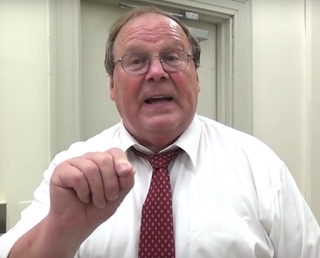 Halbig and Wilson also make various claims about about the Dash Cam displaying "no names", no GPS, etc. They have no factual basis for these claims and the claims appear completely contrived and / or irrelevant, not to mention debunked since June 2015, a video Sandy Hook Justice crew acknowledged viewing.

Further, numerous examples of Police Dash cams can be found online, with differing name/time stamp/GPS set up. It's a gimmick.
https://www.youtube.com/results?search_query=police+dash+cam

Comedic interruption by Hoaxer Maureen Crowly
Maureen Crowly, a well known hoaxer, played her part in the show, raising her her hand to talk at the hearing.  Perhaps she was asking to go to the restroom.  Whatever the reason, she was completely out of order.

The hearing officer would have none of it and told her to put her hand down and that she was not welcome to speak.  Crowley then came up to L. Kay Wilson and whispered nonsensically (perhaps intending to appear completely insane). Wilson shooed Crowly away. 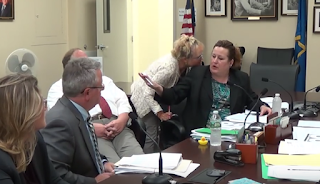 This was not Crowley's first uncontrollable outburst.  At one hearing she began screaming that she was "threatened by the Connecticut  Mafia for questioning Sandy Hook!". 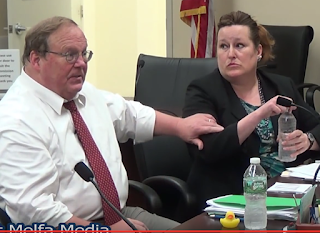 Wolfgang's pseudo-dramatically "suspended" L. Kay Wilson and attempted to call her as a witness in the Newtown case.  When this was denied, because that was not the case at issue, Wolfgang threw a tantrum.

Wolfgang breathlessly claimed he needed the FOIA Commission to release the Sinko dash cam because his family is in "imminent danger" The facts constituting an "imminent danger" are not clear; nor is it clear how Sinko's Dash Cam could offer protection from this alleged perception of imminent danger.   Halbig is literally ridiculous, in this writer's opinion. 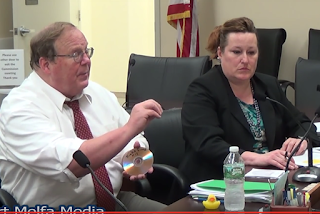 Halbig then stood up, packed up his rubber ducky, and declared he was "not leaving these offices" and Perpetua could "put him jail".    "My family's in danger and you guys are playing games!", Halbig declared, presumably discussing the mythological dash cam danger monster. 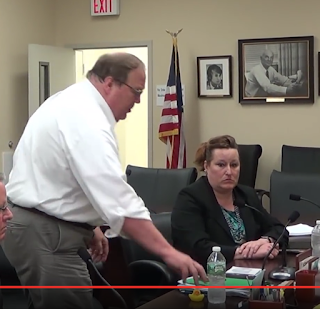 The hearing officer adjourned. And Halbig staged a sit-in, claiming he would not leave unless arrested.  He stomped out and back in. 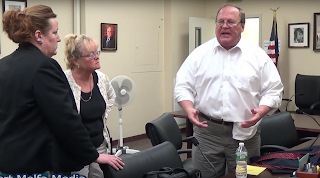 The charade sit-in lasted about a minute, then Crowley made another cameo, hugging Halbig and giving him a birthday card [and check, no doubt]. 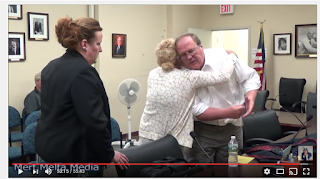 After his attempt at setting a record for the world's shortest sit-in, he packed up his rubber ducky again and went home.  His viewers would not get to see Halbig arrested this day. 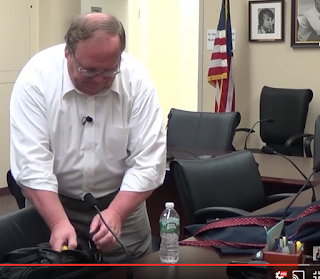 Are you kidding me right now? 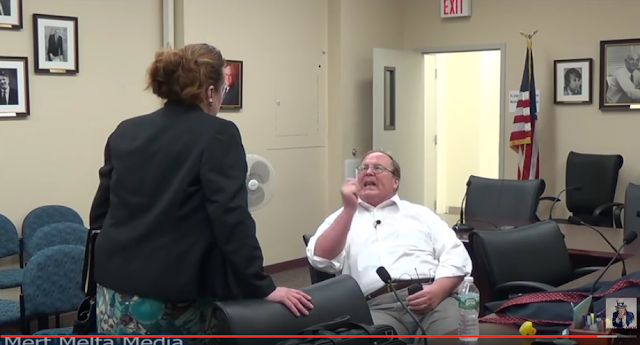 Final Thought -- Release the Dash Cams
As to the items at issue, Sandy Hook Facts sees no problem with the release of the Dash Cams or reports of the officers, redacted as necessary to maintain privacy of minors and witnesses, in accordance with Connecticut State law.   SHF is first and foremost a research site and those Dash Cams are evidence, and in fact, the items have been requested by Sandy Hook Facts as well.

Halbig and Wilson could have actually argued those facts honor and integrity.

Halbig will likely prevail at FOIC
Halbig's little pre-planned hoax tantrum aside, Sandy Hook Facts believes the Commission will order the documents released. That has been what appears to be the indicated ruling and Perpetua's leanings.

Mysteriously Missing
In Mert's video on his Facebook page, at the 5:00 mark, after Halbig stomps off, Perpetua tells Wilson he will not allow any of Halbig's tantrum to affect his decision. L. Kay Wilson responds "I appreciate that." 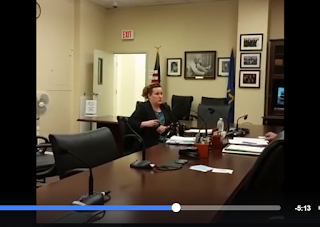 That very fair statement by Perpetua is mysteriously missing from his Youtube version, replaced by a perfectly timed transition effect.  My, my. 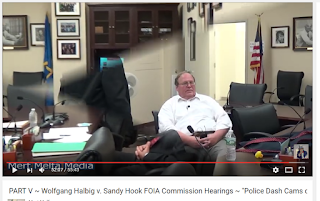 Connecticut State Police will appeal, and we will need to see it resolved in the courts.  The State Police position is consistently that the Dash Cams are seized property as part of an investigation and not subject to Freedom of Information Act release.

Whether it is seized property and what constitutes seized property was a very important legal issue that was not argued due to Halbig's performance.  Halbig never even discussed the officer's reports, leaving that issue for Perpetua to decide without comment.

Wild Card
The wild card, is of course, the FOIA "minor privacy" exemption. Newtown claims this exemption for Bahamonde and Chapman's dash cams, both at issue in this hearing. CSP did not use the exemption at all.  Newtown could conceivably intervene at some point, claiming the exemption on behalf of their residents.  It's likely a coin toss as to whether the court would buy off on using the exemption, if it is eventually claimed. It will be interesting if the case proceeds that route.

CSP refuses to release ANY item related to Sandy Hook, seized or not
Sandy Hook Facts disagrees with the position of the CSP because the CSP will not release more Sandy Hook Documents, seized or otherwise.  CSP has refused to release all the documents in the Altimari cause, but has also refused other items rightfully requested by FOIA, such as Ginsberg's audio analysis. That analysis is not seized evidence, it was created by direction of the Connecticut State Police at tax payer expense. Sandy Hook Facts is an unfunded volunteer hobby, and the expense of pursuing that appeal cannot be justified. 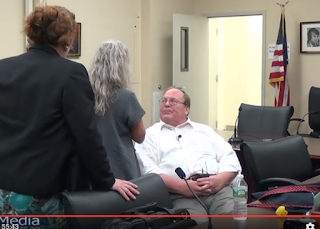 In Closing
You just witnessed a man put on a show. And you saw the rewards he seeks; people crawling over to hand him money. 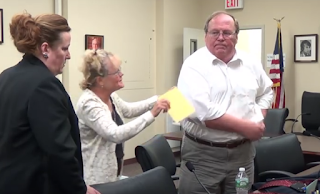 If Halbig is being truthful in claiming his own Lake County Sheriff has declared Halbig a "mental patient", I personally am not sure where that insanity would end and the crisis actor performance we saw on August 26th begins. 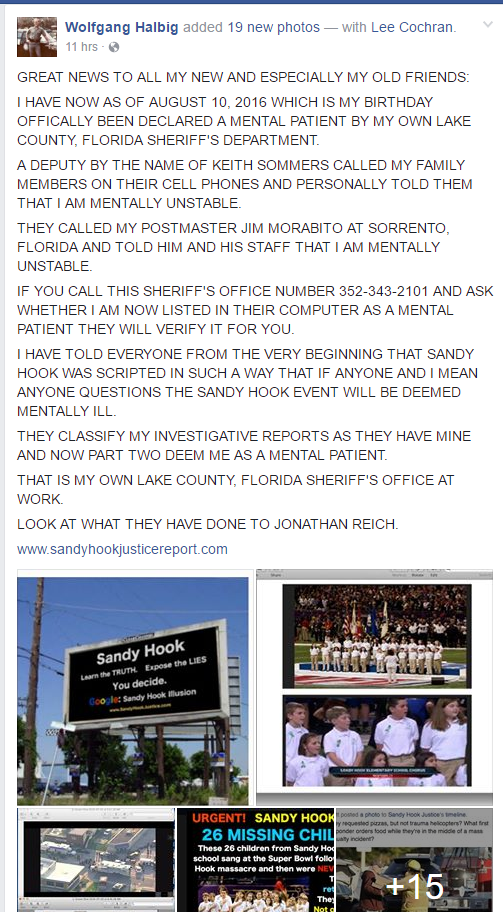 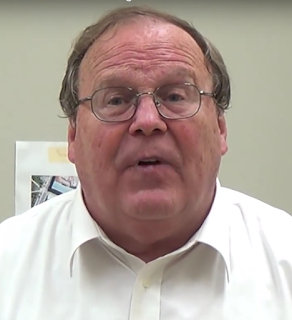 Presented by SandyHookFacts.com at 2:45 PM

I listen to his latest podcast, he is disappointed with Alex Jones's reaction to Hillary Clinton's statement and promised some big surprises. Acting like a child is the only surprise he made. People still believe him, support him and follow him like he is the Pied Piper of Hamelin.
I am wondering, how many times can he accuse people, of having committed a crime, without facing a lawsuit for slander. Do the accused people think, it isn't worth to sue him?

Bat-shit crazy. Attempting to claim that they don't have Sinko's dash cam because it has another CSP officers name on it, even though you can clearly see IT IS SINKO using the car, is at best, disingenuous. More accurately, dishonest.

Then this dishonest idiot goes on about his family being threatened and fearing for their lives....EVEN THOUGH this is exactly what HE has motivated other to do to the families of the victims!

Halbig is simply a piece of garbage.

Can you really call the sheriff's office and ask if he's a "mental patient"? Could they even release that kind of information? I wish someone would have him committed to a mental institution already.