The new Sandy Hook School is opening. I thought I would share this article about Neil Heslin, father of Jesse Lewis; a six year old boy killed at Sandy Hook Elementary School. 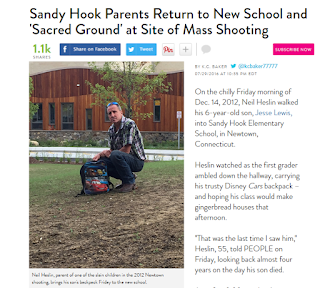 Please click the link to go to People.com and read the whole article.

Heslin watched as the first grader ambled down the hallway, carrying his trusty Disney Cars backpack – and hoping his class would make gingerbread houses that afternoon.

"That was the last time I saw him," Heslin, 55, told PEOPLE on Friday, looking back almost four years on the day his son died.

On Friday, Heslin returned to the site of his son's death – and now the site of the new Sandy Hook Elementary School, which opened to the public the same day.

"I brought [my son] to school with a book bag and hours later he came out of the school in a body bag," Heslin tells PEOPLE. He says he left the school that day in 2012 at 9:04 a.m. and sat in the parking lot until about 9:20 a.m., reading emails.

"I had just left the school when everything happened," he says.

'I Feel Numb'
On that terrible morning, Lewis urged nine classmates huddling in a corner to escape when the shooter's gun jammed, saving their lives, Heslin says. After Lewis yelled, "Run!" the gunman shot him in the head, Heslin says.

Presented by SandyHookFacts.com at 7:48 AM