I thought I would search Wikileaks and see what Sandy Hook information was revealed from the Hillary Clinton and hacked DNC emails.

The answer is: Not much to see.

There was only one email  referencing "Sandy Hook". The email subject was "Merry Christmas" and was from Anne-Marie Slaughter to Hillary Clinton with a cc to  Huma Abedin.  The email was sent on Christmas, 2012; just 11 days after the shooting.

The email referenced the content of this article:
http://www.theatlantic.com/sexes/archive/2012/12/the-gender-divide-on-gun-control/266612/ 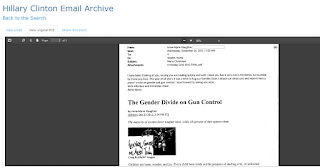 Rep. Elizabeth Esty
Hi everyone, thank you for joining us on the call and thank you to the other speakers for your attention to this issue.
Sandy Hook Elementary School in Newtown, Connecticut is in my district. I am sickened and horrified that in the three-and-a-half years since those shootings, nothing has been done to combat gun violence on gun reform. I lay the blame on the NRA and the Members of Congress who are beholden to them.
Despite the fact that 90 percent of Americans supported action on gun reform after the Newtown tragedy, the NRA and their allies worked to defeat the bill by spreading rumors and falsehoods. Meanwhile, news of shootings across the country still dominate the headlines.
Both of our Democratic presidential candidates have proposed solutions to address this crisis, and President Obama's executive actions earlier this year addresses this crisis with by expanding background checks, better effectively enforcing the laws already on the books, increasing mental health treatment, and funding research for gun safety technology.

Meanwhile the NRA is advocating for further deregulation of firearms, and they have found a willing audience in the Republican Party.

We've seen this play out over and over again over throughout the years. With the help of the Republican Party, the NRA defeated a bill to extend a ban on assault weapons, blocked a bill that would have extended background checks to guns shows, and passed dangerous "stand your ground" laws that are currently in effect in some form in 33 states in 23 states, including Kentucky.

The NRA and their legislative allies are making our country less safe. It is unconscionable that Donald Trump and top Republican leaders like Paul Ryan and Mitch McConnell continue to indulge this radical organization.

The NRA and its extreme, uncompromising leadership have blocked reasonable reforms to reduce gun violence. As a vice chair of the U.S. House Gun Violence Prevention Task Force, I am a strong advocate for commonsense gun reforms in Congress. We cannot allow the NRA to control the White House come November, and we need to block their influence in Congress.

I am urging the media on this call and voters to hold these people accountable. We can't cross our fingers and hope against hope for an end to gun violence. We need to make it happen.

Well, actually what it does provide proof of is , this was no "gubment" conspiracy. One would reason, if the "gubment" had a hand in this shooting or staging of an event and they had communicated planning or details via emails...Wikileaks would have been all over it, exposing it for the Hoax all the conspiracy people believe it to be.

Correction... There is no evidence Hillary's emails were hacked... the ones that were released were actually released by the State Department in response to a FOIA request.. as the Wikilinks link you posted actually says... So its inaccurate to say they are the result of a hack.