Sandy Hook Hoax Hoaxers - What kind of people are these?

The most important article exposing the true hoaxer to the main stream has been published.  This article is must read for anyone who has been a part of this battle.

Those of us involved in this know that the hoaxers are much worse than this article describes; but how much can really be put in one article?  This is a first bite of a multi-course meal of filth and dishonesty that is the Sandy Hook Hoaxer. 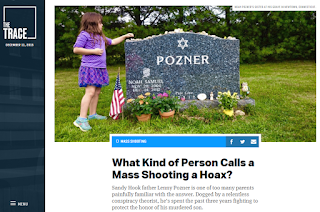 SandyHookFacts is proud to have been mentioned along side Lenny Pozner and the work he has done; a man I have come to personally admire greatly. Seriously.

One point from the article and a little back story.  The author wrote:

After Halbig learned of the complaint, he tried calling Pozner several times, leaving messages on his voicemail. He sounded alarmed, and said it was “urgent” that they speak. Halbig denies reaching out, but Pozner saved the voicemails and phone records from that period. I asked Halbig about the discrepancy. “That’s very strange,” he told me. “Never called him in my life.”

Unbeknownst to Halbig, the author, Mike Spies (@mikespiesnyc) had already listened to the voice mails Halbig had left Pozner; indeed, the author was thorough with his homework on Halbig and Halbigs support group, Sandy Hook Hoax Group. I wish I could have seen Mike's face while Halbig was lying.  Lying, exactly as Mike Spies had been told Halbig would lie. 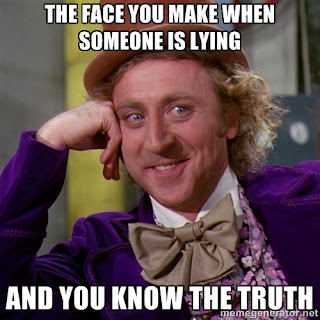 Catching Halbig in a bald face lie confirmed Halbig was not an honest man; caught in yet another whopper.  Nothing new to us at Sandy Hook Facts, but it's nice when an outside source sees what we have been saying.

It was around this time that Pozner began to fight back. Halbig’s sandyhookjustice.com had by then drawn a benificent counterbalance, blogs like sandyhookfacts.com, devoted to debunking every crackpot claim put forward by the hoaxers, whom they referred to as “conspiratards.” Pozner began to work with the blogs’ authors, who had no connection to Newtown or its residents, beyond a shared disgust with Halbig’s campaign. “This became my catharsis, my path to healing,” Pozner says. “It was how I was getting the pain out of me.”

I would like to add a nod to a couple of other independent blogs and channels that have carried on fight for real truth on Sandy Hook, exposed hoaxer lies, fraud, and/or enganged in comprehensive debunking hoaxers:

Keith Johnson - Newtown Post Examiner
There is no one in the research community that has obtain real expert analysis  and opinion in presenting his analysis.  Keith's debunking of hoaxers has been remarkable and the information he has published invaluable.
Keith's best work can be found from his Youtube channel:
https://www.youtube.com/channel/UCAZIxDYx_A3rTepHf2T78pw

Reed Coleman - Sandy Hook Lighthouse
The undisputed leader of in-depth research on several subjects related to Sandy Hook. If you don't read Reed's work, you will never understand Sandy Hook from a researcher's point of view.

Mike Flagg - Sandy Hook Tragedy Focus on Facts
A par none debunker and Sandy Hook researcher; no goofy Hoaxer claim is too small or too large for Mike to tackle.  He's debunked it all.

Arie Fique - http://sandyhooktruth.com/
Arie Fique's business is exposing the wretched hoaxer; and for Arie, business is always good. A controversial figure due to his hard hitting, pull no punches pieces.  Hoaxers love to claim Arie is this person or that person. Arie is Arie; if you got a problem with Arie, take it up with Arie.

And there are so many more that support HONR and HONR's goal of fighting for the rights of victims against hoaxer attacks, gangstandling, intellectual property theft, and general thuggary...

After Mike Spies article, for once,we can all take a bow. We can beam with pride that we call Lenny Pozner our friend and we stand with him against the evil hoaxer.

Presented by SandyHookFacts.com at 7:44 PM

The general public still has no idea what is happening in the blogosphere. Once the people of Ct are made aware as to the level of vitriol, dishonesty and danger these Hoaxers present to the victims families, a world of hurt and public shaming will take place. Hopefully sooner than later.

Others are listening to what you have to say. You're doing an amazingly good job.

You're doing an amazingly good job.

HI Wade did you ever write about ammunition used and polcie report listing wrong weight/type(apparently)
Thanks keep up good work.

I'm an anti-debunker but you do good work here. :)