It is almost beyond comprehension that a tenured Florida Atlantic University Professor is allowed to engage in his acts designed to target victims of violent crime, let alone Sandy Hook parents; yet James Tracy has targeted many of them. Chief among Tracy's targets are Lenny and Veronique Pozner.  The Ponzer's have penned an article exposing some of Tracy's tactics. The article only scratches the surface of how atrocious Tracy is; for example, the article does not discusss when James Tracy targeted a little young girl named Lennie Urbina.

What kind of person targets a little girl? I think we all know which type. The worst of the worst.

The fact James Tracy would target a elementary school aged little girl with a blog post should raise  grave concerns as to Tracy's state of mind.  It's time the "village" take a good look at who is lurking about targeting the families and little girls. It takes a village to handle the village monster. 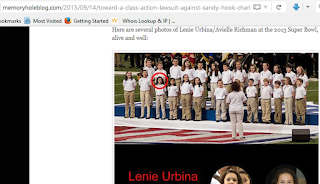 Sandy Hook Facts is very proud to stand with Lenny Pozner as he speaks out against the despicable and evil Florida Atlantic University Professor named James Tracy.

Lenny has shown untold bravery in standing against those who would target victims of high profile crime.  I thank Lenny for his hard work and his willingness to stand for what is right. 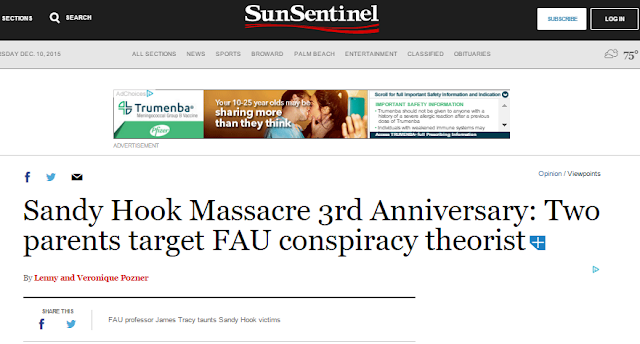 
It’s been three years since we last embraced our precious little boy, Noah. At six-years-old, he was the youngest child murdered at the Sandy Hook Elementary School. While our family may have managed to live through this tragedy, the passage of time has nowhere near dimmed the vivid memory of that day nor made it any less difficult for us to cope with the pain and anguish of losing our only son.
The heartache of burying a child is a sorrow we would not wish upon anyone. Yet to our horror, we have found that there are some in this society who lack empathy for the suffering of others. Among them are the conspiracy theorists that deny our tragedy was real. They seek us out and accuse us of being government agents who are faking our grief and lying about our loss.
Each new high-profile act of violence inspires more conspiracies and creates new victims of harassment and defamation, whether it be the Boston Bombing, the terrorist attacks in Paris or the most recent massacre in San Bernardino, CA. In that instance, a lawyer for the family of the shooters said Sandy Hook did not happen. And don't get us started on Donald Trump and his rantings on the Alex Jones radio show. It is obvious by the demographics of the show's audience that Trump appeared as a guest looking for votes from the conspiracy crowd.

Presented by SandyHookFacts.com at 7:16 PM

i've said it before - and i will CONTINUE To say it every time a story like this surfaces:

After the MILLIONS donated to Sandy Hook - not ONE single lawyer has been retained to go after these vermin. I would sue the University and this 'professor' for slander and defamation and harassment and inciting violence and gang stalking.

i do not CARE whether anyone believes the case is WINNABLE. that is not the point. we need to FORCE a response - force the spotlight onto this university - force it into the media - force them to EXPLAIN themselves publicly.

This BUSINESS of allowing these vermin to operate - with impunity - in the darkest corners of the internet has to stop! we need to stop playing in THEIR arena and force them into OUR arena - the legal system and media.

Let them pony up the legal fees to defend themselves. Let's HEAR what POSSIBLE defense they have - PUBLICLY. not in blogs. in court and on national cable news TV.