Wolfgang Halbig is desperate to get out of the Connecticut lawsuit brought by Sandy Hook families.  Sandy Hook Families are currently suing Alex Jones, Wolfgang Halbig, and Cory Sklanka for their defamation and other harm.
https://www.washingtonpost.com/news/the-intersect/wp/2018/04/17/heres-why-sandy-hook-parents-and-others-are-suing-alex-jones/?noredirect=on&utm_term=.d54b1411d769

Wolfgang Halbig  is a prominent public figure hoaxer leader who claim the Sandyhook shootings were a government hoax. Hoaxers g nerally claim the families were “crisis actors” who are lying about losing their children and family for profit, fame , and to take people’s guns.

One of Halbig main goals is to create distance between himself and Cory Sklanka, aka "Sleight of Sin".  With Cory Sklanka in the case, the Federal Court has no diversity jurisdiction and the case will be heard in Connecticut state court.  Alex Jones is even citing Halbig's false affidavits as their "proof" hoping to prove Sklanka was "fraudulently joined".

This can be proven because Sklanka himself filmed some of his Halbig work and posted it online.  In fact, it's still available on hoaxer channels!

Despite the readily available proof, Wolfgang Halbig has filed an affidavit stating "I did not know Mr. Sklanka at the time" (of the hearing).  Here is the relevant portion (document in full below). 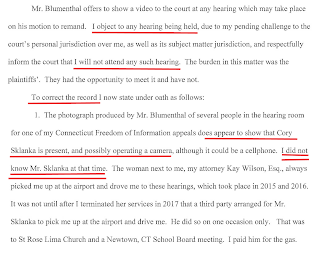 In the above statement Wolfgang is refusing to attend any hearing where the Plaintiffs would play a video proving Halbig's previous affidavit was false.  I don't blame him. That would be embarrassing for Halbig.    Previously, Halbig had told the court that Cory Sklanka "did not operate any camera; he did not have a camera; he has never touched a camera in my presence."  He also claimed Sklanka did not "co-host any broadcasts with me."

Wolfgang can rest easy because there will not be a hearing; the Court already ruled against him; citing in part, the fact that Halbig's claims had been rebutted.  Order for Remand.  Halbig's first affidavit is discussed by the Court on Page 10 of the Order. 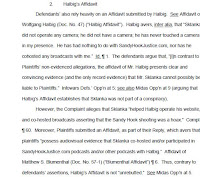 In the screen capture from the April 24, 2015 hearing Cory can be seen operating the camera and talking with another Sandy Hook Justice member, Jonathan Reich.    From left to right are  Cory Sklanka with headphones operating a camera rig;  Dan Bidondi of Infowars with Camera rig; Jonathan Reich wearing a baseball cap, and Wolfgang Halbig, staring straight at Sklanka. Halbig is sitting next to his long time attorney, L. Kay Wilson.  Wolfgang's claim Cory "never operated a camera" is completely false.


Cory Sklanka - Agent of Wolfgang Halbig to the Commission

The day after the hearing, Wolfgang Halbig, in a broadcast with Sklanka (aka SOS, Sleight of Sin), discussed the advice he received from Sklanka BEFORE THE HEARING.

Here are short video clips disproving Halbig's claim that he "did not know Mr. Sklanka". 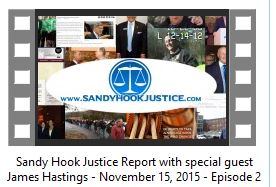 Perjury before the Court
The fact is, perjury is a crime.  Wolfgang claims he did not know Cory Sklanka prior to 4/24/15, among many other statements regarding his relationship with Cory Sklanka, are demonstrably false.  The authorities should investigate to determine if Halbig committed a crime.

It remains to be seen if Cory Sklanka and Alex Jones are going to continue to support Halbig's false affidavits.


More detailed information is below. 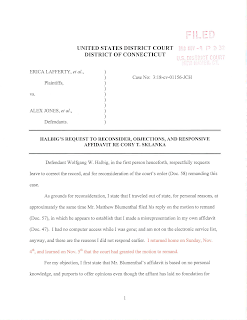 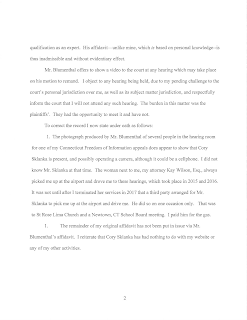 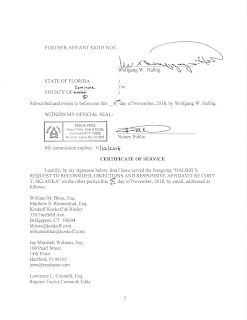 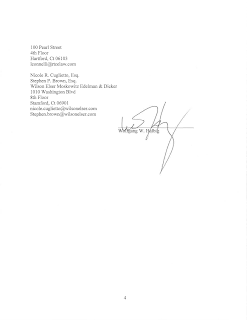 Here is the full video of Wolfgang Halbig's agent, Cory Sklanka, visiting the Connecticut FOIA Office.  Cory secretly recorded the interaction and posted the video online prior to the 4/24/15 hearing.  An archive of the video posted to a hoaxer channel is available here:  http://archive.is/0MkCE  As can be seen, that video was posted April 8, 2015. Well before the hearing.  As of this publication, the video is still available on that channel. 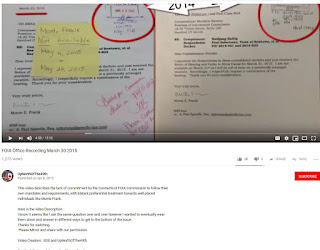 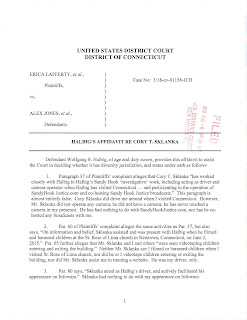 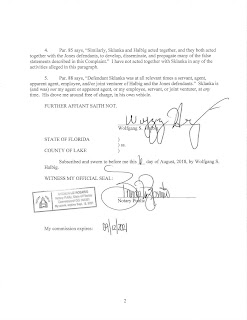 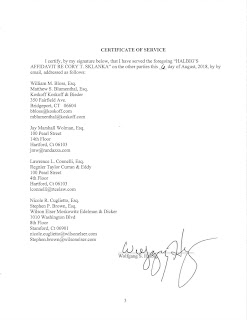 Presented by SandyHookFacts.com at 5:41 AM

Wade, thanks for the updates! The tide IS turning against these morons. Lawsuits headed in the right direction, harassers arrested and taken to jail, Youtube closing hoaxer sites down...