If you know Sandy Hook Hoaxers, you are familiar with Peter Kusznir aka "Peekay".
Peekay operates three channels on Youtube (Peekay Truth, Peekay Boston, Peekay22) and has about 20,000 subscribers.

Peter is an "auto hoaxer". That is, he watches news reports and from his monetized Youtube channel he declares nearly every high profile killing a hoax and a Jewish plot to take guns.  With each racist attack video, Peter shills for donations for himself. 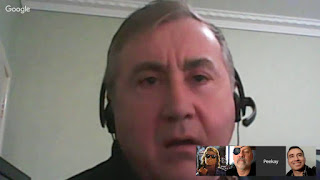 Australia has looked the other way as Kusznir stalked and harassed victims of the Boston Bombing,  Sandy Hook, and the Nice truck attack (to name but a few); apparently they decided to take notice when he turned his attention to stalking his fellow Australian citizens.

Australian Press is reporting that Peekay was caught stalking Melbourne Bourke Street victim Natalie Hakin.  Hakin was injured in the attack and her daughter was killed.

As a result of the stalking, the Police issued a restraining order against Kusznir along with a court date.


Hoaxers love stalking wounded people
Nothing fuels a hoaxer quite like stalking the parent of a deceased child.  If that parent is actually wounded and female; that would surely make that person all the more attractive prey for the hoaxer.

Peter made several phone call to hospitals attempting to get the victims location so he could "visit her".  What violence Peter Kusznir planned for the woman if he got near her is not really known; suffice it to say she was in very real danger had Kusznir been given access from hospital staff. 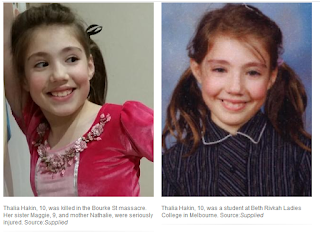 Side note on Peekay's close friend Robin Wiegal:  According to sources, Robin Wiegel will soon be in legal hot water for his stalking of Pulse victim, Angel Colon. Robin engaged in very much the same type of activity as Peekay; stalking the victim while they are in the hospital.

Victoria Police finally figured out they are dealing with a deranged stalker and issued a Protection Order restraining Peter Kusznir from the woman. A restraining order is merely a piece of paper; so lets hope the Police do more to protect her from this mad man.

What makes Peter Kusznir a Terrorist?
I've mentioned Peekay a few times; however, he does not really put out content that catches the eye of the debunker as he is not really a factual based person in what he presents. Peekay essentially scours video news reports with running commentary he believes "proves hoax". Basically, he just talks his way through someone elses video.

Peter's subscriber base is one of the darker elements of Conspiracy Theorists because of Peter's Boston Bombing video.  Peter's "bread and butter" Boston Bombing video is basically to take a photo of a mangled victim, lying in their own blood, and mock them for 15-20 minutes with idiotic commentary.

As an aside,  I did debunk Peekay (and point out he is a victim predator) in this article:
http://sandyhookanalysis.blogspot.com/2016/07/truck-used-in-nice-terror-attack.html

Let me digress and address Melbourne's Bourke Street incident.  Peter has published videos demanding police release video of a victim being run over as "proof".  Bodies and blood are not proof to Peter Kusznir; they fuel dark-hearted attacks.    If the police did release such a video to Peter, he would take that video and mock that victim mercilessly; of that you can be sure.  Just look at some of his videos

While these facts demonstrates Peter's evil and cruelty,  it is not what makes him a terrorist.  Peter takes it a step farther and attacks victims and their family in personal ways.

One of Peekay's primary terrorist tactics is to locate the social media of a crime victim and attack and stalk them relentlessly using threatening, filthy language designed to intimidate, instill fear, anger, and hurt the victim.    Furthermore, he commands a small legion of trolls, and uses those trolls to aid him in his terrorist attack.  He calls these attacks upon victims "Truth Bomb".  Peekay's "truth bomb" usually consists of calling finding a woman, calling her a "C Word", threatening them, yelling at them, abusing them, and generally attacking them and their family. "Truth" to a hoaxer.

While Peekay stalks and attacks many victims; I've decided to present a prior instance of Peekay stalking a wounded female.  The instance stuck with me because it was on of those pivotal points in my thinking when I realized that hoaxers were not merely people with weird, wild-eyed opinions; many are predatory, violent, animals who do real harm; these hoaxers really need to be stopped.

Peter Kusznir has proven himself to be just such a predator, many times.  Peter especially enjoys attacking and stalking women; a wounded woman is a very attractive target to the Australian native. 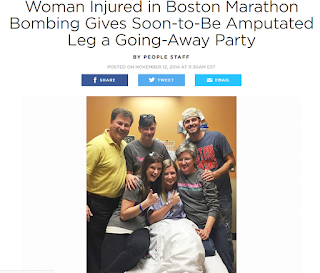 Dimartino survived the bombing; however, her leg was severely wounded.  Nearly two years and several surgeries later,  it was decided her leg was to be amputated. She posted a series of Youtube videos in the lead up to the surgery, including a videos where she was saying "Good Bye" to her leg.

Peekay found her videos and his target.  He and his army of trolls attacked and stalked the woman relentlessly. It was beyond disgusting.   I watched this first hand was was posting to her page attempting to help Dimartino fend off Peekay and his trolls and making sure she knew exactly who she was dealing with.

She made a video attempting to reason with the conspiracy theorists; however, that only fueled the fire.  She made several posts. She made videos showing her leg attempting to prove to the hoaxers it was all real; however, evidence a hoaxer is wrong only fuels the hoaxer to more stalking and more lies.  Rebekah learned this first hand. 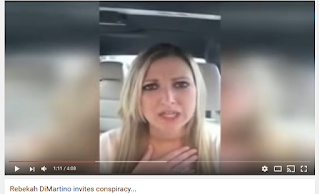 No criminal charges yet.

Let's hope Australia does the right thing and arrests Peekay and charges him.  He is well overdue for jail time.

If Australia continues to look the other way, it is only a matter of time before he or one of his trolls finally get the location of one of their victims and does them very real harm. 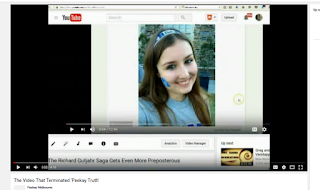 Presented by SandyHookFacts.com at 8:01 PM

The person accused of committing this crime which killed six young people, ranted about the Illuminati on Facebook and was yelling the word 'sheep' out of the window of his car on the way to the scene. Sound familiar?

More and more, the disgusting, delusional trolls like Peekay are going to be held accountable for their actions and for the actions of those they attempt to motivate to harassment and violence...and it's about time!

I hope next to be bitch-slapped is, Robin Weigel.

hahahaaha, And he should stalk you to! fucking kike loving cunts!

Video release just the other week SHOWS the car, pulling up and driving down the sidewalk as it hits some people:

Just goes to show, these idiots are completely unable to do research AND...they always factually incorrec.t