"[Halbig] has filed many requests with agencies in the Town of Newtown ... related to the tragedy which occurred there on December 14, 2012 which the complainant has publicly stated didn't happen.  [His] frequent derisive insulting emails to the town and this commission are tantamount to harassment."  - Connecticut FOI Commission

Halbig was once again seeking the identities and documents of little school children from their school. The Commission will not even hear his ridiculous and disgusting arguments.

This is the third and fourth Halbig cases the Commission decided without granting Halbig a hearing. The first two were in November, 2016:
"Wolfgang Halbig denied identity of minor children"
http://sandyhookanalysis.blogspot.com/2016/11/wolfgang-halbig-denied-foia-identify-of.html

The final determination will come today, 2-22-17, at the meeting of the full commission.

The Executive Director of the Commission decided not schedule a hearing on  Halbig's repeat requests for documents related to the 2013 Super Bowl trip by the Sandy Hook Choir.

Hoaxers, in general, absurdly believe the children who sang at the Super Bowl are the same children who died (aged 6 plus years) during the 2012 Sandy Hook massacre.  Halbig seeks a number of documents, such as "children permission slips" that would not be obtainable even if they did exist. Obviously, children's school records are not subject to Freedom of Information.  Newtown has repeatedly told Halbig they do not have the documents. 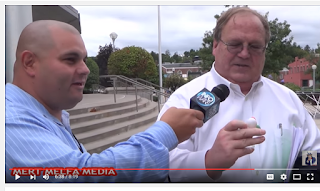 The vote, expected today, is that the Commission will not hear Halbig's hoaxer nonsense in regards to this issue.

One example of Wolfgang Halbig's hoaxer nonsense on this is issue is his claim that the NFL "placed a gag order" on the children.  Halbig tells this lie to encourage people to donate to him; however the statement is 100% false.  Halbig has no evidence of this "Gag Order" and in fact, when Sandy Hook Facts offered $5,000 to Halbig to produce a "Gag Order", Halbig failed.  Recently, Halbig has been saying that the children must be dead or kidnapped.

Here are parts of the ruling:

Wolfgang has a history of abuse of the Commission:

Full ruling- Note the commission decided the same in FIC 2016-0208 and FIC 2016-559 with Notice of Decisions that essentially read the same: 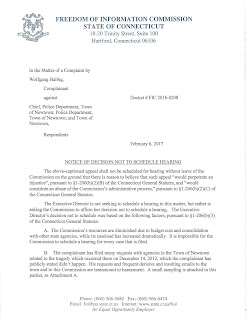 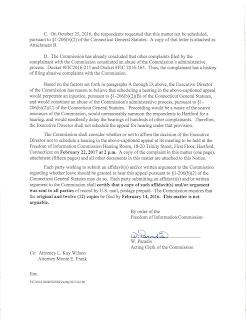 Presented by SandyHookFacts.com at 5:46 AM