Wolfgang Halbig and his Hoaxers in FULL LEGAL RETREAT

Wolfgang Halbig has filed a motion hoping to avoid discovery and Jonathan Reich has chosen to sit in prison hiding from his Connecticut case. Just what are these hoaxers afraid of?

After three years of making claims that they were going to use court cases to "expose Sandy Hook", Wolfgang Halbig's legal strategy appears to be "full retreat on all fronts".

Halbig Desperation to avoid Discovery
In Pozner v Halbig, Halbig is desperately avoiding discovery.  He is refusing to comply with even the simplest Florida Civil Procedure regarding discovery and has filed a motion to strike Plaintiff's Motion to Compel Discovery.
The case may be viewed here:
https://courtrecords.lakecountyclerk.org/showcaseweb/#/caseDetails/1335568/dockets

Halbig did not timely object to discovery.  Halbig simply wants the judge to declare, essentially, that Halbig never has to comply with discovery.  Halbig is relying on the fact that the court previously required Pozner to refile his Motion to Compel.  Halbig's illogical reasoning consists of re-arguing the previous hearing and claiming that he did not receive service (even though there has already been one hearing on the matter, which Halbig attended, so he has obviously been served.)


Halbig, of course, throws in the conspiratorial (and irrelevant) wide-eyed paranoia that has made him the leader of the hoaxers:

That's right, Halbig has been avoiding Discovery since July, 2016! That is almost as long as Jonathan Reich has been hiding from his case. This seems to be a pattern with the Sandy Hook Justice crew.

Instead of complying with Florida Civil Procedure, Halbig's filed a motion to "strike" Pozner's Motion for Temporary injunction asking the judge to essentially dispense with the legal system and declare the case a "sham", even though Halbig provides no legal basis for such a ruling:

It makes you wonder, just what is Halbig afraid of?  Halbig has presented no evidence of hoax and is reduced to republishing nonsense irrelevant, unrelated emails he claims  he received "threatening him" and hoping the judge will strike Lenny's motion simply "because".  His Motion to Dismiss was stricken because he filed it untimely; his opposition to discovery is as untimely. With his Motion to Dismiss stricken; Halbig believes he can win with what is esentially a "Motion to Dispense with the entire justice system and declare me the winner".  A person who represents themselves has a fool for a client has never been truer.

The court previously made it clear the parties must comply with discovery,.

From a legal standpoint, Halbig's argument makes no sense because the discovery phase cannot simply be stricken by the court, even if the court wanted too.  Halbig is dreaming the impossible dream.  The court was very clear this was the time for discovery and now Halbiig is obviously running scared.


Halbig continuing to refuse discovery will not likely sit well with court, but the court appears to be showing the conspiracy theorist leader more than his due share of patience.  Pozner has followed the  explicit direction of the court and re-filed his Motion to Compel to dsivoery.

And the court tried to tutor Halbig; which Halbig obviously ignored: 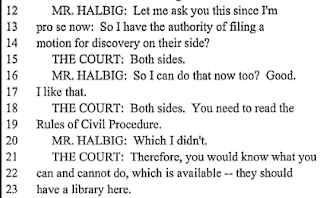 Halbig avoided the ruling last hearing; it is doubtful he would get lucky at the upcoming Feb. 20 hearing and continue to avoid discovery.

The only real question is whether the Judge will finally award Pozner sanctions for having to deal with Halbig's frivolous filings?

For Pozner's side; the judge will likely grant a customary extension of time to file objections to many of Halbig's ridiculous and mostly irrelevant discovery requests.

Wolfgang Halbig and the entire Sandy Hook Justice crew have raised abouting $100,000 promising to use the Jonathan Reich criminal case to get Dr. Wayne Carver on the stand and expose Sandy Hook.  They also promised to use discovery to attempt to get the full unredacted report.
http://sandyhookanalysis.blogspot.com/2015/12/jonathan-reich-uses-criminal-case-to.html

It looks like those promises are out the window as Reich now seeks to avoid trial all together.

Wolfgang's crew is even hoping the Governor of New York will intervene and either keep Reich summarily jailed and/or prevent extradition.  Why are these hoaxers acting so afraid of their cases?

It makes you wonder if Reich is even competent.  Avoiding a small misdemeanor case by sitting in Rikers Island Prison for 90 days does not seem rational. It seems insane! 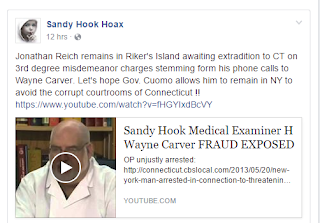 The hoaxers are attempting this latest about face and ruse despite the fact that Halbig's crew has promised their donors that it was Connecticut avoiding trial.

An example of their past lies: 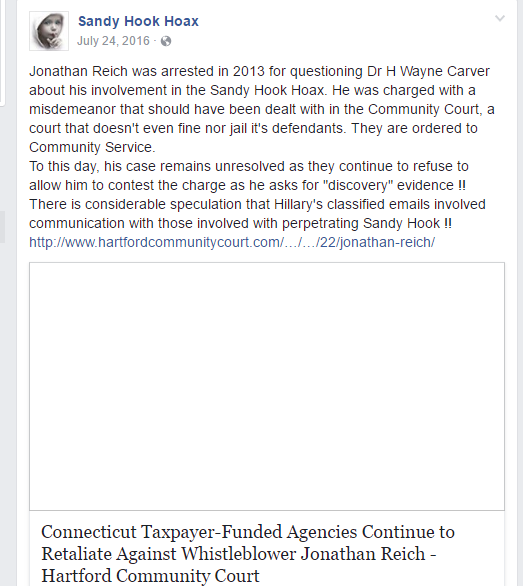 Now they suddenly would rather have Reich in jail?

I have no doubt his donor cult will not be able to see the obvious lies Tony pushes.

Tony's post freely admits Jonathan Reich is desperate to avoid extradition.  Inexplicably, Reich has opted to sit in New York's Riker's Island Prison for 90 days without trial rather than face trial in Connecticut, where he faced only 60 days maximum penalty.

Let that sink in.  90 days in Riker's to avoid a possible maximium of 60 days in Connecticut, even if found guilty.  There is no one naive enough to think Reich would ever get the maximum possible sentence.

Even if New York let Reich go at the end of 90 days, the warrant for his arrest would remain out and his case in Connecticut would remain pending.  In other words, Reich's desperation to avoid trial is for nothing.

Is there a sealed indictment that Reich is aware of that we are not?

As previously reported, Reich's lawsuit versus Patch.com is dismissed.

Sandy Hook Facts predicted the dismissal in articles and videos.  The case was obviously defective and aptly demonstrates the utter trail of legal fail blazed by hoaxers. 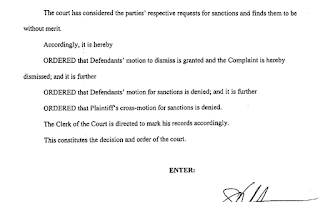 Shanley apparently specializes in filling pages with rambling nonsense and filing it into a court cases.

Shanley's hoaxer lawsuits and nonsensical filings have all failed miserably, receiving summary denials; we can anticipate the same result with his latest nonsensical filing, adding to his long list of abject failure. 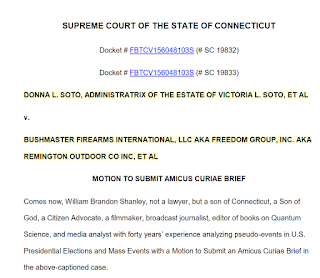 The only real question is...
what are the hoaxers so afraid of?

If these hoaxers really had a case, wouldn't they want to go to trial?

It would seem the gig is up on Halbig and Tony's fundraising  hoaxes as they are exposed by their own actions and failures.


Presented by SandyHookFacts.com at 5:03 PM

So strange...isn't this what they've been dreaming for...a day in court with discovery...now it's like...nah we're good nothing to discover here. Still waiting on those documents Wolfie...taps foot.

Does this mean that Reich would be released after 90 days? Why isn't he just being extradited to CT already?

What's sauce for the goose, is sauce for the gander! Halbig is AFRAID of being expose to be the fat-ass, delusional, money-grubbing charlatan that REAL people know him to be.