This week Wolfgang Halbig and Sandy Hook Hoax group have been using this photo as their latest fund raising gimmick: 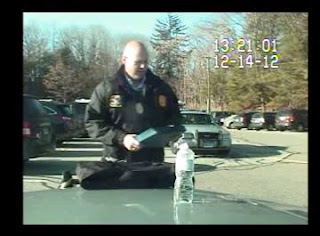 Halbig's claim that this is a photo of Connecticut EMS Director Region 1 Director Robert Kenny. Wolfgang accuses Mr. Kenny of dressing up as a State Trooper. Since Mr. Kenny's position is non-sworn, unarmed, administrative position, this is accusing Mr. Kenny of very serious crimes.

Halbig's claim was made without a shred of evidence or investigation; based on similarity of this photo from  the state EMS website.


Wolfgang further adds to the narrative, stating that Mr. Kenny is handing out "Evaluation Packets" at a drill and accuses him of delivering sandwiches and bananas to be eaten near the bodies of dead children in the Sandy Hook Elementary school; in addition to other disgusting claims.

You may hear these absurd claims broadcast during his public appearance here:
https://youtu.be/X9WX0U0X82w?t=50m00s

This type of hoaxer misinformation is meant to instill fear in the "doom and gloom" conspiracy theorist followers. This causes the weak minded paranoid people to donate funds to Wolfgang Halbig because he uses these gimmicks as part of his money pitches on internationally broadcast public appearances.  After all, to a hoaxer, is there someone more scary than a Connecticut EMS Director?

Opposite of the hoaxers; rather than using photos and invented FALSE narratives to raise funds, SandyHookFacts conducted a simple, free, email public information request through the Connecticut State Police PIO office and the State Police timely responded.  As part of the request, we sent them a screen shot from the Dash Cam and asked for the Trooper's name, rank, and troop assignment.  Thus, with a few moments of actual research, Sandy Hook Facts ascertained the identity of the trooper in the dash cam

Sir, the trooper in the photo is Sgt. Troy Anderson and he works out of State Police Headquarters in Middletown, CT.
Thank you,
Connecticut Department of Emergency Services and Public Protection

Since Wolfgang Halbig claims to be a former Florida State Trooper including homicide investigator, Federal Customs Agent, and an investigator of school shootings including Columbine, one must impute to him a level of diligence appropriate to that experience.  One cannot chalk it up to simple "error", such as one could do for wild eyed psychologically ill convicts making Youtube videos worried about Jade Helm and Walmart boogeymen.

Halbig's experience enables him to make tens of thousands of dollars making false claims; therefore, one must hold Halbig accountable for his statements.  Halbig's decades of experience means he is aware of how to at least do a cursory investigation before accusing people of very serious felonies.

Therefore, one must conclude Halbig is passing along intentional misinformation as part of his whirlwind fund raising tour.  His comments mislead.  It is unknown how much money Wolfgang has made making off of these misleading claims as thus far he has not made that information public.

The unfortunate part is that Wolfgang Halbig has turned the focus of his false claim fund raising from going after Connecticut  Agencies to persecuting independent bloggers and youtubers and doing so to intimidate them and to destroy their First Amendment right to free speech.

Presented by SandyHookFacts.com at 6:05 AM

This is typical of the Hoaxers, creating their own reality and blaming the reason that delusion doesn't align with fact, the nefarious activities of others.

How long will it take for these idiots to understand Halbig is to Criminial Investigation as the Partridge Family is to Rock and Roll?