While I had hoped Scott Baio and Renee Baio might have some dignity and self respect, that did not turn out to be the case.

Renee Baio doubled down, attacking Nelba Marquez-Greene. As is customary, Nelba handled the tweet with the grace and humility.  If you don't follow Nelba, you are missing out.

Specifically, Renee Baio tweeted at Nelba Marquez-Greene—the mother of Ana Grace Marquez-Greene, who was killed in the 2012 mass shooting suggesting that the young girl was better off dead than living with her mother, insisting the bereaved mother's “ugliness knows no bounds.” 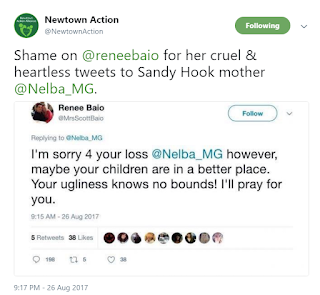 It is shocking to see such a great woman and family treated in this manner by the Baio's.  Only the worst hoaxer inclined nutjob could say such a thing to a mother who lost a child.


Update:
Scott Baio fans are swarming the internet denying the tweet. Are the Baio's going to deny the tweet? To date, no public apology has been made by the Baio's which would certainly aid them if they wanted to lie and claim that the tweet wasn't made.
Presented by SandyHookFacts.com at 6:31 AM