Grief trolls we all know as Sandy Hook Hoaxers are beginning to receive international condemnation.

One of the largest newspapers in Germany, Süddeutsche Zeitung, with 1.1 million daily readers, has published an article discussing Lenny Pozner and his plight to protect the dignity and name of his murdered son.  The article also shines light on the Sandy Hook hoaxers.

The article is in German, which presents some difficulty; however, for those interested, the article  is published online here:
http://www.sueddeutsche.de/politik/verschwoerungstheorien-noah-lebt-nicht-mehr-1.3171413?reduced=true

The site requires a subscription, so you can view a pdf of the article here:
https://www.pdf-archive.com/2016/09/27/noaharticle/noaharticle.pdf 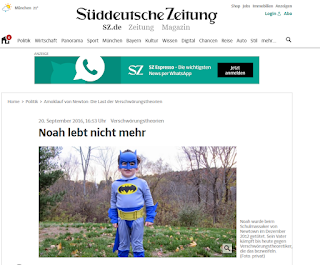 
Surpurzel's presentation
"This article is not just [about] the attack. It's more about the the grief of Lenny Pozner and what hoaxtards did to him over the years".  She continues that this type of article is rare and most Germans are not aware that "there are trolls that go after grieving parents".

She explains how Lenny had "had enough of [hoaxer] lies" and uploaded 100 photos of Noah to his Google feed.

The article explains about the daily attacks and death threats he receives.

"Die Hoaxer"
The German term for the hoaxer has a ring to it!  "Die Hoaxer" is what Germany calls The Hoaxer.

It is not without some irony that the first hoaxer to be lambasted for their hoaxer grief trolling in German press was the German born hoaxer, Wolfgang Halbig.

The article introduces Halbig to his home country with a paragraph that translates:

Pozner believed at first that he could convince the conspiracy theoreticians. [He] tried it with official documents and photos.  He attempted to contact a person , who doubts particularly loud – Wolfgang Halbig, 70 years old, Germany born. Pozner wrote an email with the request for a discussion.
Halbig had gone before the local education committee in Newtown. He had 16 questions [and only] if these are satisfyingly answered, was he ready it to recognize the official version of the story.
One of Halbigs questions read "Why parents of those two children who died in the hospital, have refused to donate their organs?"

To the email of Lenny Pozner, Halbig answered:  "Wolfgang does not want to speak with you, it is, you exhumes the body of Noah and proves to the world that you lost your son.

How disgusting can Halbig be? Really.  I'm very glad to see the German news source for 1.1 million Germans disgusted by this man and exposing him for what he is.

For your bemusement, if you  want to hear Wolfgang speak German (and get a good laugh at his fail), it's posted the video "Wolfgang Halbig's Sandy Hook Hoax"
https://youtu.be/Sn_vZHzSb5A?t=1m20s


The video is filled with information exposing Wolfgang Halbig's hoax upon his followers.

Presented by SandyHookFacts.com at 9:17 PM